Rucha Wankhede · Dec 18, 2015
Rank C1 - EXPERT
A University of Utah-led study by biologist Nitin Phadnis has identified the long hunted hybrid inviability gene ‘gfzf’ responsible for a dead or infertile offspring when two species of fruit fly mate with each other. The cause for this phenomenon is speciation, the process by which new biological species arise with the evolution of reproductive barriers as hybrid sterility or inviability between populations. The species are called ‘new species’ when there exists these barriers that prevent them from breeding with each other. Identification of these genes and understanding the molecular basis of sterility has been a long unsolved ambiguity of science since the times of Darwin. 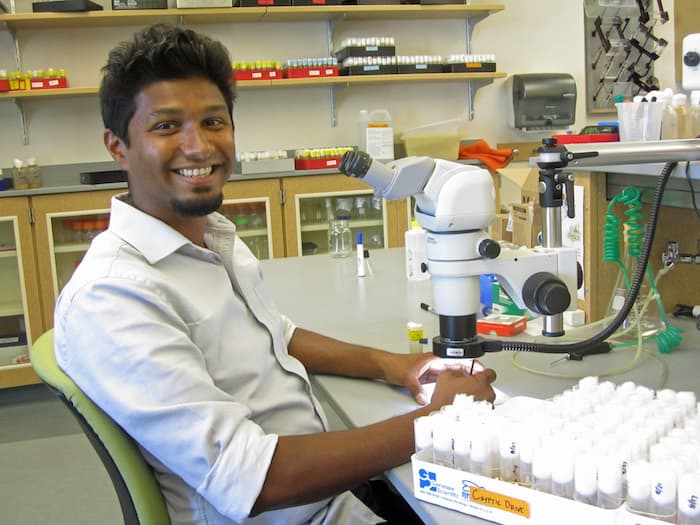 Nitin Phadnis, a University of Utah assistant professor of biology
​
This discovery can really be important in the understanding of cancer biology. This gene that makes the fruitfly hybrids inviable is in fact a ‘cell-cycle regulation gene’ or a ‘cell-cycle check-point gene’ normally involved in bringing to halt cell division and replication if defects are detected. But when mutated, in the study, it resulted in the survival of the male hybrids of the two fruitfly species.

Cancer biologists are interested in cell-cycle checkpoints because cancer results when these checkpoints go haywire thereby producing uncontrolled division of cells. This goes to show that some of the components in cell cycle patrolling machinery maybe quickly changing. Scientists precisely want to study this machinery which would help in evolving the cancer-cure studies.

The study involved two closely related species of fruit flies found worldwide: Drosophila melanogaster and Drosophila simulans. The hybrid offsprings of two species are not viable, the answer to ‘why’ of this question successfully solves one of the most celebrated cases in Speciation studies.

Two more hybrid inviability genes have been identified by scientists in last decade namely-Lhr (lethal hybrid rescue from D.simulans) and Hmr (hybrid male rescue from D.melanogaster). If either gene is absent Hybrid males survive, however data indicated an unknown third gene was also required too to make hybrids dead or sterile.

Identification of these genes is extremely difficult as it involves breeding to identify genes responsible for a specific function or dysfunction and if the hybrids populations are dying, there is no natural mutant of the newly identified inviability gene to isolate in natural fly populations. The researchers however overcame the traditional barriers by using next generation sequencing of their genetic blueprints.

55,000 male D.simulans species were fed with a mutation-causing chemical and these were then mated with normal D.melanogaster females. It was determined which mutated genes sanctioned some male hybrids to live. The male hybrids normally die during transition from larval to pupal stage and never become adults flies. Out of the 32 living male hybrids only 6 survived owing to mutation that immobilized the yet-unidentified hybrid inviability gene.

The sequencing of genomes and genetic blueprint of those six hybrid male flies was compared to the non-mutant strain of D.simulans parent flies. It ceded a clean consequence of only a single D.simulans fruit fly gene mutant in all six hybrids on the third chromosome named gfzf.

The research is sure to provide a facile means to accelerate further studies in identification of hybrid incompatibility genes opening up avenues for additional advances in the field of Science.

IBM To Come Out With Commercial Nanotube Transistors