@Kaustubh Katdare • 30 Jul, 2013
Sony Xperia Z Ultra has been launched in India with a price tag of Rs. 46990. This 6.4" phone+tablet (aka phablet) will be available on eCommerce websites and retail stores starting 2nd August. Sony had announced the tablet in China a few days ago - and it's company's first tablet that features full 6.4" display that operates at full HD aka 1080p resolution. Viewing images and videos is going to be a retina-pleasing experience for sure. Sony's engineers have packed the TRILUMINUS display in this gadget - this is the same kind of display used in top-notch high definition televisions. 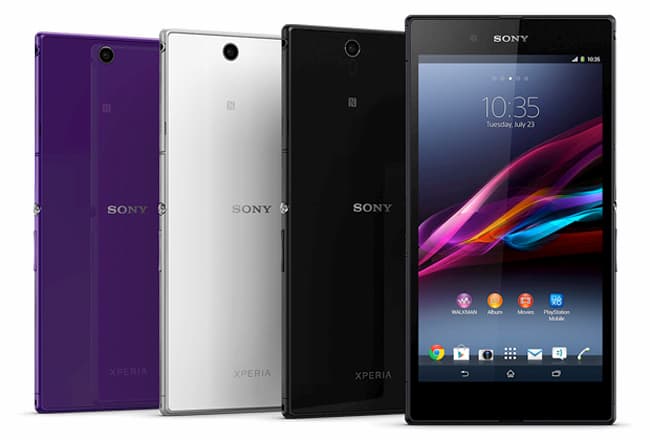 Under the hood is a 2.2 GHz, quad-core, Snapdragon 800 CPU that runs in association with a cool 2GB of memory (RAM). The whole unit is powered by a 3000 mAh battery. Sony claims that when run in the STAMINA mode, the battery allows for over 16 hours of talk-time and approximately 800+ hours of standby mode.

There's an 8MP camera with 16X digital zoom with full HD video recording capabilities. On the front you'll have a 2 MP camera ideal for your video conferencing and call needs. Sony packs 16 GB of internal storage which can be expanded to about 64GB using standard microSD cards.

As expected, the tablet runs latest Android 4.2 Jelly Bean but soon will be upgraded to 4.3. The tablet is IP55/IP58 certified which means the gadget resists water and dust.

Looking at the specs, it's apparant that Sony wants this tablet to rival Samsung's Note series of tablets. There's no stylus included in the tablet - but you will be able to write on the screen using any pencil, pen or any other stylus with a tip wider than 1mm in diameter.

In India, Sony's tied up with Vodafone to offer 8GB of free 3G data per month for 2 months time. We've a short video that shows the Xperia Z Ultra tablet in action.


​
​
Our Opinion: We've mixed feelings about this tablet. For a 6.4" form factor; we think the device is on the higher side of most people's budget. The features that make this tablet have a 'pull' factor is a full HD display and a great processor. Apart from that, we couldn't find anything that'd make us spend our hard earned money on it. Water resistant features are cool to have; but are certainly not on our 'top features' list. ​
​
What about you?​
​
Recommended Reading: https://www.crazyengineers.com/threa...uled-for-july-end-tech-specs-at-glance.69353/​
@Abhishek Rawal • 30 Jul, 2013 Looks beautiful.
But I won't spend 47K for just an Android.I will prefer donating for crowdfunding for Ubuntu-Edge & buy a gadget at same price with Ubuntu Touch OS + Android + Ubuntu desktop when docked. Hands down!
https://www.crazyengineers.com/threads/ubuntu-edge-where-two-worlds-meet.69380/
@Jeffrey Arulraj • 30 Jul, 2013 Well so much and Sony unbeaten streak in the audio segment makes it a fare game

But the price tag for a mobile with almost same features in the eyes of a commoner This gadget will please only the gadget freaks and people who worship Sony others will walk this gadget out
@Ankita Katdare • 31 Jul, 2013 So it is launching tomorrow. Pretty neat. People are discussing this phone over coffee in the office.
We've seen the Samsung Galaxy Mega 6.3 and the Huawei Ascend Mate featuring 6-inch+ displays, but isn't this the sleekest out of them all?
Plus, I love the screen. It is compatible with any pencil and selected stylus or pen with tip diameter over 1mm. That's really cool.
If price isn't a concern, this one deserves some exclusive attention.
6k views

As suggested by fella CEan and technocrat CEan - @Abhishek Rawal I am starting this debate topic. Which Indian mobile company produces the best mobile, and are they comparable to...
23.6k views
Read More →
Archives

I might be late to the party, but just stumbled upon the following wired broadband (FTTH, I guess) plans being offered by Tata Docomo folks. Compared to what we pay...
3.9k views
Read More →
Archives

I am looking for list of reputed colleges in India that provides Embedded Systems Course in M.Tech on basis of GATE Score. I recently checked Nirma University & it's ES...
14.7k views
Read More →
Archives