@Ankita Katdare • 17 Oct, 2013
Sony India has launched its Xperia C smartphone or better called phablet in India at a price of Rs. 21,490. Unveiled globally in June this year at Mobile Asia Expo, the Sony Xperia C features a 5-inch TFT display with 960 x 540 pixel resolution and has the Omnibalance design that Sony uses in its top-end models. Featuring Dual SIM support and running the Android 4.2 Jelly Bean operating system, the Xperia C is a valid alternative to the similarly priced smartphone from rival company Samsung - the Samsung Galaxy Grand. In India, Sony Xperia C might also face a stiff competition from Micromax Canvas 4, Intex Aqua i7, Gionee Elife E6 a and LG Optimux Pro Lite.

The Sony Xperia C features 4 GB internal storage and a microSD card support up to 32GB, 1GB RAM and runs on a 1.2GHz quad-core Mediatek processor. Sporting a 8 megapixel camera with Sony's Exmor R sensor on the rear, the Xperia C lets users take a self-portrait by enabling the smart voice guide to use voice commands that helps frame the shot. There's also a 'Beauty Mode' which offers users a way of softening skin tones to ensure that harsh lighting conditions or blemishes don't ruin the picture. The front camera on the unit is a VGA one. 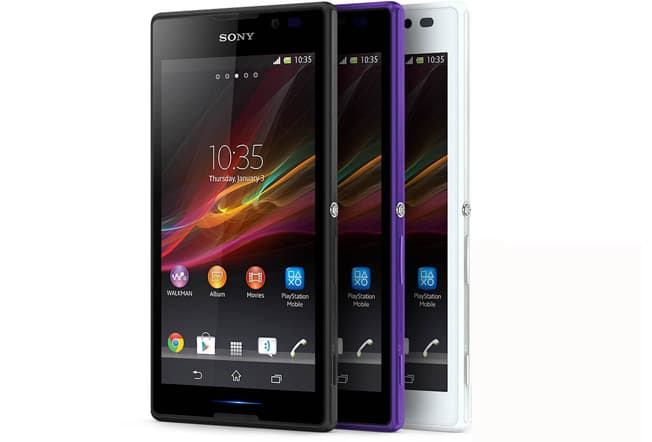 ​
Deriving its power from 2,390mAh battery that the company claims can survive through 14 hours of talk time and 588 hours on standby mode, the Sony Xperia C offers connectivity using 2G, 3G, Wi-Fi, Bluetooth 4.0 and microUSB 2.0. Available in three color variants - white, black and purple, the smartphone has a symmetrical look with a curved back panel and features colour-changing illuminations to visually alert users to incoming calls, texts messages and alarms. Sony is also offering headphones worth Rs 1,490 with the Xperia C for free.

With an offer of six months of accidental damage protection with the handset, the Sony Xperia C brings with it an Airtel offer of 1GB free data usage for two months. That pretty much sums up the complete all-you-want-to-know about the Sony Xperia C. Take a look at the following promotional video to see the phone or phablet in action. -


​
@Saandeep Sreerambatla • 17 Oct, 2013 Sony phones have best in market camera and the best(est) audio system installed on it.
But as far as I know the reliability of the hardware was always an issue with sony phones.
Battery backup is one more , the look of the phone is so old fashioned , if you look at the latest phones and tablets they look awesome too 😀
@Ankita Katdare • 18 Oct, 2013 Just checked some of the additional features in the Xperia C are - motion-gaming, FM radio with RDS, Walkman app and 'screen mirroring'.
@Sarathkumar Chandrasekaran • 19 Oct, 2013 Exmor sensor make it a good competitor for others listed but a front camera with VGA is quite disgusting feature which moves dine from the ladder.
@Ankita Katdare • 21 Oct, 2013 This has been again the most searched phone this week on CrazyEngineers. A lot of people seem to be opting for Sony and HTC instead of Samsung. Is it kind of reverse psychology? As most of their friends have Samsung Androids, it is no more cool to have Samsung? Have you seen this trend among your friends?
11.6k views

Unable get image for signature as per GATE-2015 specification.

Hi, I have gone through the required documents on link https://gate.iitk.ac.in/GATE2015/#sup_docs And follow steps as mentioned in that for getting digital signature. But after cropping the box (which is 2...
4.8k views
Read More →
Archives

Those of you who've driven the diesel and petrol vehicles will know that the diesel engines vibrate a lot. In fact, it's a problem that's not been solved even in...
11.2k views
Read More →
Archives

HTML: How to move images?

After getting his MBA in Finance & Marketing from RVIM Bangalore, Giridhar Soundarajan went on to work at various companies including ISGN, AOL and Hewlett-Packard (HP) for more than 7...
5.6k views
Read More →
Archives