Ankita Katdare · Nov 26, 2013
Rank A1 - PRO
Sony India has brought to the Indian shores its three new cameras with the launch of Sony Cyber-Shot RX-10, Sony Alpha 7 and Alpha 7R. Among these cameras, the Sony Cyber-Shot RX-10 has is one of the new advanced point and shoot one that will come to the market in India by December end this year at a price of Rs. 84,990. It features a 20.2 effective megapixel (approximate) 1.0-type back-illuminated Exmor R CMOS sensor, which is found on the DSC-RX100 II, and according to Sony is around four times bigger than a standard compact camera's sensor. On the specifications list of the RX-10, you will find a BIONZ X processing engine, a fixed Carl Zeiss Vario-Sonnar T* 24-200mm (35mm equivalent) F2.8 lens and Optical SteadyShot (image stabilization).

Thanks to the 3-inch 'bright 3.0-type White Magic' LCD, with 1290k dots, we get amazing shots while taking pictures. The Sony RX-10 camera is of course also capable of full-HD 1080 pixel video recording, at a selectable 50p (AVCHD progressive) or cinematic 25p frame rates, with full control over P/A/S/M exposure modes. Also on the RX-10 features is a built-in audio level meter and adjustable levels. On the body, we find a microphone jack and headphone output for accurate level monitoring. Sony has also launched the XLR-K1M adapter kit, thus allowing in addition of an external microphone via the balanced XLR terminal. With support for Wi-Fi and NFC connectivity, the Sony RX-10 is compatible with Android and iOS devices, using the PlayMemories Mobile Version 3.0. 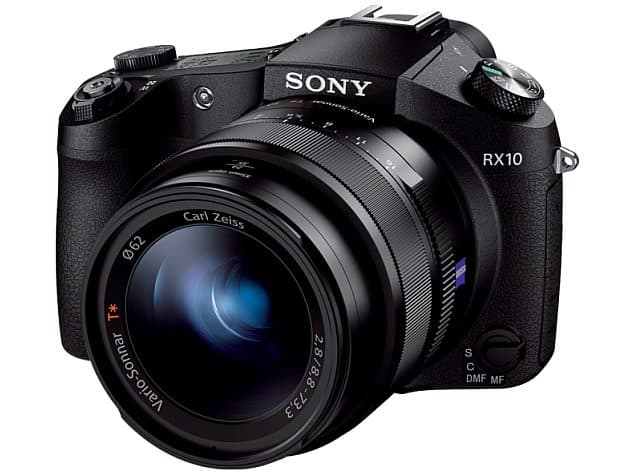 ​
Coming to the Sony Alpha 7 camera features, we have a lightweight body that weighs just 416 gram and brings in great resolution at 24.3 megapixels and makes room for 14-bit RAW recording. The Alpha 7 features compatibility with Sony E-mount and full frame lenses and along with that Fast Hybrid AF with phase-detection that offers DSLR-like speed and fast intelligent AF optimized for full-frame sensor, direct access interface for fast, natural shooting and connects to smartphones via Wi-Fi or NFC.

And the last but not the least on today's list if the Sony Alpha 7R camera that features 35mm full frame sensor and brings with it support for 36.4 megapixel 14-bit RAW recording. This camera has got its name in the wall of fame for being the "world's lightest interchangeable lens full-frame camera" thanks to its 406 gram weight. Just like the Alpha 7, this one also has a fast AF optimized for full-frame sensor and supports connectivity through Wi-Fi as well as NFC.


​
Both these camera feature Exmor CMOS sensor that brings in 'light concentration and photo diode expansion technologies', while the Alpha 7R also features a new 'gapless' on-chip lens design that eliminates gaps between adjacent pixels. Sony says this allows for increased light collection efficiency.
Coming to the pricing and availability details - The Alpha 7R will be available in India for Rs 1,24,990 while the Alpha 7 for Rs 94,990 by December end along with the Sony Cyber Shot RX-10. It seems that the photography buffs in India do have a lot of winter shopping to do next month. Posted in: #Hacking and Security
1 Like
@ A2A Reply