@Abhishek Rawal • 03 Oct, 2013 • 2 likes
'Smart launcher' is very attractive launcher for Android phones which will give you Ubuntu touch's Unity experience. Smart launcher is consuming very low amount of resources (around 7-8 MB for me) & delivers pretty good performance without any lag unlike other launchers. I still haven't found any such bug which can annoy anyone & make them stop using this awesome launcher.

User Interface :
The left side of the panel contains 'categories' mainly : Settings, Utility, Media, Games, Internet & Communications. The applications of the specific category resides in that specific section. However, you cannot add extra 'custom' section, if you want, that's bad IMO. Though you can move applications from one section to another just by simple push,drag & drop. (Check Images Below) 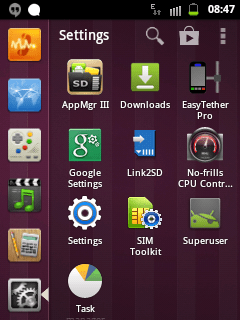 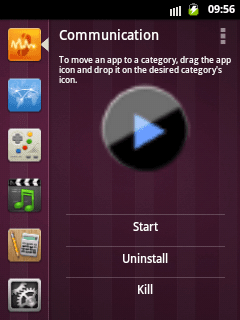 Themes :
There are varieties of Themes available for the launcher which you can install from playstore or within the launcher under 'preference' option which will link you to the Google play store. The installed themes can be used within the application & UI will be changes as per theme base. 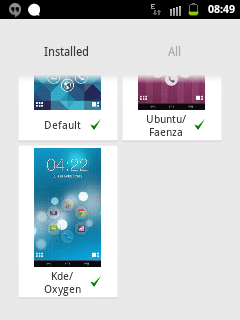 Additional Functions :
- Change the icon set : You can download packages from Google Play store & change the icon set as per your taste.
- Kill : You can kill the application within the launcher just by long pressing on application & hitting on 'Kill' button.
- Uninstall : Same as kill option, you can do same with Uninstall feature.
- Hide icon : No need to install extra app to hide your erotic applications, Smart launcher has this feature inbuilt.
- Main screen : You can add shortcuts to the application on the main screen of launcher either in circular look or aligned look.
- Change text color of clock & other text in entire UI. (Requires paid version)
- Add widgets on the main-screen of launcher (Requires paid version) 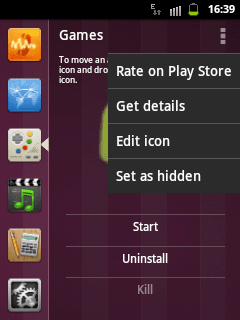 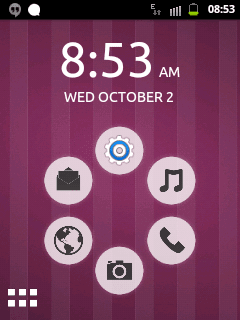 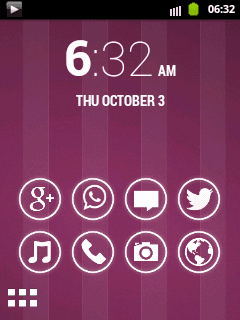 Cons :
- Even in main home screen, you can drop the status greper. I didn't liked it.
- Even in paid version of launcher, very less text color changing option is available.
- No custom category option.

Overall : Very nice launcher, not a single bug that will go noticed, Low on resources, tonnes of themes & icon sets.
Must try. (Search for 'Smart Launcher' in Google playstore & try it)
@Ankita Katdare • 04 Oct, 2013 Amazing review man! 😀 Looks like a simple, easy-to-use, no-nonsense launcher to me.
The way it organizes the whole menu into their type is seamless. It is almost like it isn't an Android any more.
Improved widgets compatibility for eye in sky, google play, dashclock is worthwhile.

So this is a launcher which can be installed and all the icons and screens gets changed. Is this compatible with all versions of android ?

And I have one more dumb questions, it is stated that it uses very less resources, so actually what is the benefit we will get on using it? my understanding is it will be a add-on anyway?

@Saandeep Sreerambatla Once you install this app, click on home button & select "Smart launcher". you'll get the user interface as shown in attached image in post.
There are plenty themes available for downloads which you can download & it will some of the icons depending upon the theme you're currently using.
Here 'some' refers to the icons which are on left panel & not installed applications.

To change icon image of installed applications, you've to download icon packages which can be easily available from Google Playstore.

Low resources means, it will consume less amount of RAM memory & thus it will not lag the Android.
@durga ch • 04 Oct, 2013 is it only the UI right? I did install the smart launcher and UI looks interesting,
@Abhishek Rawal • 04 Oct, 2013

durga
is it only the UI right? I did install the smart launcher and UI looks interesting,

Yup. It's mere an UI, but beautiful one 😀

durga
That sounds interesting, wont other phones support ubuntu unity? I mean not vene the rooted ones???

Canonical will release stable build which will support Google Nexus 7, Google Nexus 4 & Galaxy nexus 4 out-of-box. All you've to do is connect nexus device with usb to Ubuntu desktop OS & follow the steps shown in official website & Ubuntu Touch will be installed. It's quite easy.

For other devices, it does support, but it is ported build by non-ubuntu developers, hence not stable. Some functions might not work at all. But for Nexus device, everything will work & can use Ubuntu touch as primary phone OS now. @Pensu might be missing his Google Nexus 4.
@Kaustubh Katdare • 04 Oct, 2013 I've tried a few launchers on my Galaxy phone out of curiosity. The ones I tried ended up crashing after a few hours of use and some slowed down the phone like anything. I'm now happy with what Samsung provides out of the box.
@Abhishek Rawal • 08 Oct, 2013

Kaustubh Katdare
I've tried a few launchers on my Galaxy phone out of curiosity. The ones I tried ended up crashing after a few hours of use and some slowed down the phone like anything. I'm now happy with what Samsung provides out of the box.

I was wondering if there's any way or hack to access whatsapp online via desktop or laptop. I've been told that one of the way is to install an Android...
110.1k views
Read More →
Archives

After being a part of lots of rumors and a series of leaks, Nokia Inc. has finally launched its much talked about smartphone - the Nokia Lumia 525. A successor...
4k views
Read More →
Archives

Gaurav Dahake submitted a new project: BuyHatke Browser Add On For Google Chrome & Mozilla Firefox - A revolutionary hack for getting the best price always I am an engineer...
4.6k views
Read More →
Archives

Best college for post graduation in Civil Engineering in India and Abroad?

Which is the best college for doing post graduation in India and also over the world?
3.4k views
Read More →
Archives

Best Engineering Branch Based On Placements and Salary