@Ankita Katdare • 22 Oct, 2014 • 3 likes
In the mankind's quest to create an advanced artificial life or system, the basic ingredient needed is a protocell. The biggest challenge faced in creating an artificial protocell is to create the information strings that can be inherited by cell offspring and are needed to control the cell metabolism and equip the cell with information on how to divide, much like the modern DNA. A team of researchers from Department of Physics, Chemistry & Pharmacy and Steen Rasmussen & his team from FLINT (or the Center for Fundamental Living Technology) at the University of Southern Denmark have successfully developed a virtual computer experiment to discover information strings with peculiar properties.

In their experiments, the research team came across two problems - It is difficult to maintain a population of long strings because they are decomposed into shorter strings in water. Moreover, without the use of modern enzymes, it is also very difficult to make the molecules replicate At their virtual molecular laboratory, information strings replicated quickly in their computer simulation. However, the system also developed an equal number of short and long information strings. In fact, they found that a strong pattern selection on the strings had occurred. and the only explanation for such a coordinated selection of strings could be found in the way the strings interacted with each other. 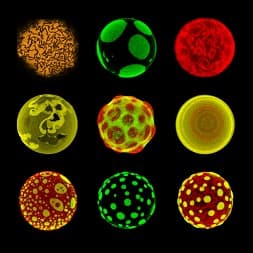 ​
The research team developed a self-organizing autocatalytic network, in which they added all the materials necessary for creating information strings. The chemical reaction in such a network results in the formation of each molecule. Furthermore, this reaction is catalyzed by at least one other molecule to create a network of sorts. Such an autocatalytic network is nothing but a demonstration of a primitive form of metabolism. Among the unusual findings, the research team reports that the strings of all lengths existed in equal concentrations and the selected strings had ming-bogglingly similar patterns.

Prof. Steen Rasmussen has reasons to believe that they might have been able to move close to a process that initially began the first life, the first protocell. That said, we can't help but imagine the infinite & amazing possibilities that this research work presents before us. We could have self-repairing technological devices that develop new properties over time.

What are your thoughts on the new research work from the University of South Denmark team? Share with us in comments below.