@Ankita Katdare • 14 Jan, 2015 • 1 like
If you have been waiting around for a phone that has the most impressive specs in the bunch, here's a phone worth mentioning from CES 2015. Called Saygus V², the brand new Android 4.4.4 (KitKat) OS running smartphone has really come out to be a winner in the specs department as far as the hardware is concerned. Featuring a 5-inch Full HD display with 1920 x 1080 pixel resolution (445 ppi) sunlight viewable, edge-to-edge borderless screen, the Saygus V2 brings front and back light sensors and Corning Gorilla Glass 4 for the extra protection. The V2 is housed in a hardened Kevlar protective edge with aluminum sides, a strong lightweight magnesium mid-frame and a resilient soft-touch back coating in a tough fiberglass body of less than 10mm in width. At 9.7 mm the phone may be a bit thicker than its peers, but isn't at all heavy at 141 g.

Before we move on to the real rocking features on the Saygus V2, here's a little background on the company behind it. Based in Salt Lake City, Saygus is the currently the only smartphone start-up to ever receive certification from a US Carrier. It is not only the winner of a 2015 CES Innovation Award in the Wireless Handset category, but its product's very first version is being widely recognized as the world’s number one smartphone. That's really something for any company venturing headfirst into this over-crowded domain monopolized across the globe by the big players. 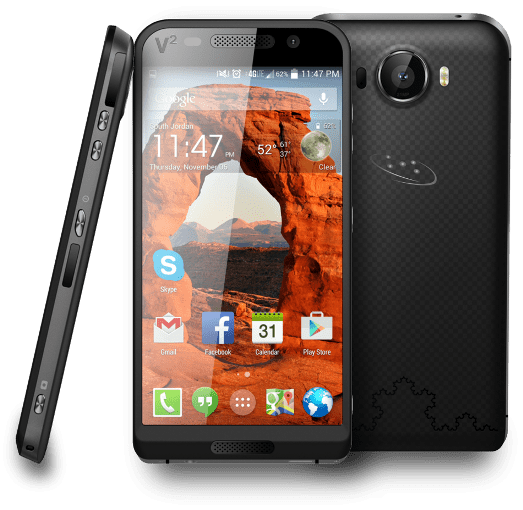 ​
Specifications to kill for -
Coming back to the specifications on the Saygus V2 smartphone that have quickly garnered the attention of the entire tech community for its, what CNET calls, superhero specs. Powered by a 2.5Ghz Quad Core Qualcomm Snapdragon processor, the Saygus V² smartphone packs inside it 3GB RAM and 64GB onboard flash storage. Support Dual MicroSDXC Slots, the phone makes room for expandable storage up to 256GB. On the rear end of the phone, we find a whooping 21 megapixel rear camera (with auto focus and dual LED flash), whereas on the front there's a 13 megapixel snapper. Both camera features optical image stabilization and a hardware camera shutter button acts as a cherry on the cake.

Features that stand out -
1. Saygus V2 features HD WiFi or 60 GHz WiFi, an impressive addition that can let users project their phone's screen to a TV monitor with a USB or HDMI port using an HD WiFi dongle from up to 40 feet away.
2. The V² is sold with root access available & multi-root capability (meaning custom firmware can be installed and the phone can run software from a MicroSD card or the internal flash)
3. Users and other companies are fully authorized to change out the user interface (UI) or customize software in the V² as they choose.

With that we come back to the end of the specifications sheet for the all new Saygus V2 smartphone that has left us all baffled. The product is scheduled to begin shipping in early 2015 and the company has already started taking pre-orders. What are your thoughts on the latest Android phone in the market? Share with us in comments below.

Divyaprakash
Indeed a 'spec' lover's dream. Wish this phone could be available to other operating systems as well. Firefox, Ubuntu or God! Sailfish...

😁 True. I was waiting for this comment. This phone simply can't escape any gadget lover's attention.
Here' a pain point though - Even though the phone is being promised for a price that is 20% lesser than the other top flagships, the CES 2015 Saygus booth hinted at a price of $700 - which on the current rates converts to Rs. 43,000+
Does that mean Saygus is not trying to be the NEXT One Plus? What are your thoughts?
@Divyaprakash KC • 15 Jan, 2015 • 1 like

Ankita Katdare
😁 True. I was waiting for this comment.

Ankita Katdare
Here' a pain point though - Even though the phone is being promised for a price that is 20% lesser than the other top flagships, the CES 2015 Saygus booth hinted at a price of $700 - which on the current rates converts to Rs. 43,000+
Does that mean Saygus is not trying to be the NEXT One Plus? What are your thoughts?

What I have seen is , usually Indian prices would be 2K - 3.5K more than USD - INR conversion rate. Yet, Saygus seems to have the right markings of success and makes the appropriate noises. I guess if the camera ( Shutter key and OIS? WOW!) performance is anywhere close to similarly 'speced' Nokias in terms of picture quality , then there could be a lot of takers. If you look at One Plus One, one of the weaker aspects of the phone is camera , according to reviews. So is the case with impressive Moto X. So I safely assume it all boils down to how good Saygus can make the optimal camera experience.

Perhaps root access is a blessing to phone geeks, however a lot of regular users just don't look at that area. So if Saygus can optimize whatever OS to provide smoother, energy efficient smartphone experience, it is going to be a hit. Oh, not to forget support network as well - especially in countries like India where we don't have anything like career contracts.

In short, It is not going to be easy to be a flagship killer. But the potential is there.