Sharvari Panchbhai · Feb 27, 2015
Rank C2 - EXPERT
The South Korean multinational company, Samsung is known for launching wide range of smartphones, TVs, tablets, et al. It is also one of the largest producers of memory chips in the world. Now, the firm has announced that it has begun the mass production of its first 128 GB flash memory chips for smartphones for better user experience while multitasking. The Universal Flash Storage (UFS) is viewed to be the next-generation NAND flash product and its UFS 2.0 interface is advanced JEDEC-compliant. This super-fast UFS embedded memory comes in 128 GB, 64 GB and 32 GB variants. 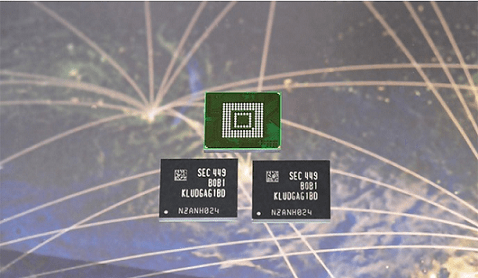 ​
Samsung has used a technology called ‘Command Queue’ that is applied to solid-state drives (SSD) for significantly increasing the speed of processing input and output data. Due to this application, the reading speed becomes 2.7 times faster than the average eMMC 5.0 and 28 times faster than external memory cards. The UFS performs 19,000 input/output operations per second (IOPS) for random reading and consumes 50 percent less energy when compared to eMMC 5.0. Moreover, the random writing of data to storage is carried out at 14,000 IOPS. Like ePoP (embedded package on package) memory, UFS can also stack atop processors for making ultra slim smartphones. ePoP memory uses 40 percent less space by combining RAM and storage and was introduced by the company earlier this year.

The firm is still manufacturing eMMCs and at present has begun the mass production of eMMC 5.1. It anticipates that in future UFS will be used in high-end mobile devices and eMMC will support mid-range market. According to ZDNet, Samsung Galaxy S6 smartphones are likely to come with UFS and also with ePoP.