Amit Jha · Jan 23, 2017
Rank C2 - EXPERT
The mystery behind the explosive Samsung's Galaxy Note 7 devices has finally been unveiled. The company has announced that faults in the battery were the reason behind the Note 7 disaster and from now on they will be implementing an 8 point battery safety check to ensure the reliability of the upcoming devices. Samsung, at a press conference confirmed it and also updated the information on their official website. More than 2.5 million Note 7 devices were recalled after they started to overheat and explode while charging. The 8-point battery safety check feature is expected to tackle such issues and ensure nothing like that happens with the upcoming Galaxy devices, especially the S8.

Not only profit, but Samsung has also lost its brand value in recent times. Note 7 has contributed a major part in that. After the incident, the engineers at Samsung, have re-designed the manufacturing process to tackle the shortcomings and from now on the batteries will be thoroughly tested and checked to ensure the safety of the user. This checking process has been coined as the 8 point safety check and include the following sequential steps – 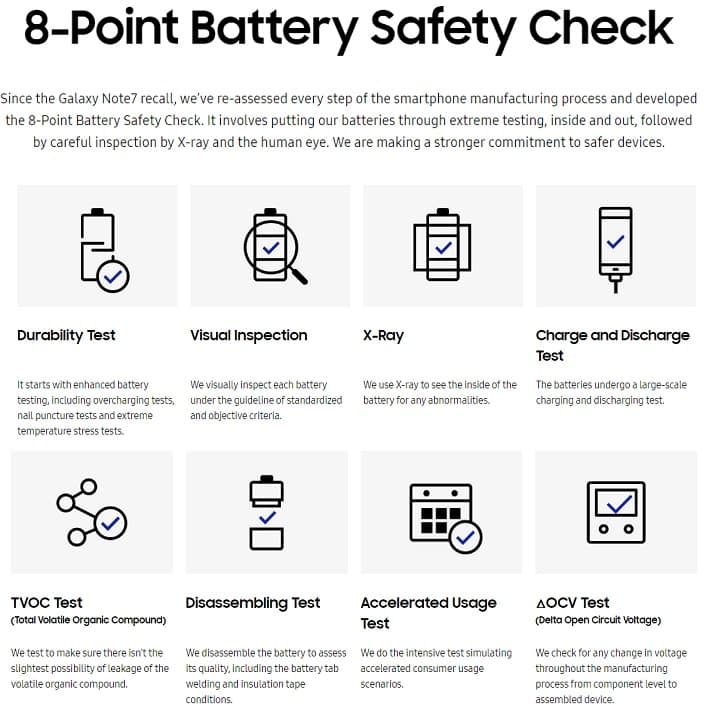 ​
Hence, it is clear that the company has taken major steps to avoid manufacturing failures after the Note 7 recall. Though, such steps will cause delay in the launch of several upcoming devices, the future releases will be devoid of battery defects. The newest device in-line is the Samsung Galaxy S8 and only the time will be able to tell whether it will end up following the same fate as that of S7.