Samsung Galaxy S Tab 8.4 features an 8.4" super AMOLED screen with a resolution of 2560x1600 at nearly 359 ppi pixel density. The OS used is the latest Android 4.4.2 KitKat. As mentioned earlier, the tablet will be offered in two variants: Wi-Fi and LTE. The tablets measure 125.6 x 212.8 x 6.6 mm and weigh 294 gm for Wi-Fi version and 298 gm for the LTE version. This makes both versions of the tablet lighter and thinner than an iPad Mini by about a centimeter. Each model of Galaxy S Tab 8.4 will be available in either 16/32 GB versions with a 3 GB RAM and MicroSD card slot expandable upto 128 GB. Exynos 5 Octa 5420 is the chipset used with two CPUs: a quad-core 1.3 GHz Cortex-A7 and a quad-core 1.9 GHz Cortex-A15. The graphics accelerator is an ARM-based Mali-T628 MP6 GPU. The Tab 8.4 has a battery capacity of 4900 mAh. The rear and front cameras are 8 MP and 2.1 MP respectively. LED flash is provided with the rear camera. 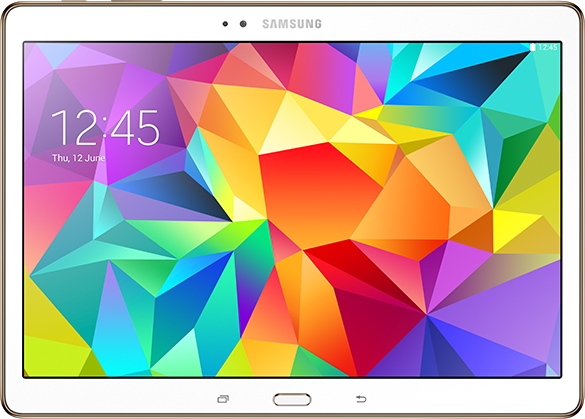 ​
The LTE and W-Fi versions of Galaxy S Tab 10.5 have similar features as their 8.4 counterparts except the screen size (obviously), dimensions, weight and battery capacity. The 10.5" screen size tablet has the dimensions of 247.3 x 177.3 x 6.6 mm and the LTE and Wi-Fi versions weigh 467 gm and 465 gm respectively, again thinner and lighter than an iPad Air. The battery capacity of this version is 7900 mAh. Again, the Galaxy S Tab 10.5 will be available in 16 GB or 32 GB versions. 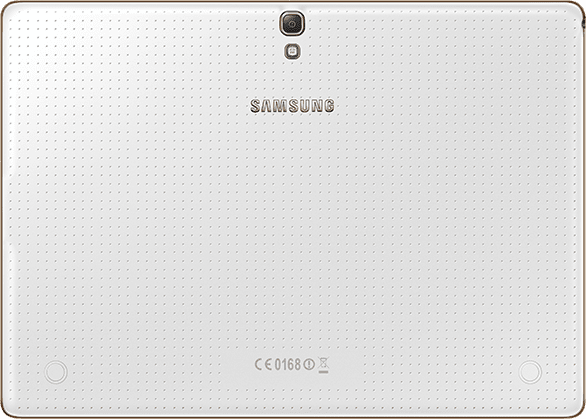 Samsung claims that the Super AMOLED displays have an impressive color reproduction rate of 90% as compared to 70 % of that of conventional LCD tablets. Also, the 4 million AMOLED pixels offer a contrast ratio of 100,000:1, which Samsung says is about 100 times greater than than conventional LCD displays.

​
Samsung has also included a number of fancy features and apps. A few noteworthy are: Multi window: complete multiple tasks on one screen (only on LTE); SideSync 3.0: view phone screen on the tablet, transfer data, copy & paste text easily, can even send and receive voice calls from Tab S ( However, this brilliant app works only with Samsung's high-end smartphones such as GALAXY Note 3, S4 and S5); Samsung KNOX: used to keep data safe; Remote PC: Control your PC through your tablet and so on.

Apart from that, Samsung is offering a limited-time premium subscription to many apps for free. These include Bloomberg+, WSJ, NY Times for news; GQ, Kindle, Conde Nast, Vogue, The Economist for books and magazines; a number apps for entertainment such as Marvel Comics, Asphalt 8, Cut the rope 2, Fruit Ninja, Livesport, etc. and also a number of apps for productivity such as Hancom Office, Cisco Webex, Linkedin, Pocket, Evernote, EasilyDo Pro, Bitcasa, etc.

In short, Samsung has left no stone unturned for promotion of this Galaxy S Tab and to say that this tablet is above-average would certainly be an understatement. This product certainly demonstrates Android as a worthy competitor in the premium tablet range and will definitely give iPads a run for their money.

Source: Samsung
@Rajni Jain • 02 Jul, 2014 • 1 like The first impression I got after reading the article was WOW !!!
There are not many in the industry who give complex to Apple and its product in their own territory.

Samsung has attempted that, with a super specifications, Samsung is bringing amazing battery, killer looks, sharpest design and under check price. Can't ask more from them.
@Ankita Katdare • 02 Jul, 2014 I am pretty sure the display on this tablet will make eyes pop (in a good sense 😁)
Can't wait to get my hands on this device.

Change in entropy in a polytropic process

TATA is desperate to push up the sales, so much so that it's bringing into play its many smart ideas which the company believes shall extract results. Selling TATA Nano...
3.2k views
Read More →
Archives

can anyone tell me that which website i can download mechanical engineering books in pdf format.........
3.5k views
Read More →
Archives

Advantages of linked lists over arrays?

I wish to discuss the advantages of link-list over array? I've been referring to the basic C-programming books, but haven't been able to make anything out of it.
14.3k views
Read More →
Archives

I know the basic difference, I want to know where, when & under which condition partial differentiation is used 7 under which condition differentiation is used ? What is the...
3.1k views
Read More →
Channels
👨‍💻 Remote Jobs 🗞️ News 🚀 Founders Circuit 🗄️ Archives ✨ Newsletter 🕹️ Changelog
About · Privacy · Terms of Service · Contact Us · © 2005 - 2022 CrazyEngineers. All rights reserved.