@Ankita Katdare • 17 Oct, 2013 • 1 like
Samsung Group India has launched two new Android smartphones in the market with Samsung Galaxy Star Pro and Samsung Galaxy Trend. Bringing forth these new mid-segment smartphones, Samsung India has brought new additions to its Galaxy series. As we check out the specifications chart of both these smartphones, we find that the Samsung Galaxy Star Pro features a 4-inch WVGA touchscreen and is powered by a 1 GHz single-core processor. It has 512MB RAM along with 4 GB internal storage which can be expanded with a 32GB microSD card. There's a 2 megapixel camera and has support for Dual SIM. 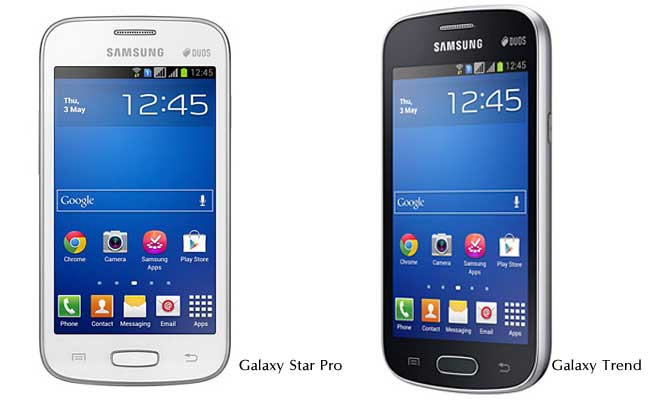 ​
Coming to the Samsung Galaxy Trend features - we get a 4.0-inch WVGA display with 480 x 800 pixels resolution. Powered by a 1GHz Single Core processor coupled with 512MB RAM, the Galaxy Trend offers 4GB internal memory that is expandable via microSD card to 32 GB. It is equipped with a 3 megapixel rear camera. Both of these devices come pre-loaded with nine Indian languages, including Hindi, Bengali, Punjabi, Marathi, Gujarati, Kannada, Malayalam, Telugu and Tamil. "Not only can consumers browse the web, send SMS, and enjoy the phone interface in any of the 9 languages, but also use exciting applications in any of these languages," the company said in a statement.

The Korean company, which has a 26 per cent share in the country's smartphone market is offering options in local languages in a bid to attract non-English speaking customers. It is interesting to note that Samsung now has about 14 devices under Rs. 10,000. There's a wide range of smartphone options to choose from if you are planning to buy a new Android for yourself. Choose wisely, get the best.
@Abhishek Rawal • 17 Oct, 2013 • 2 likes Seems like perfect device for upcoming Android KitKat 4.4 update. It does fulfills all the required criteria. But Samsung ain't Google, so it all depends on Samsung whether they're adding update for low-end device for Kitkat or not.

It doesn't hurt waiting for couple more months & see which of Samsung low-end/entry-level devices are getting Kitkat 4.4 update. So, select the one which gets 4.4 😀
@Ankita Katdare • 20 Oct, 2013 It is beautiful to see that the Samsung Galaxy Star Pro and Trend have been the highest searched phones this week. It goes to say a lot about the mid-budget phone's priority in India.
I urge all CEans and VoiCE readers to share your thoughts with us on these phones through replies.
10.8k views

Difference between LIN, FlexRay,CAN and TTCAN

Yes I'm applying for IES 2015. I am a mechanical engineering graduate and 2014 passout. I got confused when seeing UPSC exam schedule. There is ISS/IES exam and it's notification...
4k views
Read More →
Archives

The AADHAR or UIDAI (aka Unique Identification Authority Of India) API (aka Application Programming Interface) has been released for software engineers free of cost. For the uninitiated, UIDAI is India's...
5.7k views
Read More →
Archives

How To Answer "Why Should We Hire You?" Interview Question?

Imagine you're being interviewed for a position at CrazyEngineers. It doesn't matter what discipline you belong to and what role you're being chosen for, so pick up any of your...
11.7k views
Read More →
Archives

Difference between rocket and missile?

What exactly is the difference between a rocket and a missile? Are they different or same?
8.4k views
Read More →
Channels
👨‍💻 Remote Jobs 🗞️ News 🚀 Founders Circuit 🗄️ Archives ✨ Newsletter 🕹️ Changelog
About · Privacy · Terms of Service · Contact Us · © 2005 - 2022 CrazyEngineers. All rights reserved.