@Ankita Katdare • 28 May, 2013
Samsung India has added a new gadget to its range of Galaxy smartphones with Samsung Galaxy Mega 6.3. Those of you who would think bigger is better and aren't satisfied with the size of the Galaxy Note 2 might want to give this elongated-looking phone a shot. Featuring 6.3-inch HD TFT display with 720 x 1280 pixels resolution and approx 233 ppi pixel density, the screen on this mega phone supports the TouchWiz UI. Powered by a 1.7GHz Qualcomm Snapdragon Dual Core processor and running atop the Android 4.2 Jelly Bean OS, this Mega 6.3 has features that won't really beat others in the galaxy series from Samsung.

This phone looks and feels huge because its dimensions are 167.6 x 88 x 8.0 mm and it weighs 199 g. There's a 8 megapixel rear-facing camera that will capture shots at 3264 x 2448 pixels with autofocus, LED flash and there's an odd 1.9 megapixel front-facing one. Options for photo-capturing include - geo-tagging, touch focus, face and smile detection. For connectivity, there is support for Wi-Fi a/b/g/n/ac, WiFi Direct, Bluetooth 4.0(BLE). There's USB 2.0 port and GPS+GLONASS, NFC and MHL are supported too. The phone has a Accelerometer and sensors for RGB light, Geomagnetic, Proximity and a Gyroscope. 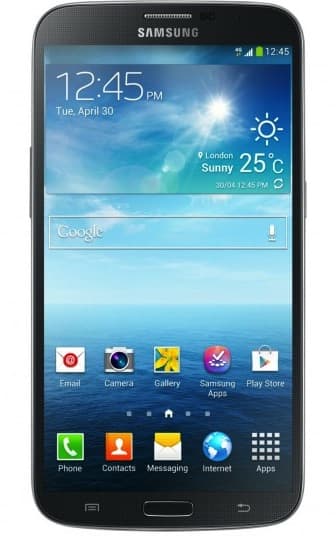 Booting up on power driven from a Li-ion 3,200 mAh battery, the Samsung Galaxy Mega 6.3 carries a 8/16 GB Internal Memory + 1.5 GB RAM and sports a microSD card slot that lets you expand it up to 64 GB. Available in two colors - White & Black, the general android features like Image/video editor, Document viewer, Google Search, Maps, Gmail, YouTube, Calendar, Google Talk, Picasa come to you right out of the box. If it matters to you, the keyboard accepts predictive text input. That's pretty much sums up the tech specs list for the Mega 6.3 phone.

Available right now at a price in India of Rs. 31,490/-, this mammoth of a phone (or should we just call it phablet again?) is going to try its best to sell in the Indian market. How do you like the new entry on the shelves? Share with us in comments.
@Kaustubh Katdare • 28 May, 2013 I can't believe Samsung's trying to map every centimeter with their growing phone sizes. Should we call this a phone, a phablet or a pure tablet? Plus, I know the 7" form factor looks weird in hands when making a phone call. I'm quite sure 6.3" model would look no different.

Not sure if the price of Rs. 31k is really justified.
@Anoop Mathew • 28 May, 2013 Some people are so adamant about size, specially the business class who like to bridge the gap between phones and tablets (telling from personal experience); for them this will look like a good-to-go. Even the Galaxy Grand is not that big (yeah, that's what one such folk told me 😨 ). But from my point of view, Samsung should specifically focus on the front camera. If you're given a phone with a damn good front focus camera for conference call enhancement, that would definitely click. And looks to me that the graphics would drain the battery. All else is typical Samsung.

Word of Advice to Samsung: Please change your designer guy. The design's too old fashioned now! When will there will be a change to the similar looking models? It's so confusing! Last time I went to buy a jelly backcase for a friend's Samsung, the shopkeeper got confused whether it was S Duos or S advance or some other variant of S (seriously, isn't there about 25 more alphabets left in English and a million numbers to choose from?) and I literally had to ask my friend what the actual model number was (you know the GT8180 sort of thingy) in order to find the exact cover. 😖
3.5k views

How To Get Selected In Infosys

Hello all, i want to interface a bluetooth module with lpc 2148. i am much familiar with c programing with lpc 2148. but dont know anything about bluetooth n AT...
3.2k views
Read More →
Archives

Are product reviews on Flipkart honest?

Well, I named Flipkart because they are synonymous with online buying in India. However, this discussion is about checking out the honesty of the reviews of products posted on Flipkart...
3.2k views
Read More →
Archives