Samsung Galaxy K Zoom - Could This Be The Best Camera Phone In 2014?

Ankita Katdare · Apr 29, 2014
Rank A1 - PRO
The South-Korean manufacturer has launched yet another Android smartphone this summer called the "Samsung Galaxy K Zoom" that wants to introduce a really powerful camera option in a phone. You can easily mistake this one to be a mid-budget smartphone in the Galaxy series, but Samsung wants you to look again, because this one has a lot to offer. Let us take a look at the phone's most catchy feature - the camera - first and later move on to the technical specs and feature highlights.

The Samsung Galaxy K Zoom features a 20.7 megapixel BSI CMOS sensor rear camera with 10x optical zoom. The camera brings in an Optical Image Stabilizer (OIS) and AF/AE Separation. Moreover, according to the company's claims the device’s Xenon Flash is better than LEDs. Users can shuffle between - SMART Mode, Expert Mode(P/M) and My Mode and click photos with object tracking, studio and Smile/ Blink detection options. There is facility for continuous shot at 3fps MAX with AF and it supports video recording & playback in Full HD 1920 x 1080 resolution at 60p. The camera on the front is a decent 2.0 megapixel. 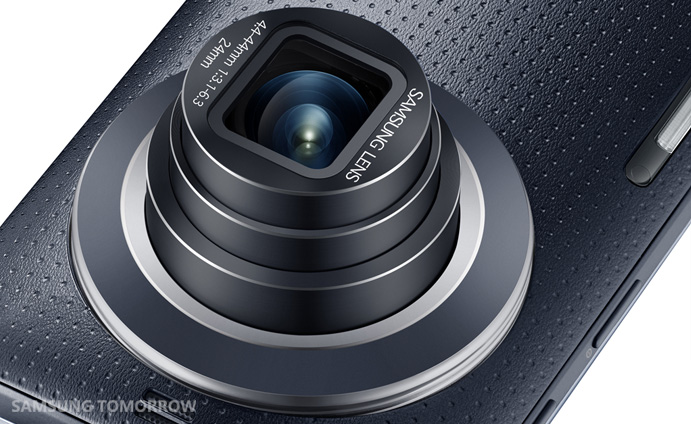 Weighing just 200g, the Samsung Galaxy K Zoom has the dimensions - 137.5 x 70.8 x 16.6. With that the phone derives its power from a 2,430 mAh battery. Among the sensors, you'll find the usuals - Accelerometer, Gyro Sensor, Proximity Sensor, Geomagnetic Sensor and Light Sensor. Additionally, the Galaxy K zoom offers the "Ultra Power Saving Mode" for minimizing the battery consumption, S Health Lite for personalized fitness and lifestyle coaching, and a Studio app to allow users to easily edit their pictures and videos 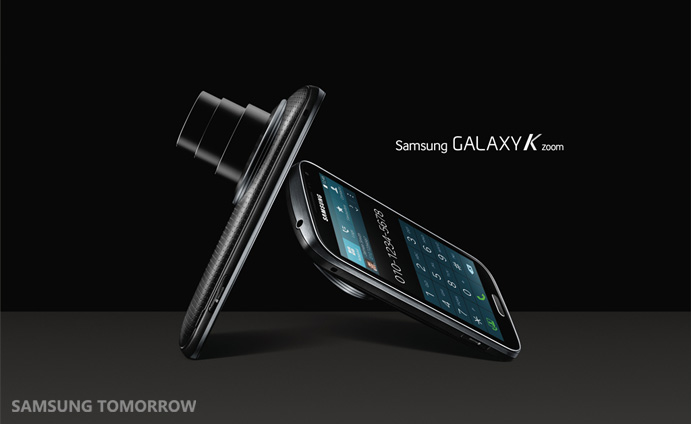 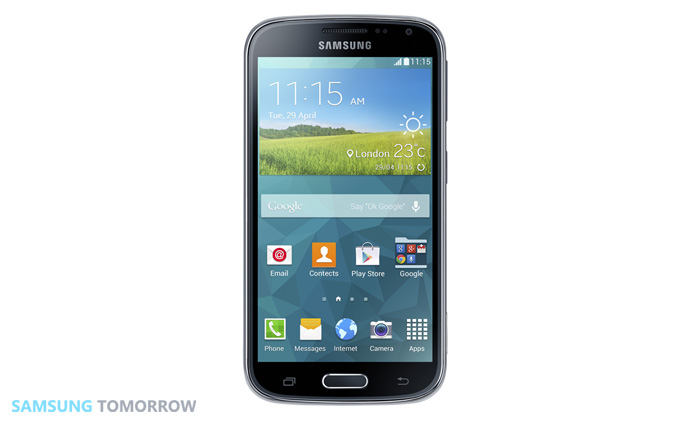 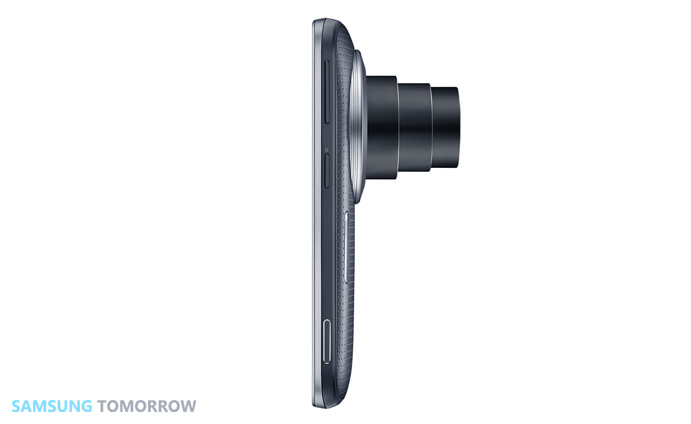 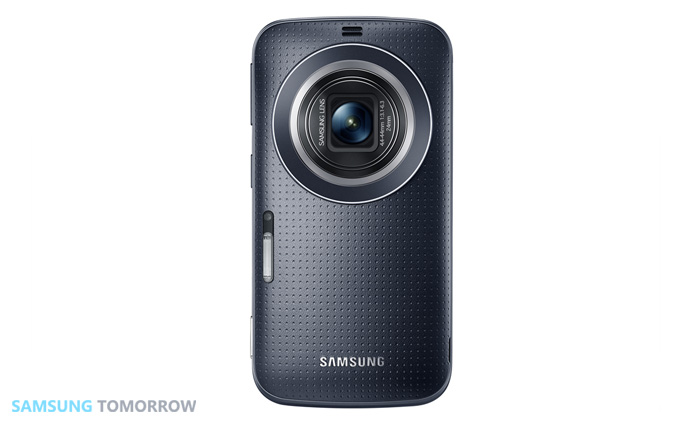 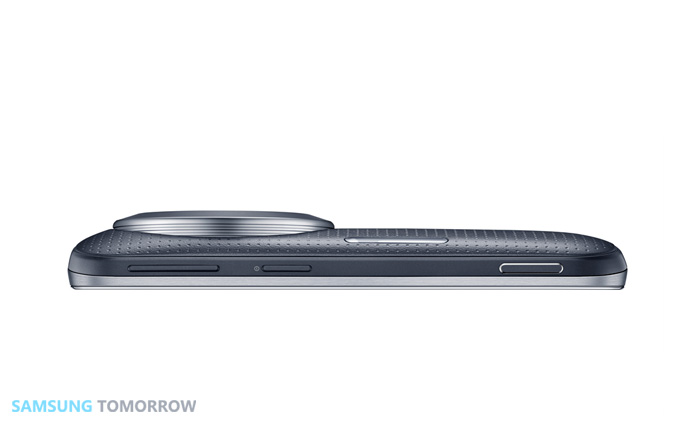 ​
With that we come to the end of the technical specifications list. The phone's camera features make it comparable to standard point-and-shoot cameras. What are your thoughts on this new Android phone in the market? Samsung still hasn't disclosed the pricing and availability details. Do you think this stands a chance to be included in the top 10 list of camera phones in 2014? Share your thoughts with us in comments below.

Kaustubh Katdare · Apr 29, 2014
Rank A1 - PRO
Well, my opinion on this is straightforward. If I am to get a camera; I'd get a DSLR; because the point-and-shoots can never beat them. The latest OnePlus One phone is more than capable of taking DSLR like photos. It indicates that great photo-quality is possible without really deforming the phone (sorry for my harsh words!) to make it work like a camera.

Anoop Kumar · Apr 29, 2014
Rank A2 - PRO
Not sure why people should get this kind of gadget, not really a phone and not really a camera and over that a fatty price.
If you have good camera but you need to share quickly you take picture from phone and share this why buy this fusion gadget.
I just saw OnePlus One, amazingly priced and with CyanogenMod this is a big plus.
1 Like

Ankita Katdare · Apr 29, 2014
Rank A1 - PRO
Looks like we will need some camera shots to witness the picture quality. The phone is getting pretty average reviews so far.
0 Likes

Rajni Jain · Apr 29, 2014
Rank B1 - LEADER
As one can't carry DSLR everywhere and every time , this type of phone is used by the person who wants to capture more and more moments every single day and value his/her photography.
Worth of this phone can only be calculated after knowing the price...😀😀
0 Likes

Satya Swaroop Dash · Apr 29, 2014
Rank A3 - PRO
When it comes to its latest smartphone Samsung has tried to combine the best elements of Sony Xperia Z2 and Nokia Lumia 1020 but it cannot never beat a DSLR. I saw on BBC a couple of months ago where the phones where pitted against a DSLR and they failed in tougher photographic conditions.
0 Likes

smorgasbord · Apr 29, 2014
Rank D2 - MASTER
would anyone like to see pictures taken by nokia 808 pureview 41MP camera?
and of course the snaps are taken by a novice. just point and shot kind of thing.
0 Likes

Yogesh Borkar · Apr 29, 2014
Rank C1 - EXPERT
Photography lovers will never settle for less than a DSLR & K zoom will never be able to satiate their desire for perfection. Moreover as of now, all samsung smartphones are fatty priced, so expecting K zoom at a lower price will be a big fault.
People will go for a DSLR at that price.
0 Likes

The Samsung Galaxy K Zoom has arrived in India at a price of Rs. 29,999 and is available exclusively on Amazon. Any takers here?
0 Likes

Karthikeyan jaisankar · Jul 3, 2014
Rank C3 - EXPERT
Camera is the Main advantage in this phone (Sam galx K zoom).Why can't they use more pixel(MP)??while not comparing with NOKIA 808 but it need some addition specification needed and front camera 2.0 is not a big modification in this phone..O😀
0 Likes