Rosetta Space Probe To Land On A Comet

Chaitanya Kukde · Jun 5, 2014
Rank C2 - EXPERT
Rosetta, a space probe by the European Space Agency is set to do something that no space probe from earth has ever done: Orbit and land on a comet. It will study the metamorphosis of the Comet 67P/Churyumov-Gerasimenko from a quiet chunk of ice and rock, frozen solid by years spent in deep space, to a sun-warmed dynamo spewing jets of gas and dust into a magnificently evolving tail.

Comet 67P can be seen evolving a tail
​
Rosetta was launched in 2004 and it spent 10 years quietly hunting down its target. With the comet in sight in January 2014, Rosetta activated its cameras. On May 4th, a cloud appeared which turned the mass of rock and ice into a comet. Rosetta will now orbit the comet for the next 17 months. Then around November 2015, Rosetta will launch a lander named 'Philae' that will land on the surface of the comet. Due to absence of gravity, it will anchor by the use of harpoons, a novel technology in itself. The harpoons will dig in the comet surface and also pick up samples from the nucleus of the comet while Rosetta will continue to monitor the developments. 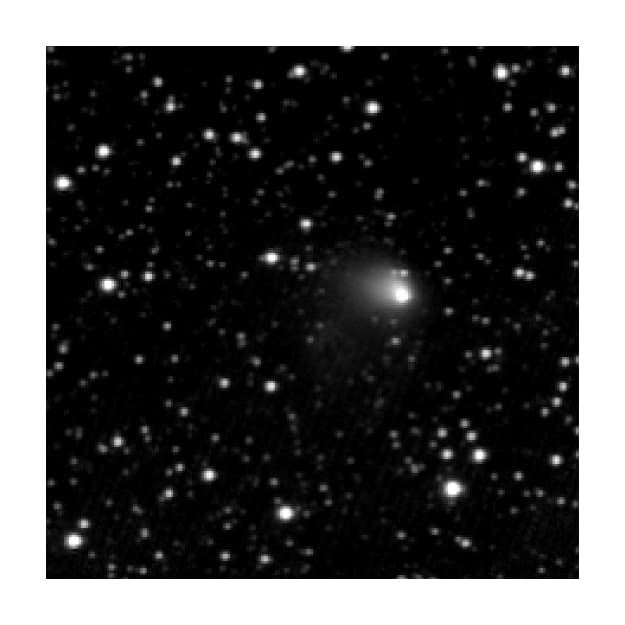 Closeup of Comet 67P/C-G on April 30
​
Many probes have flown past comets and have brought back samples of the comet's tail. The tail develops as a result of comet moving progressively closer to the Sun along its orbit. Comet 67P has an orbit time of 6.5 years. Even though it is still more than 600 million km from the Sun – more than four times the distance between Earth and Sun – its surface has already started to warm, causing its surface ices to sublimate and gas to escape from its rock–ice nucleus. As the gas escapes, it also carries a cloud of of tiny dust particles out into space, which slowly expands to create the tail or the 'coma'.

​
Comet studies are important from the fact that they often are time capsules containing primitive material left over from the epoch when the Sun and its planets formed. By studying the gas, dust and structure of the nucleus and organic materials associated with the comet, questions regarding the history and evolution of our Solar System, as well as questions regarding the origin of Earth's water and perhaps even life can be answered.

Sharvari Panchbhai · Jun 5, 2014
Rank C2 - EXPERT
After spending 10 years in space, the spacecraft's mission to study the comet at close-range is a great news.👍
0 Likes

Satya Swaroop Dash · Jun 6, 2014
Rank A3 - PRO
Researching a comet is definitely a difficult project not only you have to wait for a long period of time, every move needs to be done with pinpoint accuracy. Its was a good idea to use the harpoon process, because it seems rudimentary but still very effective.
0 Likes

Chaitanya Kukde · Jun 7, 2014
Rank C2 - EXPERT
Also, comets are pretty much unpredictable. What lies on their surface can only be hypothesized. The nucleus of Comet 67P is just 4 Km wide while the tail extends to more than 1300 Km. So studying the nucleus just by telescopes is very difficult. The tail of comets has been researched extensively but this a debut attempt to study the nucleus of a comet. Really commendable effort.
0 Likes