RoboRoach: Cyborg That Lets You Control Living Insects Via Smartphone

Ambarish Ganesh · Jun 11, 2013
Rank B1 - LEADER
Backyard Brains screws Kickstarter ethics big time with its RoboRoach creation, by biohacking real living cockroaches in what it terms as 'NeuroRevolution'. The RoboRoach, world's first commercially available cyborg is a brilliant amalgamation of neuroscience, engineering and evolution, which allows user full control over a living insect via his smartphone. Cockroaches use antennas on their head to navigate around, where these antennae are their sole sensors to obstacles. Neurons in the antennas respond to both touch and smell, and it's these neurons that carry information to the brain in the form of electric signals in the form of 'spikes'. Controlling these signals gives you full control over the insect. All you need is basic 'cockroach anatomy' knowledge, the RoboRoach kit and a smartphone that supports Bluetooth LE. 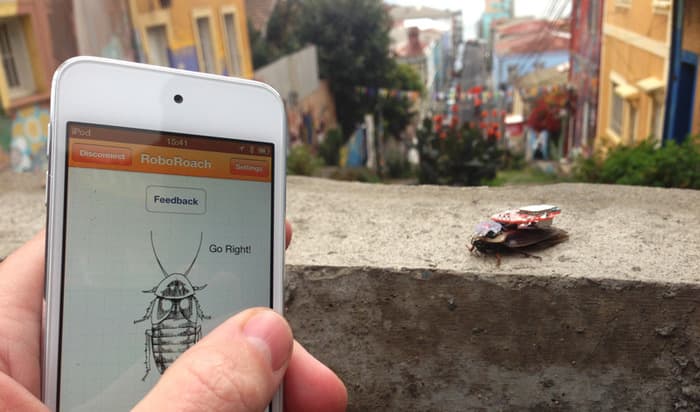 The procedure involves anesthetizing the bug by plunging it in ice-cold water. Then sand has to be poured down its pronotum (a plate-like cover over the cockroach's thorax) to negate the waxy inconvenience. After this is done, three electrodes are thrust into its pronotum. One wing is pinned, and a needle pierces the exoskeleton at thorax to feed in the wires. The bug is again plunged in ice-water to impede its recovery, post which the antennas are totally gone and what's left are hollows where the electrodes are glued. Hot glue maintains the giant reusable electronic backpack on the insect.

Post this "surgery", the cockroaches are just living hell, provided they stay alive. That's where the ethical screw-up comes in But Backyard Brains puts this across as a learning activity, where users get to learn about neural control of behavior, learning and memory, adaptation and habituation, stimuli selection and effect of randomness. But we humans rarely care 'ethically' when it involves bugs, so let's as well take is as served- an educational affair.

If you're interested in raising up your own creepy cyborg army, or if you just want to lend your support to this project, head over to their Kickstarter page here. Posted in: #Coffee Room
0 Likes
@ A2A Reply

zaveri · Jun 12, 2013
Rank A3 - PRO
Well i personally dont like the idea of converting a cockroach into a robot.

what i thought in the beginning when i looked at the title was, that a smart phone app has been developed to control any living cockroach, and i thought that such a thing would be quite useful to lead those pests into death traps.
0 Likes