@Ankita Katdare • 21 Nov, 2015
Presenting before you a 360 degree camera is a Japanese imaging & electronics giant - Ricoh Company Ltd. as they launch their all-new handheld device - Ricoh THETA S for the Indian market. Arriving with a discount, the Ricoh THETA S camera is priced in India at Rs. 35,995 and it's going on sale from Dec 14th via e-commerce portal Amazon as well as various Ricoh dealers across the country. The high-spec model has been designed to let users capture 360° photos & videos in high resolution from the comfort of their palm. Let's take a look at the various features onboard this mini camera. 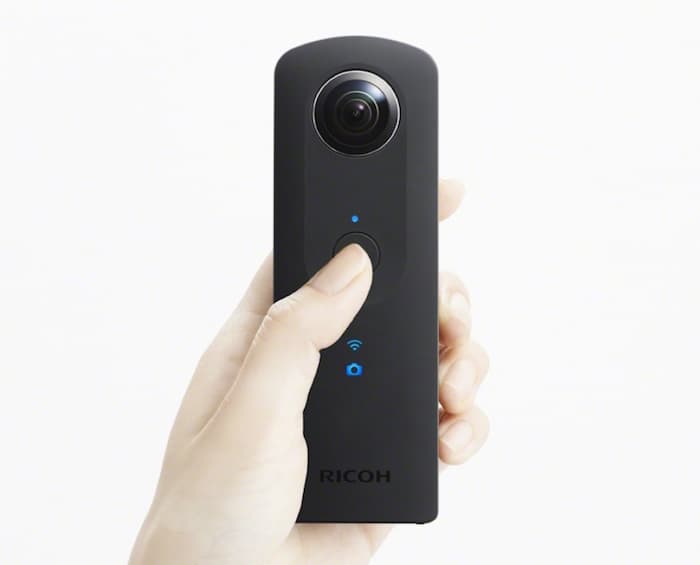 ​
The Ricoh THETA S comes with two 12 megapixel 1/2.3" sensors and 14.4 megapixel output. The camera lets you click spherical photos so that every photo can capture more in one frame.

It has support for Full HD (1920 × 1080 pixel) video recording at 30 fps rate. Apart from still images, the camera lets you capture movies that are max 25 minutes long.

The Ricoh THETA S brings Live View shooting at 10 fps where you can check exposure and white balance using a dedicated smartphone app. The shutter speed can be set from 1/6400 sec to 60 sec depending upon the requirement.

Featuring 8 GB memory onboard, the THETA S camera lets users access its Twin Lens system as well as f/2.0 max aperture. There are various modes at the user's disposal such as Auto, Shutter Speed & ISO priority.

The built-in WiFi support and compatibility with Google Maps as well as Google Street View are the additional smart features that stand out.

Coming to the technical specs, onboard the camera we find a Camera Status Lamp which says shooting in progress when lit, a shutter button to capture images, a wireless indicator lamp, a video recording lamp, a capture mode lamp and a memory warning lamp.

At the bottom of the device, there is a USB terminal, a HDMI port and a Tripod mount hole. On the other end i.e. the top, you'll find a microphone and a speaker. On one of the sides, there's a power lamp, a power button and two buttons one for wireless & capture mode for ease of access.

Last but not the least, a built-in chargeable lithium-ion battery powers the Ricoh THETA S and its battery life is said to be approx. 260 photos.

That's all there is to know about the newly launched 360 degree camera in town. The makers have started pre-booking for the device where customers can pay 20% advance i.e. Rs. 7199 right away and pay the remaining amount after the launch.

What are your thoughts about the arrival of Ricoh THETA S in India? Share with us in comments below.

A THEME FOR EEE COLLEGE MAGAZINE??

TCS recruits hundreds of engineering graduates through their placements portal TCS Next Step ( nextstep.tcs.com ). It's a gateway for the fresh computer science, IT and other engineers into the...
25.3k views
Read More →
Archives

Hindutva in the USA - Stamp with Narasimha image released

Arise, Awake, Stop not till the goal is reached! Hindutva is spreading, Nation beware. The US of A has released a stamp showing Narasimha. Fight this menace till your last...
5.6k views
Read More →
Archives

ISRO Chandrayaan-2 Scheduled For 2017 Take Off

Chandrayaan-2, India's ambitious second mission to the moon has been scheduled to take off sometime in 2017, the Indian Parliament was informed yesterday. Jitendra Singh, the minister of state in...
3.1k views
Read More →
Archives

Options for Computer Science Engineers Other Than Software Job?

some times i really think that taking Comp. Sc. as my stream of BE....restrict me in many ways specially when i compare it any other core branch.I mean i can't...
6.5k views
Read More →
Channels
👨‍💻 Remote Jobs 🗞️ News 🚀 Founders Circuit 🗄️ Archives ✨ Newsletter 🕹️ Changelog
About · Privacy · Terms of Service · Contact Us · © 2005 - 2022 CrazyEngineers. All rights reserved.