Researchers Integrate A Laser Source On A Silicon Photonic Chip

@Debasmita Banerjee • 17 Apr, 2016 • 1 like
In recent times, scientists have been working hard to achieve nanophotonics integration in the field of bioscience, in order to artificially develop, flexible and portable technologies to cure physical and semi-physical anomalies. A very recent breakthrough in this regard can be attributed to Christian Koos and his team from the Karlsruher Institutfür Technologie’s Institute of Photonics and Quantum Electronics (IPQ).

For the first time, the group realised a LASER source with an organic gain medium, and have grown the structure on a silicon wafer to create a bio-sensor. This work is worth noting because of its possible applications in the field of medical science, through which a non-invasive diagnosis for patients can be conducted.

Team leader Koos explained that they have gone through a challenging task of incorporating different optical components on a single chip, without hiking the cost. A newly developed sub field, known as silicon photonics depends upon the nanotechnological fabrication process of microelectronic devices, which however scales up the production of inexpensive photonic components. These tiny components are essential tools for information technology and biosensors. 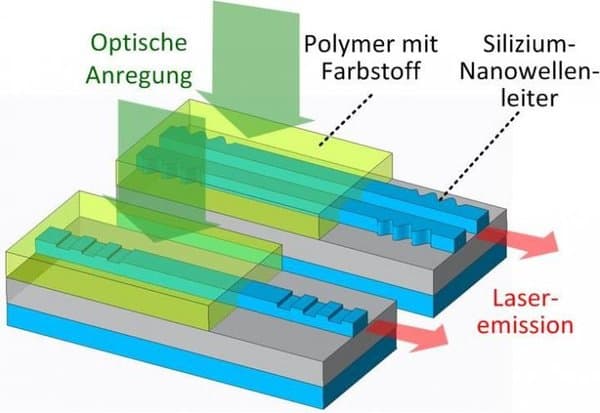 Though the methodology has developed through years of experiments, integrating a LASER source on a chip was not achievable as the nature of a semiconductor structure works against that of light emitters. When an electron jumps from one energy state to another energy state, the energy is released in the form of heat, rather in the form of vibrations, whose quanta are known as phonons, instead of photons which are necessary to release light.

To observe the required results, KIT researchers have engineered LASER sources in the infrared range. Laboratory processes include the incorporation of silicon nano-waveguides with polymer doped organic die, and the working force comes from a horizontally placed light source. The complete system was able to produce radiation of 1310 nm wavelength and a peak power of greater than 1 Watt per chip. The complete research report was published in the Nature Communications journal.

Stumbled upon a blog that did an analysis of the prices offered on books by Flipkart vs.HomeShop18, it looks like Flipkart's now charing way more to the customers. Is it...
3.1k views
Read More →
Archives

A lot of buzz got around as TATA initiated a campaign called # WeTheNanoGen as it was prepping to take the wraps off the latest variant of its people's car,...
3.1k views
Read More →
Archives

I have read that , best text book for propulsion is gas turbines , by many of my friends , what do you suggest me friends ?
3.8k views
Read More →
Archives

We all understand that technology is the utmost requirement in today's world. However one can always argue on word 'UTMOST', there are few that believes that Domain knowledge is much...
4.2k views
Read More →
Archives

Hi friends, i am finding a topic for my theases work at M Tech level. so if u have any topic please suggest me.
4.2k views
Read More →
Channels
👨‍💻 Remote Jobs 🗞️ News 🚀 Founders Circuit 🗄️ Archives ✨ Newsletter 🕹️ Changelog
About · Privacy · Terms of Service · Contact Us · © 2005 - 2022 CrazyEngineers. All rights reserved.