Sony finally unveiled the Playstation 4 launch dates. Though the company did not mention India in the global launch plan, we conclude that the PS4 will arrive in Indian markets some day in December. In the North America, Playstation 4 will be launched on November 15th, and Europe will get the console on November 29th. The company plans to launch the console in 32 countries before the end of the year.

We already know that Sony India's officials have confirmed that the gaming console will be launched in India before the end of this year. Given the official launch dates in USA & Europe, it'd be safe to assume that the console isn't coming to India by November end. The launch dates for other countries is as follows - 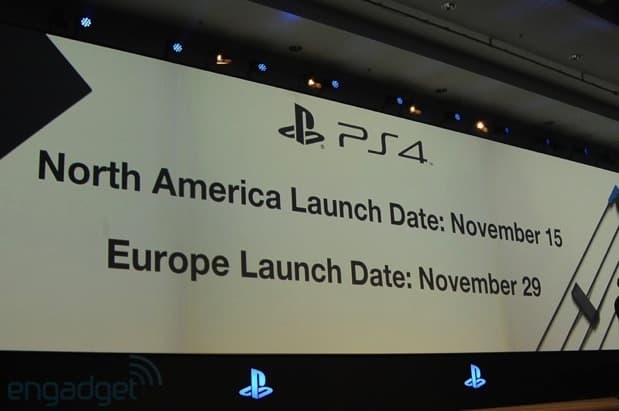 ​
Sony also confirmed that the 'Playroom' - a super cool augmented reality presentation will be installed on every PS4 console at the time of the launch. The company has partnered with several broadband service providers in US and Europe. We wonder if the company has similar plans for Indian markets. The console sales, we believe have been very limited in India. Expect the prices of PS3 to drop to about Rs. 15k after PS4 arrives here. PS2 pricing is expected to remain the same as it is now; but the sales of older consoles will definitely decrease.

We'll keep an eye on the developments. If anyone of you notices an official word about the exact launch date in India - please keep us alerted.
@Ankita Katdare • 20 Aug, 2013 Here is a trip down the memory lane for PS4 news followers for the past one year -

PS. Avid Battlefield 3 player online. Love RPGs - Western and Japanese. And games with the best storytelling ever (I am looking at you - Bioshock).
Greatness Awaits.
@Kaustubh Katdare • 21 Aug, 2013 @Kshitij Trivedi - Don't expect Sony India to make announcements just yet. Check out this discussion on CE about PS4 pricing in India: https://www.crazyengineers.com/threads/playstation-4-price-in-india.68456/ .

I think I can wait till December to get my hands on this beast! 😁

I think I can wait till December to get my hands on this beast! 😁

I think around 31999 or less would be a good price and something not later than 2 weeks after Europe launch which would be around 12-14 December would be awesome. Fingers crossed.

Although, somehow after seeing those 32 countries and India not on there, I have my doubts about 2013. Any idea if we can ship it in from Europe or the US? or will the electricity thing cause an issue?
@Kaustubh Katdare • 21 Aug, 2013 Yeah, I'd expect it to make it in the first week of December itself, but you never know. The launch price would be in the Rs. 35k range (my best guess now).
@prahu mac • 21 Aug, 2013 i think it would be great to see whether sony can compete with xbox 720 which releases in november!!!!
@Saandeep Sreerambatla • 21 Aug, 2013

Kshitij Trivedi
I think around 31999 or less would be a good price and something not later than 2 weeks after Europe launch which would be around 12-14 December would be awesome. Fingers crossed.

Although, somehow after seeing those 32 countries and India not on there, I have my doubts about 2013. Any idea if we can ship it in from Europe or the US? or will the electricity thing cause an issue?

There will be no electricity problem, they operate at different voltage and frequency (110V, 60Hz) and we operate at (220V and 50Hz). So you can buy a converter and that will solve the problem.
@Kshitij Trivedi • 21 Aug, 2013 Here's something depressing for Indian Playstation gamers.

Silent prayers. For our wallets.
@Nayan Goenka • 21 Aug, 2013 I was also expecting something like this would happen. The cost at which we are speculating the launch prices are fine if the value of ₹ is stable. Here the scene is worse. We are seeing constant irregularity and fluctuations in ₹. Speaking independently, this move from the makers is totally justified. They would rather not launch the product here rather than corrupting the market for it.
@Sarathkumar Chandrasekaran • 21 Aug, 2013 What can we expect new from this game marvel?
Can it outbeat Xbox?
@Satya Swaroop Dash • 21 Aug, 2013 Speculations suggest that the official announcement about the launch date of the PlayStation 4 in Asia will be come during the Sony Computer Entertainment Japan Asia Press Conference 2013 scheduled to be held on 9th September.
@Nayan Goenka • 22 Aug, 2013 I don't think that Sony will take the risk of launching a major product in such a market where the currency is not stable. No matter they launch it in Asia, I think it will be launched in India around February next year. They will have to be sure on the economic section. Plus next year is crucial in regards to Indian Economy since we can expect a government change.
@Kaustubh Katdare • 30 Sep, 2013 Update: Sony's official website has put up a notice that they'll start accepting preorders for the PS4 very soon. The price isn't known yet, but what we do know for sure now is that PS4 is launching in India in 2013; not in 2014 as many of us thought.

So, who's making a pre-order anyways?
@Kaustubh Katdare • 18 Nov, 2013 Okay, there's no sign of launch of Playstation 4 in India. We were told that the system will come to India in December; but there's absolutely no word from the retailers ( I enquired at local electronics megastore ) and no update from Playstation India officials.

I'm wondering the India launch will be pushed to Q1 of 2014. In any case, I believe it's better to wait for the first revision of the system with all the hardware bug fixes - several users have reported issues.
@Kaustubh Katdare • 18 Dec, 2013 Okay, the machine will be available in Sony stores and partner stores on January 6, 2014! -- Officially Confirmed.

Following the leads by Airtel & Reliance Jio, Aircel could be the next mobile network operator in India to launch 4G services. The operator is currently testing the network in...
836 views
Facebook Twitter LinkedIn
Archives

Hi guys !! I desperately need your help. First let me tell you about myself: I did my engg.(IT) from Pune university this year.I haven't got a job until now(haven't...
21.6k views
Facebook Twitter LinkedIn
Archives

Bluetooth to WiFi or WiMAX

Hi! i want to convert bluetooth signal to WiFi signal or some other technology. Is it possible ? 😔 If it is possible means how can i done this ?...
2.6k views
Facebook Twitter LinkedIn
Archives

Born and brought up in Hyderabad, Phalgun Kompalli hails from a typical middle class family. His dad is a charted accountant, mother a housewife and younger sister is pursuing her...
1.9k views
Facebook Twitter LinkedIn
Archives

Debates over the content and censorship of these forms of media have become increasingly prominent as mass production and communication technologies have enabled books, songs and images to be circulated...
2.9k views
Facebook Twitter LinkedIn