@Kaustubh Katdare • 12 May, 2013
Notion Ink's official website may show 'Busy Creating. Back Soon', but the Adam II specifications got leaked at the National Technology Day Awards 2013. The price of the tablet is expected to be in the Rs. 10k range while the specs do look impressive for the price point. Notion Ink's Adam (first) had failed to impress the gadget reviewers around the world and the company did earn a lot of negative PR as it failed to respond to customer complaints effectively. The company then went back in stealth mode to go back to the drawing tables and design their next machine. Let's see what Adam II packs inside -

Processor: The Adam II will be powered by ARM Cortex A9 1.5 GHz Dual Core CPU, adding ample processing power to the machine.

Adam II's brochure boasts of the secondary display, which can be used to get quick notifications for your apps & mails etc. There's a SIM card slot on the side along with other ports. The brochure also promotes two front facing speakers on the top of the screen.

Slideshow (Click On thumbnails to view in full size) 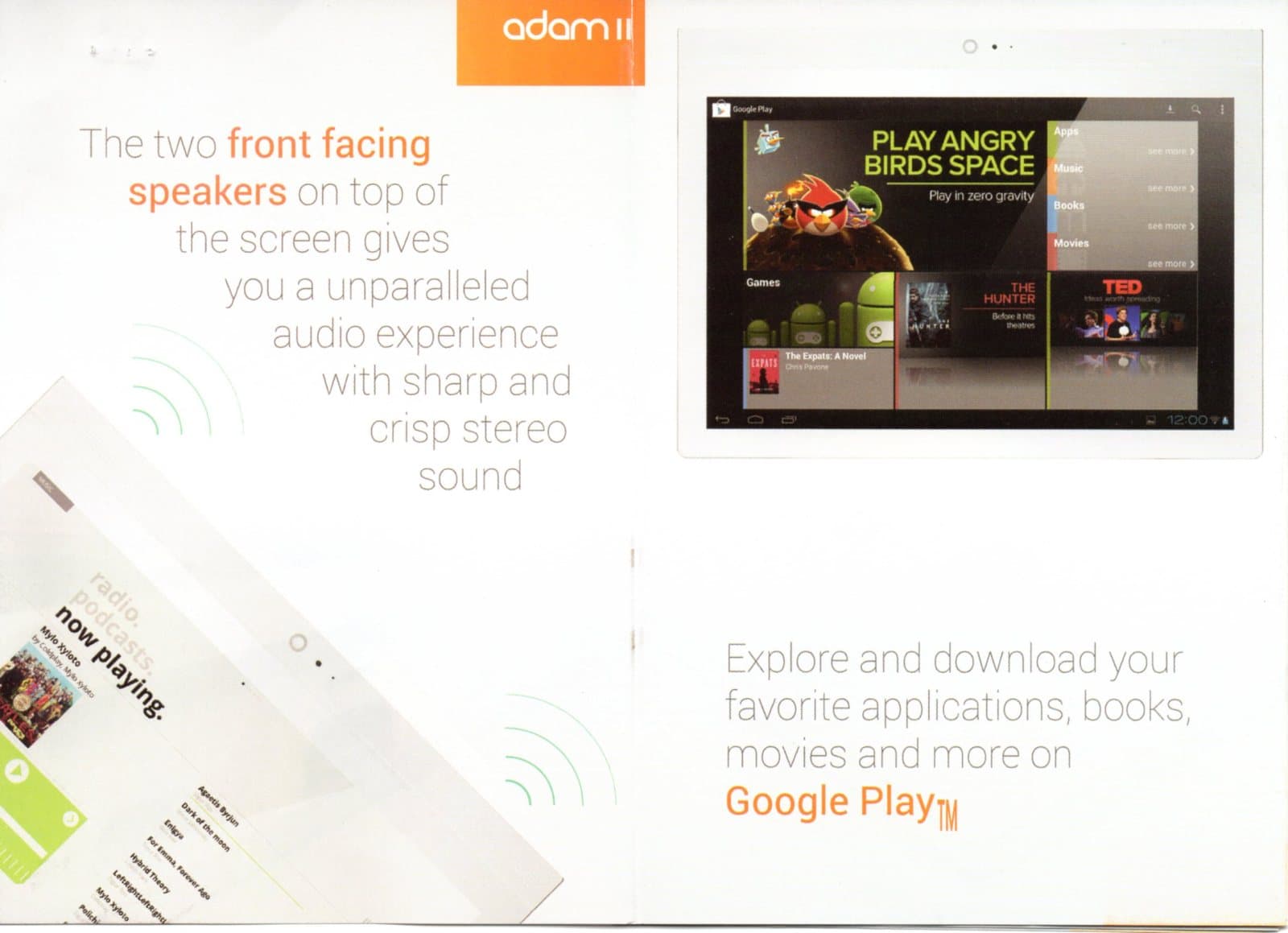 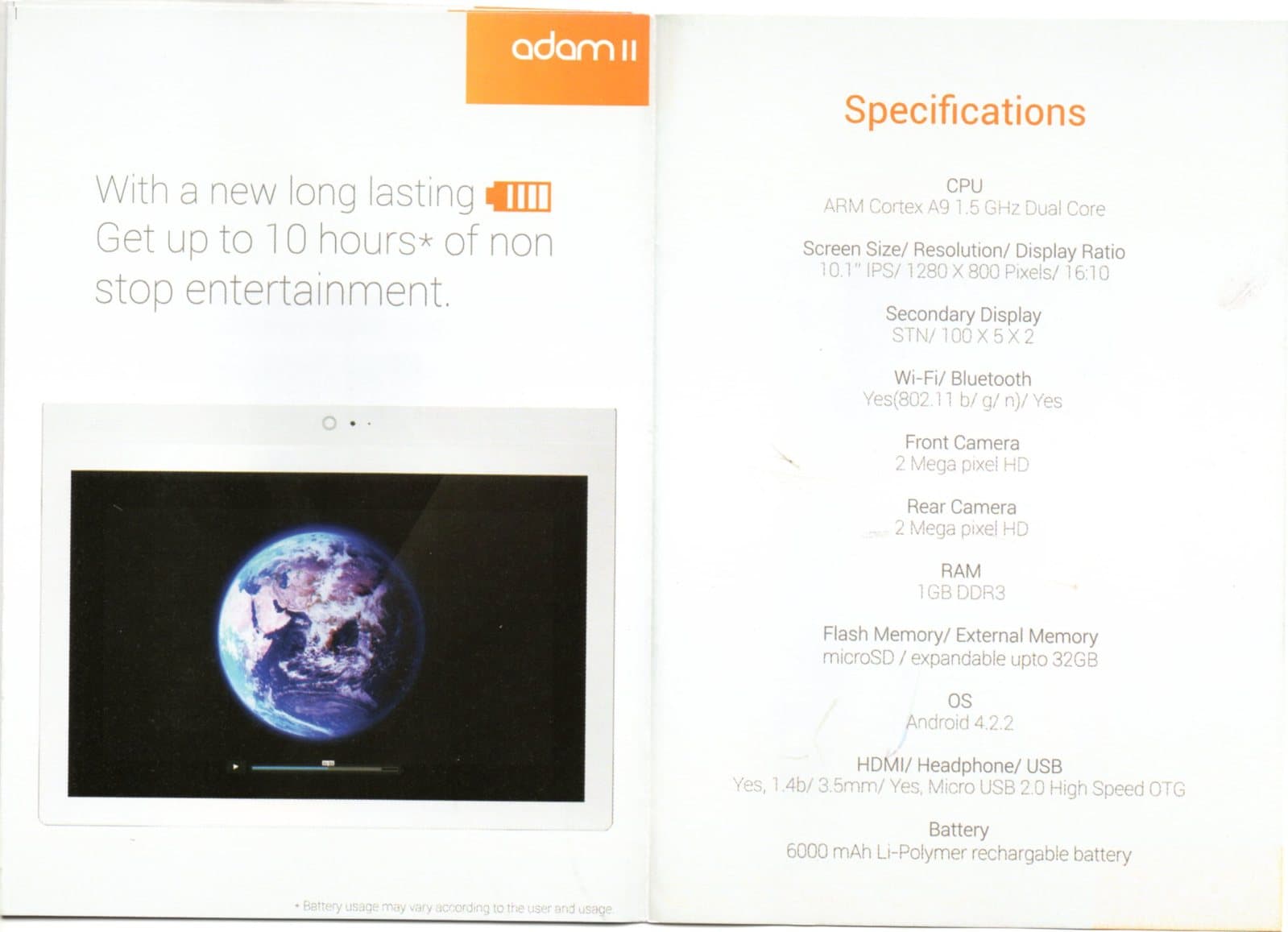 ​
​
Does that make you want to buy the Adam for the price that's been leaked? The tablet itself is expected to hit the markets in June. What's your take?​
@Abhishek Rawal • 13 May, 2013 Quite intimidating design, I like it.
Though it is surrounded by controversy due to it's first device was inoperable after OTA update, I feel this product gonna win hearts of many people.

I'll still wait for the reviews after its launch.
If the product will me keep interested after it's being released, then this gadget goes in top priority of my wishlist 😀
@Gandalf • 13 May, 2013 USB 2.0 , 1 GB DDR3 , and a 2 MP camera may be the features that may lower the selling point of the device , HDMI port, Display may be a buying point.
In India , though everything depends on price Rs. 12,000.00 rather than Quality of devices and performance

The price ensures it has robust sales in India 😀
@Kaustubh Katdare • 13 May, 2013 The failure of Adam and the overall customer service debacle might just prove costlier here. NotionInk must realise that just impressing the customers with software and hardware isn't enough - you've to back your product with equally good customer care - whenever they require it.

I'm not sure about the quality of the product they can deliver for Rs. 12,000. Electronics manufacturing is way cheaper than we think and I'm looking forward to pleasant surprises from NotionInk. The price point is very attractive though, I must admit.
@Gandalf • 13 May, 2013 Yes the price point is too attractive to ignore ,if it manages to get good critics for the device on performance , it will sell despite of bad customer service it has delivered earlier.

Micromax is a case NotionInk can take a leaf from, though its customer service is poor the quality it delivered through the A116 HD made their sales robust.
@Abhishek Rawal • 19 Jul, 2013 Update:
Reports have surfaced saying that rumoured price of Adam II for INR 10,000 was wrong. The price haven't been revealed by Notion Ink yet. But it is confirmed that it will not cost mere 10,000 INR.
@Kaustubh Katdare • 19 Jul, 2013

Abhishek Rawal
Update:
Reports have surfaced saying that rumoured price of Adam II for INR 10,000 was wrong. The price haven't been revealed by Notion Ink yet. But it is confirmed that it will not cost mere 10,000 INR.

The company seems to be taking forever to launch their products and it's being rubbed off from memories. The company ones looked like an 'Indian Answer' to the global tablet markets out there; but since then several things have gone wrong. I hope they make a good come back. I just don't want to see another china-imported tablet being sold under Indian brand name.
3.1k views

for some companies there is a video synthesis test. a movie clipping will be given and we have to write a few points about the clipping. Many students (even highly...
2.4k views
Read More →
Archives

Download WhatsApp Status photos and Videos into your phone

WhatsApp, the messaging service that has become a necessity in the age of smartphones shows no hints of slowing down. WhatsApp tries to integrate features that it sees on other...
1.8k views
Read More →
Archives

What are advantage of Norton's Theorem over Thevenin's ?

Can someone explain what are the advantages of Norton's theorem over Thevenin's theorem? I studied both Thevenin and Norton's theorem to reduce a complex network, and I know that Norton...
9.9k views
Read More →
Archives

CDAC 2014 admission season is ongoing and a lot of aspiring students are looking for information on first round of counselling. This discussion thread is dedicated to all the information...
2.4k views
Read More →
Archives

HOW TO PREPARE FOR GATE EXAM

hello every one i m a btech 3rd yrs ece student and i want to prepare for gate exam can any one suggest me regarding the preperation
5.8k views
Read More →
Channels
👨‍💻 Remote Jobs 🗞️ News 🚀 Founders Circuit 🗄️ Archives ✨ Newsletter 🕹️ Changelog
About · Privacy · Terms of Service · Contact Us · © 2005 - 2022 CrazyEngineers. All rights reserved.