NIST Researchers Demonstrate How Light Can Be Used To Build 'Molecules'

Ankita Katdare · Sep 12, 2015
Rank A1 - PRO
Star Wars fans, buckle your seat belts. Knowing that the current research work by NIST scientists might some day turn the fictional lightsaber into reality might just blow your mind. Yep. The laser sword that is used as an energy weapon to deflect blaster bolts in the Star Wars Universe could become a real thing. It turns out that a team of theoretical physicists from NIST or National Institute of Standards and Technology (US) has been able to show how 'molecules' made of light may be possible. In their findings, they found that weightless particles of light can be joined into a kind of 'molecule' with its own peculiar force. This is as exciting as it gets. 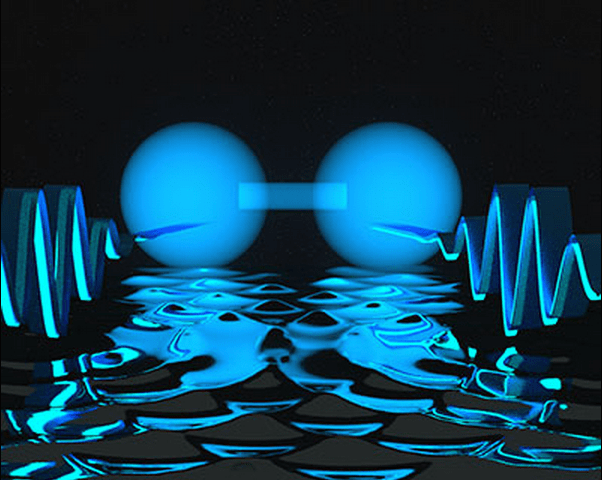 ​
The NIST research work is based on the previous work done by scientists from MIT, Harvard and Caltech. Back in 2013, they demoed a method to bind two photons together so that they are superimposed on top of one another as they travel. That was considered a breakthrough because by combining two photons, possibilities of some day constructing a real-life lightsabers started to feel probable.

The current work by teams from University of Maryland and NIST focuses on theoretically demonstrating how few parameters of the binding process can be tweaked to make the photons travel side by side at a specific distance from each other. This arrangement is similar to the way two H2 atoms sit inside a H2 molecule.

Making it possible to bind two photons at a fixed distance from each other opens up a lot of possibilities. Though the structure that they have now built isn't exactly a molecule, but it's a lot similar. By finding ways to arrange the photons in different ways, scientists could build complex states of light which can turn into more complex objects.

By engineering interactions between adjacent photos, researchers can created a whole lot of advancements in the fields of high-definition imaging or communication technology - two areas that are based on light-based research.

Moving forward, photons in this ingenious arrangement could be put to amazing applications. For instance, they could be used to replace electronic switches to work as information processors in our modern computers. Another application is creating a 'standard candle' that shines only a particular number of photons at a detector.

The NIST scientists are optimistic that further advancements in this technology could result in energy-saving applications in both computer & communication technologies. This could be achieved by replacing light beams & electrons by photons. In fact, Data traveling via fibre optic cables needs to be converted to electrons for processing in computers, a step that involves a lot of electricity usage. Energy losses can be greatly reduced by having photons work in both data transport and processing.

Alexey Gorshkov, a researcher from the NIST team believes that since photons are massless and travel at the speed of light, by learning how to slow & bind them, researchers can unlock a lot of hidden mysteries.

What are your thoughts about the new-age photon research? Share with us in comments below.