@Chaitanya Kukde • 17 Mar, 2014 • 1 like
Transcend has announced the launch of 16GB and 32GB DDR3 Registered DIMM (RDIMM) modules. These modules are aimed at boosting the memory in Apple Mac Pro 2013 workstation. The Apple flag-bearer was originally advertised to support up to 64 GB of RAM.

Angus Wu, Director R & D, Transcend, said that even though the factory-built RAM can handle most of the common applications, most of the 'power' users' requirements cross the 64 GB limit. These are the users who perform RAM-intensive tasks such as 3D graphics design, HD video editing and graphic-intensive gaming, to name a few. Also, applications such as Apple Final Cut Pro X and Adobe After Effects are notorious for high RAM requirements. In such cases, increasing the memory often offers the best solution. 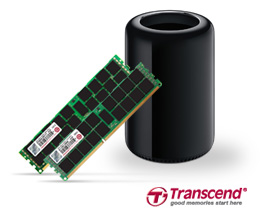 The Apple Mac Pro is a series of Intel Xeon based workstations. The second generation Mac Pro was announced in December 2013. The Mac Pro series is the most powerful computer offered by Apple, in terms of speed and performance. Apple Mac Pro tech specs can be read here.

Hi all, I'm new here. Found this awesome site through google. I would like to know anything and everything about rack and pinion especially the FORMULAS when designing them. I...
12.4k views
Read More →
Archives

why do we refresh?

anyone can tel me that why do we refresh? like right click and click on refresh. or use F5 button which is use 4 refresh.
2.2k views
Read More →
Archives

Summer Internship At Startups in India - How to apply?

As summer is fast approaching, thousands of engineering students in India are looking for opportunities in MNCs to apply for a position of a summer intern. While it might seem...
4.9k views
Read More →
Archives

We've the latest news and I hope it's a rumor. Infosys might be laying off about 5000 employees in the coming days, the TOI is reporting. I'm not sure if...
3.5k views
Read More →
Archives