Ankita Katdare · Feb 9, 2015
Rank A1 - PRO
A new class of research spacecrafts known as 'CubeSats' are being readied for future space missions. About 4-inches in length, the Cube shaped Satellites weigh not more than 3 pounds are also known as nanosatellites. Under NASA's CubeSat Launch initiative (CSLI) these CubeSat payloads can fly on rockets planned for upcoming launches. Under the CSLI initiative, NASA is encouraging teachers and students to participate in the STEM disciplines with their research work. The CubeSats will enable education research, various technology demonstrations as well as science missions. Space enthusiasts can use them to study a wide range of topics such as how the solar system was formed to more advanced technologies such as a new radiation-tolerant computer system.

So far, many CubeSat missions have been flown with ELaNa-I in 2011 to ELaNa-X mission as recent as January 31, 2015. NASA researchers have selected 14 CubeSats from various different states for upcoming rocket missions that are scheduled to launch in the next 3 years till 2018. These CubeSats come from various universities, NGOs and NASA Field Centers across USA. With the CSLI initiative, NASA hopes to involve the entire nation in their future endeavors and the march towards various space exploration goals. 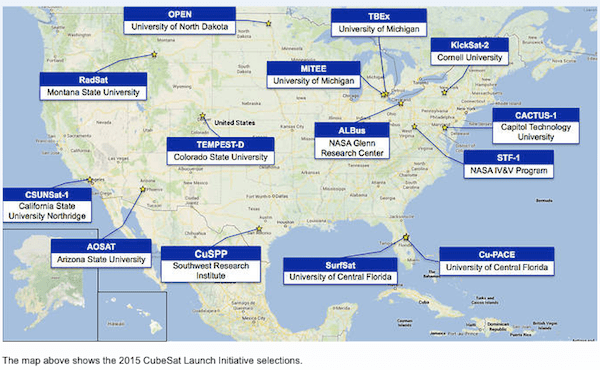 Last year, around the same time in February, ISS released Flock-1 - A fleet of 28 miniature satellites. The Flock-1 project was a brainchild of Planet Labs, a San Francisco based organisation. Each CubeSat was called 'Dove' and was capable of capturing images of Earth from various angles and later transmitting them to the ground control station.

Update: Highlights of the CubeSats from various organisations -
So far, NASA has launched 36 CubeSats under the Educational Launch of Nanosatellite (ELaNa) Program. In 2015, four separate ELaNa missions will carry seven CubeSats. What are your thoughts on that? Share with us in comments below.

Ankita Katdare · Feb 10, 2015
Rank A1 - PRO
Wondering if any Indian universities could participate in the development of CubeSATs to be sent into the space...
0 Likes