@Ankita Katdare • 02 Feb, 2014 • 4 likes
South Africa's popular social networking app 'Mxit' has been launched in India today. In association with India's World Cup winning coach - Gary Kristen, the Mxit team has revealed the availability of the instant messaging app Mxit for the Indian audience. Developed for the Java, Nokia, iOS, Android, Blackberry and Windows phone operating systems, the latest update on Mxit app features facility to conduct group chats with friends. Users can chat and share photos with up to 50 friends at the same time. An interesting feature is the ability to set a Backdrop for the Chat window from your photo gallery is available exclusively on the Mxit app for Android. The new, redesigned profiles with cover images (similar to Facebook) are now an integral part of the app. Users can sign up to the Mxit app and create multiple profiles and switch between them easily with fast account switching feature.

Mxit app is currently available for download across more than 8,000 different feature phones, smartphones and tablets. Speaking at the launch, Sam Rufus Nallaraj, CEO of Mxit India Pvt. Ltd. shared his views on the app's market in India. He believes that Mxit app has the potential to attract the low end handset users and thereby replace the audience's reliance on SMS on feature phones with a cheaper, more engaging chat alternative. Another attractive feature of the app is its customized version for each user as per their region. Currently available in English and Hindi, the team is working towards offering 10 Indian languages (Bengali, Telugu, Marathi, Tamil, Gujarati, Kannada, Malayalam, Punjabi, Assamese and Oriya) within six months. Take a look at some of the app's screenshots - 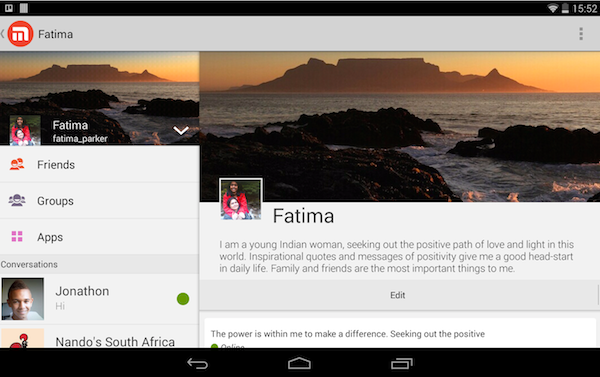 ​
With an expected reach of more than 500 million users in India, the Mxit team is looking forward to a tremendous growth and a tough competition from its contemporaries such as Whatsapp, Facebook Messenger, WeChat etc. The app can also leverage the power of the cloud to give some smartphone like features for its users. In fact, users can do a lot more than just interacting with friends using Mxit. Its powerful ecosystem lets users access everything from official PSL club sites to poetry clubs. Mxit apps let you engage with communities who share your interests. Users can get access to sport, news, weather, entertainment, advice, education and learning tools

The app can be download on popular apps stores, or directly from mixt.com/in or by texting MXIT to 57333. How do you like the features of Mxit app? Share your thoughts with us in comments below.
@Shailaja Tiwari • 02 Feb, 2014 Interesting app .....Gotta try now....
@Ankita Katdare • 02 Feb, 2014 And when Whatsapp came, no one thought it will be a topics of daily discussions. 👀
@Abhishek Rawal • 02 Feb, 2014 • 1 like Just tried this social networking app. It's quite smooth & works amazing.However, there is nothing 'new' in this app, so it is unlikely that whatsapp users will move to mxit. If they would've added features like G+ or FB alongwith it then this app might've made an impact. The profile menu is inspired from G+ app.
@Abhishek Rawal • 02 Feb, 2014 I will never understand why these apps require to access phone number. When I opened the app for first time, it auto detected my location & phone number, which scared the shit outta me. So, I just deleted account from option given in settings.But I doubt whether they really remove account or not.
I am still looking for chat application which doesn't access your number nor stores chat in their servers. Closed source chat applications are major threat now-a-days.

Please check terms & permissions before installing any app. I would suggest you to use opensource apps from 'F-droid' (alternative to playstore) rather than these closed source identity stealing apps.
@vinikatyal1 • 13 Feb, 2014 • 1 like @abhishek i am from Mxit India and we don't steal anyone's personal data. The phone number is required to validate your identity. Hope that helps. and we also have apps on Mxit which other chat platforms don't offer.
@vinikatyal1 • 13 Feb, 2014

Ankita Katdare
And when Whatsapp came, no one thought it will be a topics of daily discussions. 👀

Ankita Katdare
@vinikatyal1 Good to have you here with us. Could you tell us more about the unue apps on Mxit? Please enlighten the members of the community.

Hey Ankita, Mxit is a Chat app primarily but has apps inside the platform as well you can play chess, we have gary kirsten app etc. Mxit on iphone and Android has features like Backdrop and Doodle which other char apps don't have 😀