Ankita Katdare · Mar 14, 2014
Rank A1 - PRO
Soft robotics is taking a plunge deep down in the water with MIT's new research work - in a good way though. A team of researchers from MIT - including Andrew Marchese, a graduate student from the Department of Electrical Engineering and Computer Science and lead author on the new paper, Daniela Rus, director of MIT’s Computer Science and Artificial Intelligence Laboratory and postdoc Cagdas D. Onal - has developed an autonomous soft robot that looks and behaves like a fish and has the capability of rapid body motion. The real fishes can manuever under water by convulsing their bodies in fraction of a second to change direction. The new soft robot from MIT replicates their nature of action and not just has a soft exterior, but it also derives its power from a fluid flowing inside it.

The new robotic fish from MIT was designed by keeping in mind infinite range of configurations that comes from the softness and the ability to deform the body continuously.The continuous curvature of the fish’s body when it flexes is what allows it to change direction so quickly. 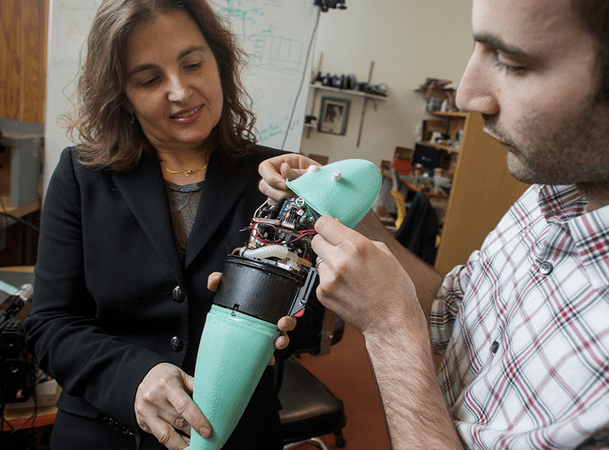 ​
Each side of the fish’s tail is bored through with a long, tightly undulating channel. The channel gets inflated by the carbon dioxide released from a canister in the fish’s abdomen. This in turn bends the tail in the opposite direction. Each half of the fish tail has just two control parameters: the diameter of the nozzle that releases gas into the channel and the amount of time it’s left open. Take a look at the video put together by MIT for a demonstration of the new soft robotic fish -


​
How do robotics enthusiasts here like the concept and the implementation? Share with us in comments below.