Kaustubh Katdare · Jul 3, 2015
Rank A1 - PRO
Bill Gates and team started Microsoft with a vision to put desktop on every desk and after decades; that vision has come to reality. All over the world, Microsoft powered desktop operating system Windows totally dominates the desktop operating system markets with ~ 91% market share. The report was published by NetMarketShare that puts Windows on the top followed by OSX at ~7% and Linux at third place with ~1% of the entire desktops.

Microsoft knows how important Windows it is for the future of the company and the computing industry itself; and is therefore taking several bold steps to ensure that upcoming Windows 10 will keep their market share intact. Most importantly, Microsoft has said that Windows 10 will be their last operating system that will keep getting incremental upgrades; a la Apple OSX. 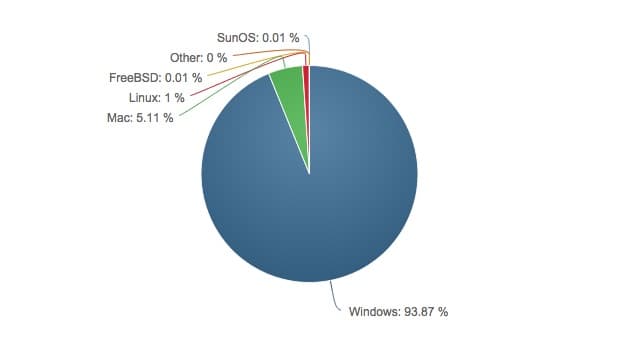 ​
Among all the Windows versions, Windows 7 seems to be the most popular throughout the globe, beating competition from Windows XP (second) and Windows 8.1 (third). When Microsoft rolls out Windows 10, it will be a huge challenge for their marketing teams to ensure that Windows 10 gets installed on millions of machines.

It's interesting to note that globally, the desktop markets are on the decline as mobiles and tablets continue to replace desktops and laptops. The story on the mobile side is very different. iOS seems to rule with 59.21% followed by Android at 25.01%.

Do check all the interesting statistics on the source link below. Let us know your views.

Is this worldwide. Unusual data.
IDC smartphone share: https://www.idc.com/prodserv/smartphone-os-market-share.jsp
The Marketshare : https://www.netmarketshare.com/oper...aspx?qprid=8&qpcustomd=1&qpct=3&qptimeframe=Q
However I trust on IDC. *even netmarketshare saying Android on 51%.
For windows desktop share. It should fine number. Windows keep ruling the desktop version. I don't see it is going to decline unless Microsoft messed up itself.
0 Likes

Kaustubh Katdare · Jul 3, 2015
Rank A1 - PRO
I'm surprised too. Maybe they changed the labels. But that's what their website shows. It's no brainer that Android market share has to be bigger. I'm guessing they established their statistics by counting the number of visitors to a couple of websites using smartphones. I think iDevice would definitely succeed on that front. Not a reliable way to measure market share though.
0 Likes