@Ankita Katdare • 09 Aug, 2015 • 1 like
Working with foreign clients? Travelling solo to a new country? Translator apps are a big boon. While Google Translate has been dominating for years for any of your translation needs, a new challenger with the name 'Microsoft Translator' has arrived with aplomb. The best part is that the Microsoft Translator app works not only with smartphones & tablets, but also with Android Wear devices as well as the Apple Watch. This means that whenever you are on-the-go with your LG G Watch or Nexus 9 tablet, you can simply turn on the app and get both text-based or voice-based translation instantly. The Android as well as iOS version of the app supports up to 50 different languages. If you are using the app in India, currently only Hindi is supported.

The app can let you speak both translated words or phrases as well as show you a text display of what you are speaking on the screen. The app also allows you to copy-paste text from and to other apps for quick translation. This means you can capture a snap of a billboard, have Evernote convert the text on it to selectable text, copy it to Microsoft Translator and get it translated to you native language. Easy peasy! Another interesting feature of the app running on Windows Phone is the ability to point camera at the text or phrase to be translated and get real-time translation. 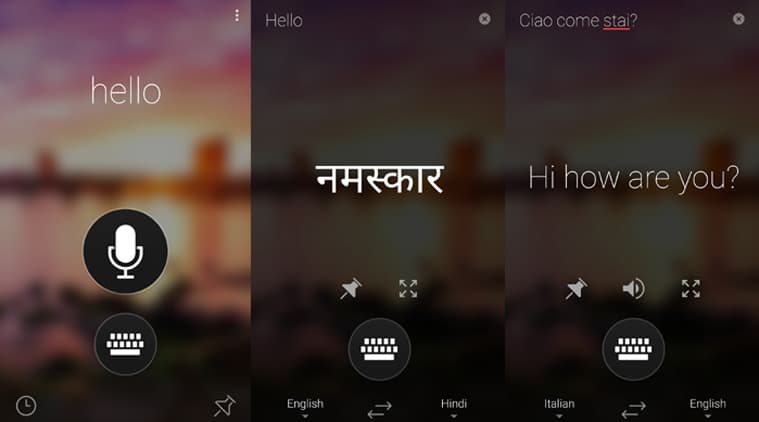 ​
If you are not sure about the pronunciation of the words you want to get translated, you can let the Translator speak the phrase for you. If you are in a really noisy environment and the app can't decipher what you are saying distinctly, you can simply show your smartwatch or phone on the street. They can read the phrase in their language and tell you want you need to know. The app has an option to view large full-screen translation cards for the same. 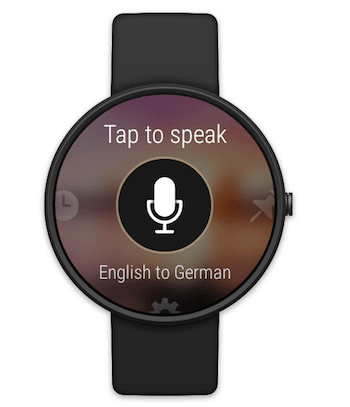 ​
Users can bookmark their translations so that they can be referred at a later time. If you are using the app on more than one device, the contents will be synchronized across them all. So what you have on your watch (the bookmarks, the settings) can be checked later from your phone too.

Since the Microsoft Translator app is a direct challenger to the Google Translate app, comparisons are bound to happen. The most notable difference between the two apps, apart from Google’s larger language database, is the interface. While both offer the most basic features on screen, the UI of Google Translate comes with the usual blue & white tone, whereas the Microsoft Translator comes with a blurred image in the background with warmer colours.

While both apps are really fast, Google has a winner feature with its support for 8 regional languages in India alone. These include: Marathi, Punjabi, Bengali as well as Gujarati.

What are your thoughts about the Microsoft Translator app? Share with us in comments below.

Source: Google Play | iTunes Store
@Ankita Katdare • 09 Aug, 2015 I have just started using this app for my Japanese translations and it was really awesome to see that the app recognised my accent. Either the app is really smart or my accent really is getting better. 😁
@Jayesh001 • 12 Aug, 2015 now they are fascinating towards the android tech and they just stop minding their own microsoft products..about win 8 and mobile devices 😛
@Kamlesh Vora • 12 Aug, 2015 I have been using this app for couple of months on my win 8.1 pc and phones. But I never get satisfied response. but I have observed that Android and iOS users like it very much. That's also in news that Win 10 for phone will be able to install in Android devices, Mi 4 has been under testing for it.
Check fuse.microsoft.com for some more from Microsoft.
@Kamlesh Vora • 12 Aug, 2015 Just now tested on Windows 10 PC its working much better now. 😀
3.7k views

how can we proove that the frequency of dc is zero???
5.6k views
Read More →
Archives

In which stream can we explore better in present scenario of IT field..Can anyone give a clear idea about SAP, JAVA, .NET, ORACLE, BIPM, UNIX CPP, ASSURANCE, MAINFRAMES ETC..
13.6k views
Read More →
Archives

When a real gas, as differentiated from an ideal gas, expands at constant enthalpy (i.e., no heat is transfered to or from the gas, and no external work is extracted),...
9.2k views
Read More →
Archives

EVDO Vs CDMA 1X - Is there any difference?