@Ankita Katdare • 06 Aug, 2013 • 1 like
Microsoft, the software giant, has announced its product - Microsoft Office 365 University in India for both full-time and part-time students of accredited colleges and universities. Targetting thousands of colleges in India, Microsoft has made this product available only for purchase via online system. Office 365 University is also going to be made accessible to faculty members of these colleges and universities. So now, students as well as teachers in India can buy the latest versions of Word, Excel, PowerPoint, Outlook, OneNote, Publisher, and Access for your Mac or PC. (Compatible only with Windows 7, Windows 8, and Mac OS X 10.6 or later)

The four year subscription can be bought at a price of Rs. 4199. There's a special offer going on too. If you buy your copy before September 28, 2013, you get 12 months of Xbox Live Gold. There you have the most complete set of office applications that come with office on demand and an additional 20 GB premium SkyDrive Storage. Students in the final year of a course would also be able to secure Office 365 for four years. That's just what you wanted, right? And there's also the facility to call phones in over 40 countries with 60 free Skype world minutes per month. Use Skype world minutes from any device where you have Skype installed, whether it’s your mobile phone, tablet, TV, or other device. 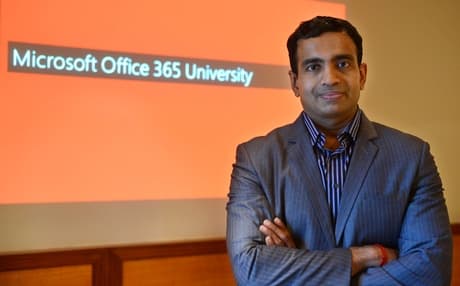 ​
Ramkumar Pichai at the press conference on Tuesday​

Your eligibility will be validated online at www.office.com/verify. During the redemption process, you will be prompted for your school email address or logon, or international student identity card (ISIC). You can process a manual verification request by completing the manual verification form and uploading a copy of one of the following documents: Dated student ID card, Current student report card or progress report and Dated current class schedule.

Addressing a press conference here on Tuesday, general manager of Microsoft Office division, Microsoft India, Ramkumar Pichai said, "Office 365 University will be a trusted and integral part of students' everyday always-on, always-connected life, taking full advantage of cloud and touch capabilities."
@Ankita Katdare • 07 Aug, 2013 What are your opinions about the pricing, friends? Would you buy one?
@Prashant Sinha • 07 Aug, 2013

Ankita Katdare
What are your opinions about the pricing, friends? Would you buy one?

Way too high. Given most of the engineering students are broke, I'd personally settle for Google Docs.
@Kaustubh Katdare • 07 Aug, 2013

Prashant Sinha
Way too high. Given most of the engineering students are broke, I'd personally settle for Google Docs.

Thank you for the correction. I've verified and updated the article.
@Prashant Sinha • 07 Aug, 2013

Kaustubh Katdare
Thank you for the correction. I've verified and updated the article.

Then I guess I should take back my comment! 4,199 for four year with full collaboration and power of MS office is a steal! it translates to about 1050 per year. Which is, not too high..
@Ankita Katdare • 07 Aug, 2013 Yeah. Stupid Mistake. 👎 Goofed up the authentic sources.
They would never keep the prices too high when releasing for the Indian market.
@Ashraf HZ • 07 Aug, 2013

ash
Yep, thats quite a steal.

Right. It's less than $100 for four years. I am still looking forward to Google stepping in.
@Ankita Katdare • 13 Aug, 2013 The price has got a lot of people commenting on this great strategy.

"It’s great to see this initiative," says Peter Wiegandt, who is a Information technology consultant. "The benefit behind Microsoft Office 365 is three-fold. This will reduce the amount of software piracy, which has, unfortunately, become abundant in today’s society. The less piracy there is, the more revenue software companies can generate from selling products. Lastly, students and staff at Indian colleges can now access Microsoft applications through a cloud service, which they were unable to do before. Everybody wins!"

Peter Wiegandt predicts that Microsoft Office 365 will be welcomed to tremendous sales over the next few weeks.
@Nayan Goenka • 13 Aug, 2013 Yea of course. Plus with Microsoft directly tangling with individual students and educational institutions, maybe its good time for them to capture much of Indian Market with best of the deal. You use Office 365 today as a student, you definitely buying more and more of their products in later stage after judging the quality. And before you know, all your system is filled with original Microsoft products. And If I could think right, Microsoft should introduce similar schemes at Indian Price Tags for their Operating Systems and Developer Tools. This will surely guaranty loyalty of the market.
5k views

Debates over the content and censorship of these forms of media have become increasingly prominent as mass production and communication technologies have enabled books, songs and images to be circulated...
10.4k views
Read More →
Archives

charge density and current density in free space are zero. why???

hello everyone i would like to know why charge density and current density in free space are zero??????????
5.9k views
Read More →
Archives

Voonik is a Chennai-based startup that has brought a personal shopping platform to life. Currently acting as your shopping assistant to help you dress well and well within your budget,...
11.3k views
Read More →
Archives