@Ankita Katdare • 27 Feb, 2014 • 1 like
Adding two new tablets to its portfolio and gallery, Micromax has today launched Micromax Funbook Ultra HD P580 and Micromax Canvas Tab P650E in India. Let us take a look at the specs and features of both these tablets one by one. Featuring a 7.8-inch screen with IPS display that has a resolution of 1280 x 720 pixels, Funbook Ultra HD P580 runs Android 4.2.2 aka Jelly Bean operating system. Processing its way from a 1.2 GHz quad-core CPU, the this one sports a 5-megapixel rear camera, whereas a 2-megapixel front-facing one. With support for voice-calling facility, the tablet features 3G data support using SIM card.

On the memory front, there's a 1GB RAM and 8GB internal memory which is expandable up to 32 GB via microSD card slot. Connectivity features bring in 3G, Wi-Fi 802.11 b/g/n, Bluetooth and GPS / aGPS on the platter and a 3.5 mm audio jack is there for plugging in your earphones and listening to FM Radio. Deriving its power from a 3600 mAh Li-ion battery, the Funbook Ultra HD P580 tablets has two color variants - black and white color. There was no word about the official launch, but the tablet is listed on e-commerce portal HomeShop18 for a price of Rs. 11,990. 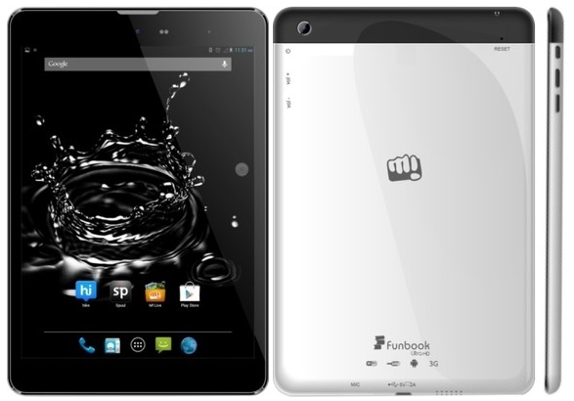 ​
Next one on today's launch list is Micromax Canvas Tab P560E, a 7-inch tablet with a 1.2GHz quad-core processor and 512 MB RAM. The tablet's internal memory sums up to 4 GB and can be expanded using a microSD card slot up to 32 GB. Canvas Tab P560E's rear is adorned by a 2 megapixel camera, while the front side has a VGA one for taking selfies and making video calls. Powering this tab is a 3000 mAh Li-ion battery and on the connectivity front - there's no 3G, but there is support for WiFi, CDMA 800, Bluetooth and GPS. On the tablet's body, you will find a 3.5 audio jack and a micro USB 2.0 port.

Running on the old Android 4.0 Ice Cream Sandwich OS, the tablet is priced at Rs. 8,999 and is available on e-commerce portal Infibeam for retail. What are your thoughts on the specs, features and prices of both the new tabs in India? Share with us in comments below.
4.5k views

Hyundai Motor India Ltd (HMIL) has launched the automatic variant of its popular car - the Hyundai Grand i10. It is now being shared that the Grand i10 Automatic (AT)...
4.2k views
Read More →
Archives

A Screw & Bolt is an integral part of every engineer's toolkit. Every hobby engineer needs them as well. Here's a simpler chart that gives you a quick view of...
3.7k views
Read More →
Archives

Those who are preparing for GATE 2014 examination can attend this examination to check your progress. This free mock examination will be conducted by TIME institute on OCT 6 all...
5.3k views
Read More →
Archives

The Indians and the Chinese are familiar with the UC Browser. Developed by UCWeb Inc., a Guangzhou, China-based company owned by Alibaba.com, this browser has statistics suggesting that it has...
3.9k views
Read More →
Channels
👨‍💻 Remote Jobs 🗞️ News 🚀 Founders Circuit 🗄️ Archives ✨ Newsletter 🕹️ Changelog
About · Privacy · Terms of Service · Contact Us · © 2005 - 2022 CrazyEngineers. All rights reserved.