@Ankita Katdare • 08 Sep, 2014 • 2 likes
Micromax Canvas Nitro A310 has been launched in India at a price of Rs. 12,990 to take on with the likes of Xiaomi Mi3 and Moto G (2nd Gen), both of which bear a similar price tag. The specs being offered by Micromax with the new phone in its Canvas series is nothing short of mind-blowing at the price it is offered. Powered by a 1.7GHz Tru-Octacore Mediatek 6592 processor and an ARM Quad core Mali 450 graphics unit, the Canvas Nitro smartphone packs inside it - 2GB RAM and 8 GB memory which is expandable upto 32GB via microSD card.

The 5-inch HD IPS screen has a resolution of 1280 x 720, a pixel density of 294 ppi and 178 degree viewing angle. An interesting addition here is the presence of Oleophobic Coating, which makes sure that the user's fingerprints don't stain the screen. The camera on the rear end is a 13 MP Auto focus that comes with Sony IMX135 stacked with CMOS sensor, whereas on the front there's a 5 MP BSI Fixed Focus camera with OV5648 Sensor for capturing selfies. Another new feature is - Smart Gestures! With Micromax Canvas Nitro, users can customize gestures as per their comfort. So, assigning gestures such as Pinch In, Pinch Out and Double finger swipes to access different apps is super easy. 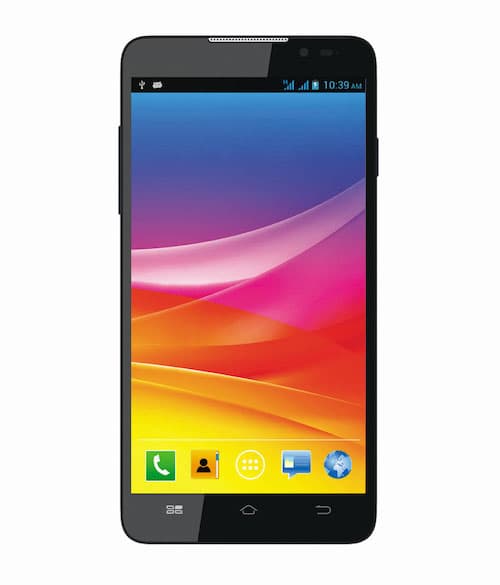 ​
Running on Android 4.4.2 KitKat operating system, the Micromax Canvas Nitro features a 2500 mAh battery that offers 10 hours talk time and 320 hours standby time. Apart from all these, the Dual SIM phone brings support for the usual 3G, WiFi, USB, GPS and Bluetooth 4.0 among the connectivity options. With that, we come to the end of the tech specs list and the features highlighted by Micromax.

Launched exclusively on Snapdeal, the phone has already started selling. To us it seems like, Micromax is walking on the steps of the Flipkart-exclusive launch strategies that've worked the best in the recent past for many new smartphones.

We recommend that you take a look at the features offered by Moto G (2nd Gen) priced at Rs. 12999, Xiaomi Mi3 priced at Rs. 14,999 and the upcoming OnePlus One before deciding what suits best to your preferences. We would love to read your comments on the specs and looks of the all new Micromax Canvas Nitro, so shoot in the replies below.
@Abhilesh Malik • 08 Sep, 2014 Heyy, I want to buy a phone so can you please suggest me which would be better out of Moto G(2nd Gen) and Micromax Canvas Nitro so according to you which is more better and value for money ??
@Divyaprakash KC • 08 Sep, 2014 • 1 like On a lighter note, I would love to see firefox OS running in these phones than resource hungry android. I am not sure what "1.7GHz Tru-Octacore " is, but it is Mediatek. Can any hardware engineer let us know what do they think of Snapdragon quadcore vs Mediatek "Tru-Octacor" ?
@Divyaprakash KC • 08 Sep, 2014

Hmm, what are your values 😉 Then we can talk about the money 😛
@Sarathkumar Chandrasekaran • 08 Sep, 2014 • 1 like awesome specs. hats off to micromax initiative. micromax definitely steals the cup with specs. i love micromax over motoG.
@Rajni Jain • 08 Sep, 2014 • 2 likes I love Micromax as they understand the users pain lies in battery, and they gives a strong battery.

I would never recommend buying it, as they are selling it exclusively from snapdeal which is one of my *NOT* so favorite (disappointing 😳) e-shopping portal.
@vishal Lokhande • 08 Sep, 2014 • 1 like Though Micromax provided 2500mAh battery , I saw a long line @ micromax care center regarding battery backup problems
😭 even though my brother face same issue . battery drain . and also mobile got heated during charging . 👎.
Though company provides affordable models they lagging in quality and performance.
@Jay Binod Singh • 08 Sep, 2014 • 1 like

Abhilesh Malik
Heyy, I want to buy a phone so can you please suggest me which would be better out of Moto G(2nd Gen) and Micromax Canvas Nitro so according to you which is more better and value for money ??

Micromax Phone is good but their problem is update... you will never get this... I am using Canvas 4 since appx 1 year and they are not releasing update and now i am sure they will not release aside all another company release on regular basis. if you buy this mobile you will get kitkat 4.4. this is updated version but as soon as new software version will come in market you have to use kitkat 4.4 only so you will be outdated and micromax is not such company who can upgrade to their customer to latest one.
@VIPUL THAKUR • 10 Sep, 2014 micromax canvas knight and nitro both are faadu mobiles....i most like canvas nitro..
@Ankita Katdare • 10 Sep, 2014 Here's a specs comparison chart for Micromax Canvas Nitro Vs. Xiaomi Mi3 -
Which one do you think is better?

My quest for the best router in the market never ceases to end. I'm looking for the recommendations on what we'd typically call "the best long range wireless router". I'd...
6.9k views
Read More →
Archives

Oppo India has recently revealed the Oppo F3S Smartphone in a press meet on Thursday. The device comes with the much rumored dual selfie camera and also plays host to...
5.6k views
Read More →
Archives

What will be the output of this program ?

How to extract audio from video in java

I actually want to extract one audio file from a video file and then convert that audio file into text in further stage after which that text would be saved...
11.6k views
Read More →
Channels
👨‍💻 Remote Jobs 🗞️ News 🚀 Founders Circuit 🗄️ Archives ✨ Newsletter 🕹️ Changelog
About · Privacy · Terms of Service · Contact Us · © 2005 - 2022 CrazyEngineers. All rights reserved.