@Ankita Katdare • 18 Aug, 2013
Maruti Suzuki India Ltd, the country's largest passenger car manufacturer, never fails to amaze us. The last time we wrote about them it was about Maruti Ertiga CNG that help Indian car-owners beat rising fuel prices and the Maruti Suzuki app for car servicing. This time around, the automobile industry is getting a new entrant. With the upcoming launch of Maruti Suzuki Wagon R Stingray hatchback rumored to be around end of August this year or during the festive season as sales for passenger cars normally see a substantial increase at that time, there's much excitement among the folks who love unveiling of cars.

We all are aware of the fact that Maruti Suzuki's Wagon R has been popular on the Indian roads and it still sells on an average 13000 units per month. So, the all new Wagon R Stingray is among a lot of speculations about the features that it is going to sport. There was also news about the hatchback being spotted in a photography session and a demo version of the new car was seen at a Maruti Suzuki dealership. What took to everyone's attention was the huge Experience Stingray logo on a new chrome strip. The overall sporty look and feel of the Suzuki Wagon R Stingray has a bold front fascia that makes it look more masculine. 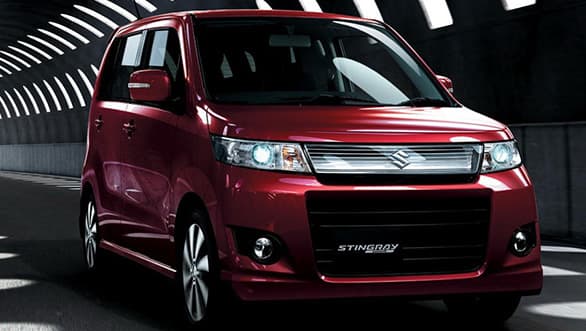 ​
Much is being written about the new Wagon R and its features - such as it features a bonnet with a large dam, slim headlamps, revised fog lamp clusters and a slim chrome grille. Running on four grey-finish alloy wheels, new rear spoiler and sleek tail lamps, the car has a kind of aggressive look that's just out there. Coming to the interiors, we are reading about black upholstery, high quality floor mats, an advanced audio system, electronically adjustable optical rear view mirrors, projector headlights, Anti-lock Braking System (ABS) and airbags.

The Maruti Suzuki Wagon R Stingray specifications may resemble mostly with the current Wagon R running on the roads. Therefore, we might see three-cylinder K Series 1-litre petrol engine that will be mated to a 5-speed manual gearbox. Though there's no official word about the price or the availability of this new car, according to reports, the hatchback's price in India could be around Rs. 4.10 lakh. So are the recently launched Nissan Micra and Micra-Active 2013 as well as Hyundai Grand i10, the competitors to the Wagon R Stingray? We will find out in due time. Let us know your views about the upcoming hatchback in the Indian car market through comments below.

Update: The car is going to feature tilt-adjustable steering wheel and electrically adjustable rear view mirrors. The KB 10B 1-litre engine produces 68PS of power and 90Nm of torque. Top-spec Vxi (O) gets driver-side airbag and ABS. A fuel economy figure of 20.51 kmpl for the Wagon R Stingray is being claimed.
@Sarathkumar Chandrasekaran • 18 Aug, 2013 looks are stunning beating the odds of old wagonR.Three cylinder engine makes it to move like a cruser.
5speed manual geaebox makes the transmission done with ease.
@Nayan Goenka • 18 Aug, 2013

Ankita Katdare
according to reports, the hatchback's price in India could be around Rs. 4.10 lakh. So are the recently launched Nissan Micra and Micra-Active 2013 as well as Hyundai Grand i10, the competitors to the Wagon R Stingray?

If this comes at this cost ex-showroom, it will be around 440k on road which brings it smoothly in lower-middle class consumer ship whereas I don't think Nissan or Hyundai would enter that place. Their maintenance cost is higher.
@zaveri • 19 Aug, 2013 looks like this creature was made to compete in the SUV segment.
@Ankita Katdare • 20 Aug, 2013 It has been made official that the launch date of Maruti Wagon R stingray is August 21. Check out the teaser video put up by the company -


@Ankita Katdare • 21 Aug, 2013 "The launch of Stingray is in line with our strategy to provide new and refurbished models to our customers to create excitement in the market place. Indian auto industry has been going through a slowdown, but despite this customers continue to buy Maruti cars," MSI Managing Director and CEO Kenichi Ayukawa told reporters here. The company is going to try to sell this car this festive season. Will it work? Will we see a lot of Wagon R Stingrays on Indian roads? What are your opinions CEans?
@Nayan Goenka • 21 Aug, 2013 Is the product launched already? Well it completely depends on the costing they release for the car finally. That will determine its on-road cost and ultimate impact on the buyers. For the first-second year professionals or graduates, this is a good pick but still depends on the cost.
@Ankita Katdare • 21 Aug, 2013 The model is being offered in a total of 3 variants - LXi, VXi and VXi with an Option Pack.

2013 Maruti Suzuki Stingray LXi - Rs 4.09 lakh
2013 Maruti Suzuki Stingray VXi - Rs 4.37 lakh
2013 Maruti Suzuki Stingray VXi (O) - Rs 4.66 lakh
@Sarathkumar Chandrasekaran • 21 Aug, 2013 So this is what we expect from Indian Automobile giants that it provide more safety to customers who drive it with Airbag,ABS,fog lamp,etc.Power could be more but provided the efficiency of maruti We accept that low power output.
To compete Micra,i10 Maruti must produce some powerful monsters also.
@Anoop Mathew • 21 Aug, 2013 What I feel is that Maruti could have tweaked this baby up a little more. All of Maruti's cars are superb modifiable ones, but I feel that Maruti should try to take the credit for bringing the monster up for itself. If you look at almost all variants of Maruti that is owned by youngsters - you'd find that most of them would have added larger and thicker wheels and sexier spoilers, and most people love to give that extra punch of power to the overall revving of the engine. In Kerala, Pete's is very famous for their imported parts and mods. Why shouldn't Maruti exploit this market with their own products when about 90% of Indians use Maruti automobiles daily???
@Nayan Goenka • 22 Aug, 2013

anoopthefriend
Why shouldn't Maruti exploit this market with their own products when about 90% of Indians use Maruti automobiles daily???

I think the number of people you are speculating MS users are too high. Plus not all of them do modifications in cars. And modifying the car voids its guaranty I believe so making more and more models just for the sake of some mods is not feasible I think. What they can do is offer an extra paid addon system.
@Anoop Mathew • 22 Aug, 2013

Nayan Goenka
And modifying the car voids its guaranty I believe so making more and more models just for the sake of some mods is not feasible I think. What they can do is offer an extra paid addon system.

Exactly what I was vouching for pal! Stingray could have had those mods. Most youngsters prefer modding - so why not give them Maruti's own version of parts is all I'm saying.
@Sarathkumar Chandrasekaran • 27 Aug, 2013 Chennai on road prices today shared in motor vikatan:
LXi - Rs 4.97 lakh்
VXi - Rs 5.24 lakh்
VXi(O) - Rs 5.53 Lakh்
These are confirmed prices of new maruti stingray in chennai.
@Ankita Katdare Do prices vary this much from state to state?elaborate the reasons other than taxation.
@Nayan Goenka • 27 Aug, 2013 That's it. They just missed their head start of low rates to gain on the market. Now they are again in the same category of mid range cars. We needed cheap ones. 5.5 lacs is too high difference compared to 4 lacs
10.7k views

What should i prepare for placement?

Please suggest from your experience. These days i am preparing for the placements. Should i do quant question also.? what should i prepare for Tech Interview , i am from...
4.3k views
Read More →
Archives

Hi people, Can you please suggest some good institutes in Pune for short term(3-4 months) VLSI/Embedded Systems course? People from Pune please help in this regard. It would be appreciated.
13.8k views
Read More →
Archives

Born and raised in Mumbai, Satej Sirur was brought up by parents who were both bankers. In his growing up years, Satej had to move around quite a bit. While...
4.9k views
Read More →
Archives

Why PAN Card Details required before an interview ?

Recently i got an interview call from a reputed MNC. Along with my Bio-data they are asking for my PAN Card details. My question is, why they required PAN details...
21.8k views
Read More →
Archives

Chile's president couldn't have been wrong with his decision to appoint Er. Andre Sougarret on the mission of rescuing the miners stuck deep in a gold mine in Chile, before...
4.4k views
Read More →
Channels
👨‍💻 Remote Jobs 🗞️ News 🚀 Founders Circuit 🗄️ Archives ✨ Newsletter 🕹️ Changelog
About · Privacy · Terms of Service · Contact Us · © 2005 - 2022 CrazyEngineers. All rights reserved.