@Ankita Katdare • 31 Jul, 2015 • 2 likes
India's own automobile manufacturing company - Mahindra & Mahindra Ltd. has announced the launched of its next power vehicle called Mahindra TUV300. Touted for unveiling in Mid-September 2015, the TUV 300 has just received its own brand new micro-site that features a teaser video, some of the car's sketches and details about the TUV's design inspiration. The company is calling this vehicle the toughest looking SUV in India. This is owed to the fact that the car's design has been inspired by none other than a battle tank. With an aim to give their SUV a commanding presence on the road and for it to become a definition of toughness and strength, the Mahindra TUV300 has been designed to look like a battle tank that not only survives on difficult terrains, but looks up-to-the-mark for the job.

From the sketches that have appeared on the Mahindra TUV300 website, we see that the SUV is set to feature a flat roof, a straight bonnet, high front nose and raised shoulders. High ground clearance comes without saying and the iconic true blue SUV silhouette is there to stand out. The company has also shared that the Mahindra TUV300 specs will see an advanced mHawK engine. 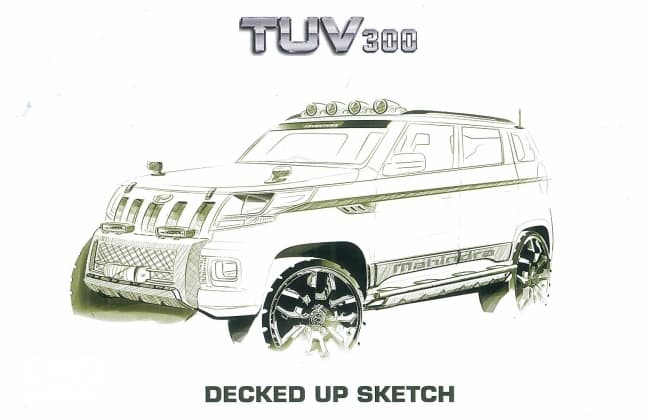 ​
Though we don't know any thing about the SUV's specifications yet, the company has announced that the TUV300 will be exported to other countries and so international safety standards should be on the cards.

Speaking about the logo and the new name, the company officials shared that the name TUV300 will be pronounced as "3 double O" to keep up to its tradition of having vehicle names ending with an O. For instance, there's Mahindra Quanto, Verito, Xylo, Scorpio or Bolero.

Apart from that, we know that the Mahindra TUV300 will be manufactured at the company's Chakan facility in Maharashtra.

The powerful SUV is supposed to compete with the likes of Fiat Avventura, Hyundai 120 Active and Toyota Etios Cross which are all priced below Rs. 10L.

What are your thoughts about the brand new SUV from Mahindra & Mahindra group? Take a look at the teaser video and share your thoughts with us in comments below.
​
​
Source: Mahindra TUV300​
@vishal Lokhande • 01 Aug, 2015 • 1 like That is really exciting news from M&M😁.....after succession of XUV500 n Face-lift Scorpio people expecting more promising product form Mahindra and no doubt company manage to fulfill his promise .
👍
@Ankita Katdare • 01 Aug, 2015 @Vishal_lokhande I agree. What do you think about the battle tank design and the overall looks of the TUV300 from the sketch and the tease video? Also, any guesses about the pricing?
@vishal Lokhande • 01 Aug, 2015 • 1 like @Ankita Katdare The battle tank design looks aggressive and muscular. Now a days the design team at Mahindra experimenting lots of out of box thinking and a result we have this battle tank on road 👍, I am exciting for actual launch bcoz sometimes actual design varies form sketch😀 .Also its a sub 4 meter SUV which is an advantage for excise duty and they offer both Petrol & Diesel opt so the price may vary form 7.5lac to 11.5lac
@vishal Lokhande • 10 Aug, 2015 More details regarding TUV300 https://www.cartoq.com/mahindra-tuv300-compact-suv-caught-almost-undisguised/ 😁
@Ankita Katdare • 15 Aug, 2015 • 1 like According to a latest update, Mahindra is all set for the would launch of Mahindra TUV300, its all new utility vehicle, on September 10, 2015 from its state-of-the-art automotive plant in Chakan, Maharashtra. 👍👍
@vishal Lokhande • 15 Aug, 2015

Ankita Katdare
According to a latest update, Mahindra is all set for the would launch of Mahindra TUV300, its all new utility vehicle, on September 10, 2015 from its state-of-the-art automotive plant in Chakan, Maharashtra. 👍👍

Thank you Ankita , I got it. Waiting for hands on experience for TUV300 . If possible share experience soon.