@Ankita Katdare • 26 Aug, 2014 • 3 likes
Mahindra & Mahindra motorcycles segment has got a new stylish addition today with the launch of its Mahindra Centuro Rockstar, a 110cc bike priced at (ex-showroom) Rs. 43,700. The two variants N1 and O1 have a price difference of mere Rs. 3000. In the looks department, the Rockstar might appeal the bold statement lovers owing to the fact that the design has heavy use of bright red, black and gold colors. Sporting a single cylinder 4-stroke air-cooled MCI-5 engine inside a double cradle, tubular structure frame, the Centuro Rockstar delivers a max power of 8.5 PS @ 7500 RPM (6.25KW) and a maximum torque of 8.5 NM @ 5500 RPM. Let us take a look at the basic tech specs sheet to find out more about the new rockstar bike.

The new 2014 Centure features 5-step adjustable, coiled spring, hydraulic front and rear suspension and front/rear 130 MM drum brakes. The company promises an ARAI certified mileage of 85.4 kmpl, which it credits to the MCI-5 technology and patented lubricated system. The company boasts of an extra long seat, alloy wheels and a handle bar mounted self-returning choke (ensuring that the cold starts are easy peasy). The bikes overal weight is 120 kg, a 173 mm ground clearance and has a Fuel Tank capacity of 12.7 lites. The 12 V halogen headlamp is 35W/35W in power and the tail lamp is a LED. 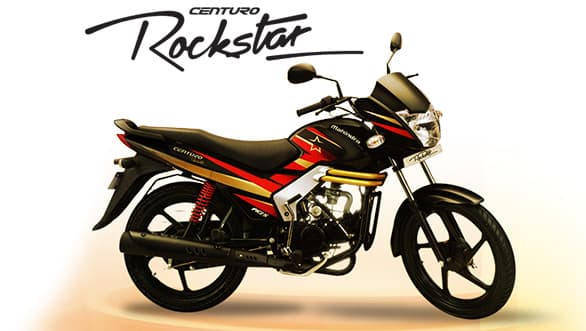 ​
That's all about the bike's technical specifications. The Centuro has bagged many prestigious awards including - Auto Car India Viewers' Choice Bike of the Year and Zigwheels' 'Commuter Bike of the year'. It was only this month that, Mahindra launched Rodeo UZO 125 at a price of Rs. 47,957. That bike features a 125cc engine and delivers 8.04 bhp (6 KW) power and 9 Nm of torque, coupled to continuously-varying transmission (CVT), while promising a 59 kmpl mileage.

What are your thoughts on the all new Mahindra Centure Rockstar bike? Share with us in comments below.
@Divyaprakash KC • 26 Aug, 2014 • 1 like Sigh, Mahindra.

Divyaprakash
Why not give us a tough tourer ? 375cc, low rpm, high stability

That's not bike, that is called Royal Enfield. ☕

Mahindra is picking up in four wheeler and heavy vehicle. They need to come with some 125 cc which should be capable to kill discover and splendor. I don't *think adding looks and electronics feature is attractive to potential buyers.
@Ankita Katdare • 26 Aug, 2014 Heard really great reviews about the Centuro bike from friends, even though the fact is that the Hero and Honda competition is quite stiff in this segment. Is an on-road mileage of 60 kmpl an expectation from this one? 👀
@Divyaprakash KC • 26 Aug, 2014

Anoop Kumar
That's not bike, that is called Royal Enfield. ☕

That is what pains mee too. Not giving up on RE as a legendary bike, I think it it is time for us to have a better alternative ( something like old Yezdi or Jawa). IMO, Mahindra could do this as they have the engineering strength.
@Sarathkumar Chandrasekaran • 26 Aug, 2014 • 1 like Mahindra definitely making some strong waves and especially in right direction. I am pretty confident that it will make decent sales. There are times where people only choosed Hero and Honda but this generation is brave enough to test new entries that looks promising. Mahindra is surely "Rising"
@Bella Edward • 17 Dec, 2014 Its pretty good bike in low budget for india. the features are very new and good. the anti theft feature is great. The pricing is quite good.
@Rachana S • 19 Jan, 2015 Have read quite great reviews about this bike online and my neighbour who owns this bike also says it is very good. My brother has been looking to buy a good bike. Will probably ask him to go test drive this bike. The best part is that fits right in my budget.
@WAPANG • 18 Mar, 2015 • 1 like Centuro is definitely one of the best bikes in the segment. I bought this a few months backI really like it. Since my work place is quite far off i end up traveling more than 40kms everyday and this bikes makes commute affordable and very comfortable.
@vineetn154 • 14 May, 2015 Best bike by Mahindra.. I have been riding it for 6 months and i really like the bike. I have not faced any issue with it since i bought it.. Features are also good.
@vineetn154 • 27 May, 2015 I bought this bike more than a year ago. It is giving good mileage and the price isnt bad either. Good one from Mahindra!
@anil_links • 01 Oct, 2015 The bike is truly the rockstar of the road. I love the looks I get when I ride the Rockstar.