Satya Swaroop Dash · Feb 22, 2016
Rank A3 - PRO
LG has unveiled its most ambitious smartphone yet at the Mobile World Congress 2016. The LG G5 is not just another flagship smartphone but a real technical innovation due to its modular design. Apart from the rumoured Slide-out Battery, the LG G5 comes with a ton of other compatible accessories called LG Friends that can enhance the LG G5 in any way you want. If you want a better camera on the LG G5, you can slide in LG CAM Plus camera module that can be attached through the battery slot and comes with physical buttons for a natural camera experience. If you want a 360 degree camera on your G5 then use the LG 360 CAM which comes with two 13MP 200-degree wide angle cameras, 1,200mAh battery and 4GB internal memory plus microSD card slot to take any number of 360 photos you want. If you desire better audio on your LG G5 you can go for the LG Hi-Fi Plus which is a portable Hi-Fi DAC audio player to be used with your LG G5 or any other smartphone or PC. There is also an option for a nanny cam called the LG Rolling Bot and a VR headset to go with your LG G5. 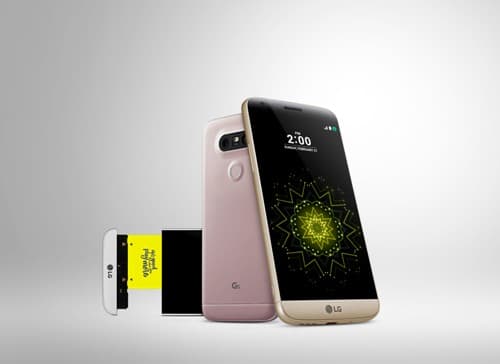 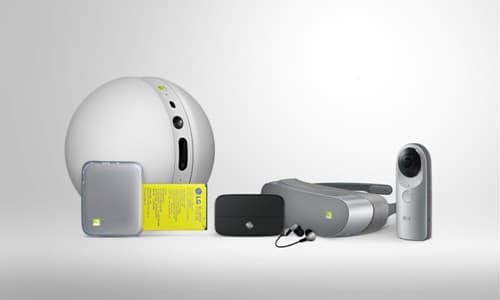 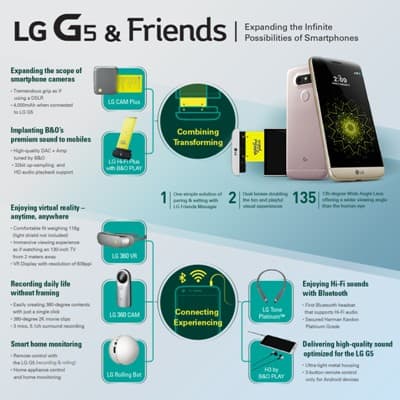 ​
The LG G5 as a smartphone isn’t a slouch but a portable powerhouse. The LG G5 sports a 5.3-inch Quad HD (2560x1440 pixels) IPS panel display with pixels per inch figure of 554. LG has put in a clever always-on display making a part of the screen always-on so that you can check notifications and the time without unlocking the smartphone. Underneath the hood, we find a 2.2 GHz quad-core 64-bit Qualcomm Kryo processor, Adreno 530 GPU and 4GB LPDDR4 RAM entrusted with the task of running Android 6.0 (Marshmallow). While the internal memory of the LG G5 is a large 32GB one you can use microSD cards of up to 2TB to expand that storage. On the rear we find a dual camera setup, a standard 16MP one followed by a wide angle 8MP one with dual LED flash. On the front we get an 8MP camera for high quality selfies. The removable battery that we mentioned above is a 2800mAh one which is a smaller battery considering the firepower that it has to run but LG might have used it because people will be forced to buy another battery to complement the modular design. The LG G5 comes with all the latest connectivity options such as USB Type-C, NFC, Bluetooth 4.2 and Wi-Fi 802.11 a, b, g, n, ac.

Pricing and availability information will be available at a later date and we shall keep you updated. Posted in: #Gadgets
1 Like
@ A2A Reply