@Ankita Katdare • 13 May, 2015
Lenovo India is riding the high wave as it introduces its flagship smartphone called 'Lenovo A7000' in the country. Priced at Rs. 8999, this smartphone is truly a competitor to several other Android smartphones making raves in the country. Having Dual SIM support and running the latest version of Android i.e. Lollipop (5.0), the 7000 wants to beat the likes of Xiaomi Redmi Note and Asus Zenfone, the two phones that have been able to capture the nation's attention. Lenovo loves the idea of big screens and A7000 does not shy away from it either. It has a big 5.5 inch screen that has a HD resolution (1280 x 720 pixel) IPS display. The capacitive touchscreen gives way for 5-point multi touch and supports 16M colors. If you check out the company's official page listing the A7000, you will find the catchline 'Big Sound. Big Screen'. That comes from the fact that this is the world's first smartphone with the all-new Dolby Atmos for enhanced sound quality. Looks like audiophiles will want to check out this feature.

Coming to the Lenovo A7000 tech specs, here we have a phone running on an Octa Core processor (MediaTek MT6752m) clocked at 1.5GHz and an ARM Mali 760 MP2 graphics unit. At 7.99, the phone is bound to be pretty lightweight and sleek. Residing inside the phone is 2 GB RAM and 8 GB internal memory which can be extended up to 32 GB via microSD card. 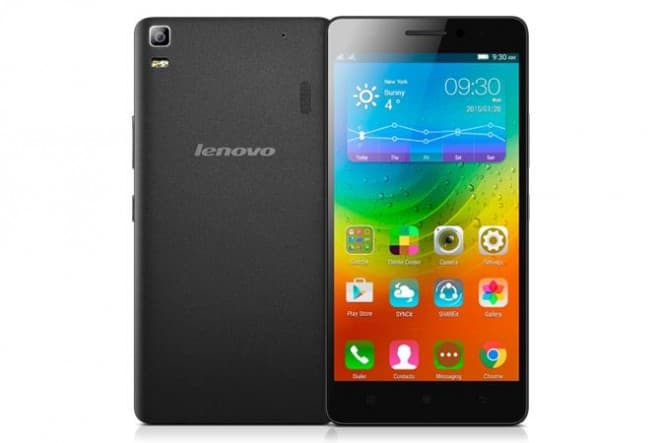 ​
A gigantic 2900 mAh battery that offers 16 hours of 3G talktime and up to 11 days of standby time. On the phone's rear end is an 8 megapixel camera that has auto focus and LED flash. On the front is a fixed focus 5 megapixel snapper. On the connectivity front, there's 2G, 3G, 4G, Bluetooth 4.0, A-GPS and of course Radio.

The Lenovo A7000 comes in two colors - Black and White. For the pricing it is offered at, we believe those are some really decent set of specifications and those looking to buy a new Android for themselves this year should definitely give it a shot.

What are your thoughts about Lenovo A7000? Share with us in comments below.

Source: Lenovo
@Harshad Italiya • 13 May, 2015 • 1 like I ordered one for my sister and it was simply superb ! It heats up when playing games but overall I like it so ordered one more yesterday.

Back cover is too weak they designed it low quality to make it lightweight.
@Ankita Katdare • 13 May, 2015 That's amazing! How is the display quality and overall touchscreen performance? Any inputs on this front will be useful for future buyers.
@Harshad Italiya • 15 May, 2015 • 1 like Display quality - 5/5
Touchscreen performance - 5/5
Camera quality - 3.5/5
2.8k views

It is amazing to see the pace of research happening in the field of batteries and chargers. Given that 'going compact' is our anthem and cellphones or handhelds the present...
2k views
Read More →
Archives

A new software called 'idTRACKER' has been developed by a team of researchers from Cajal Institute, a neuroscience research center assigned to the Spanish Research Council (CSIC). Based on some...
2k views
Read More →
Archives

Few days back, I switched to latest Elementary OS Luna, elegant-beautiful-most stable distro I've ever used after Linux mint. I am seriously in love with this distro, even though it...
4.2k views
Read More →
Archives

hello, I'm a TE mechanical student I need to do a mini project immediately as possible as. and i don't have any idea about how to do it. so will...
3.4k views
Read More →
Archives

Smarty Ring, a project out of India, is the new wearable gadget in the tech town. Remember the time when you are frantically searching for your smartphone in the purse...
1.8k views
Read More →
Channels
👨‍💻 Remote Jobs 🗞️ News 🚀 Founders Circuit 🗄️ Archives ✨ Newsletter 🕹️ Changelog
About · Privacy · Terms of Service · Contact Us · © 2005 - 2022 CrazyEngineers. All rights reserved.