@Chirayu Samarth • 23 Feb, 2015
The Indian mobile manufacturer, Karbonn has launched a new affordable smartphone- Karbonn S15. However, the company has neither announced the smartphone officially nor it has listed the device on its website. The phone was first spotted by Fonearena and is priced at INR 3,830. The handset comes in black and white color variants and is available exclusively through Indiatimes Shopping. 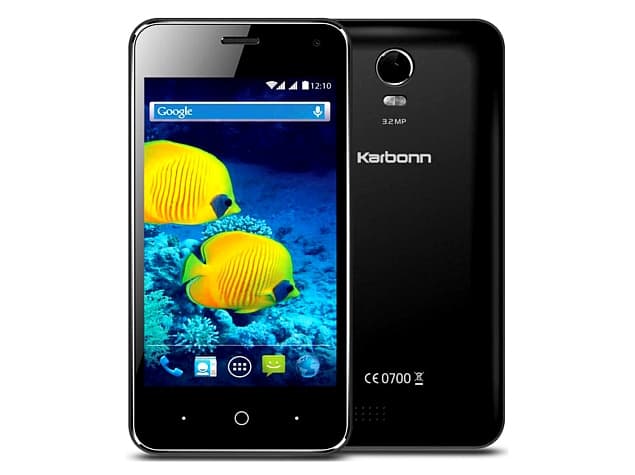 ​
As far as the specifications are considered, the phone flaunts a 4-inch WVGA (480x840 pixels) display, and runs on Android 4.4 KitKat. It is powered by a 1.2GHz quad-core processor paired with 512MB of RAM and 4GB of inbuilt storage, which is further expandable up to 32GB via microSD card. The dual-SIM (GSM+GSM) device sports a 3.2-megapixel rear camera with LED flash and a secondary 0.3-megapixel front-facing camera. Connectivity options include 3G, GPRS/ EDGE, Wi-Fi 802.11 b/g/n, FM radio, Micro-USB, and Bluetooth options. It packs a 1500mAh battery with no word on talk time and standby time. Further, it also supports DTS surround sound audio technology.

Looking at the specs and price, this new affordable smartphone will compete with smartphones like Lava Iris 465, Spice Stellar 431 and many more entry-level handsets being continuously launched in the Indian market. Let us know your views on this new smartphone from Karbonn. Share with us in comments.

This year has been great for Celkon. With frequent launches of its new smartphones, the Indian mobile manufacturere has been a part of the news headlines for multiple times over...
1.7k views
Read More →
Archives

Why 3G network consumes more data Than a 2G network?

This question may look bad but I want to know the reason behind it.I tried to connect the net using teathering and when i use the 2G network and open...
3.2k views
Read More →
Archives

Samsung India has added a new gadget to its range of Galaxy smartphones with Samsung Galaxy Mega 6.3. Those of you who would think bigger is better and aren't satisfied...
2.2k views
Read More →
Archives

"A European OR An European" - Correct English Usage?

A European or An European? What is the correct English usage? I think there'd be a lot of confusion over this. After searching a bit online, I found out that...
4.5k views
Read More →
Archives