@Ankita Katdare • 28 Aug, 2013 • 3 likes
At a time in which public consciousness and concern about their security across the Internet is at its peak, a developer from UK - Robb Lewis and designer Ed Poole came together to develop a website that helps you get off the grid. Well, not completely, but they have launched a website called JustDelete.Me for people who want delete their web trace from various online databases, be it a social media site to an online retailer site you so regularly visit. The website gives its users a directory of URLs highlighting links to pages that they want to remove themselves from.

After it went live on August 19, within a week it received 5,00,000 views - which pretty much speaks of the instant success of the idea and how much more alert and active the netizens have become when it comes to their data on the web. Ed Poole believes that the reason behind the site getting so many views can be attributed to the recent controversy over security and privacy stemming out of the NSA leaks. JustDelete.Me currently lists sites like Facebook, Foursquare, Dropbox, Feedly, 9GAG, Amazon, About.ME, CodeAcademy, Disqus, Flickr, GitHub, NYTimes and Wordpress - to name a few. These sites are being ranked as per their level of difficulty in deleting accounts. It categorizes each service into “easy,” “medium,” “hard,” and “impossible”. 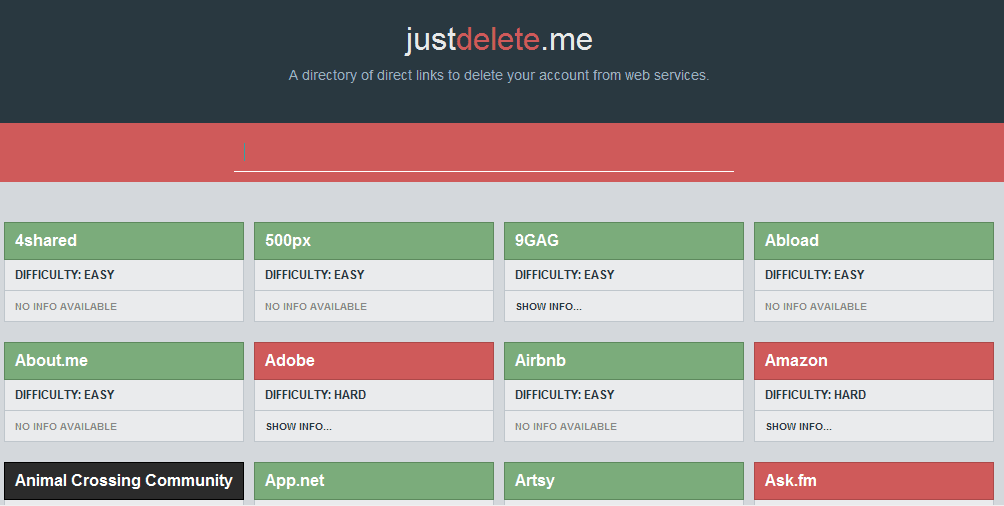 In a post on his blog, Lewis says he came up with the idea for JustDelete.me after seeing tweets on how difficult it is to delete a Skype or Netflix account. "Five years ago, when things like Facebook and MySpace were still in their infancy, people didn’t see the harm in sharing their personal information," said Poole in an email to Digital Trends. "Recently, with the drama surrounding the NSA and stories of large companies selling personal information, I think the public has realized we can’t just put anything online, as nobody really knows what information is ‘safe’ anymore."

What do you guys think about your online privacy and sharing personal data online. Would you be using JustDelete.Me? Share your thoughts with us in comments.
@Sarathkumar Chandrasekaran • 28 Aug, 2013 Definitely got to try it.Social networking sites are the best places to get robbed(Your datas,photos,videos,etc)Now just delete me makes a good way in providing secure feeling to users.can users delete complete data's uploaded by them if they had deactivated a account?
@Pensu • 28 Aug, 2013 Wow! That's a great initiative. It's a heaven for people who are concerned about online data security. It's good to know if I can delete my data from a account or not.