@Ankita Katdare • 18 May, 2014
Jaguar, the British multinational car manufacturer, has now taken the wraps off its upcoming sports sedan - Jaguar XE. We were excited in March to know about the car's basic features and a preview of what it will look like when the company announced the name XE at the 2014 Geneva Motor Show. Now, just as the Jaguar XE is set to be unveiled globally at the Paris Motor Show, a new image has appeared that shows the car's production shape. Banking on the sedan's advanced lightweight construction, the Jaguar XE developers boasts off the car's chassis made fro pressed aluminium sheets and castings joined with rivets and aerospace adhesives. Jaguar officials believe this will be considered as the car's highest USP.

Jaguar designers and engineers have applied the philosophy “anything we can imagine, we can create” to the new Jaguar XE will be powered by the premium 'Ingenium' range of 2.0-litre, four-cylinder engine, which is by far the company's most advanced (low-friction, low-emission and lightweight) engine. The Jaguar XE will be able to travel at over 186mph (299 kmph) speeds with lesser CO2 emissions of 100g/km on certain models. The company has also shared that high performance versions of the engine which produce about 400bhp are also on the cards. 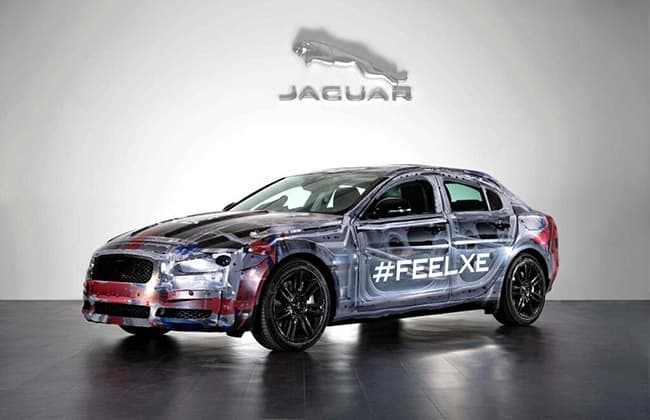 ​
Hoping to make the car premium as well as practical, the company will ensure that Jaguar XE goes on sale globally around mid 2015. The car will thus be available in India around the same time, where it may find its rivals in the existing sedan models such as Audi A4, Mercedes-Benz C-Class and BMW 3-series. Tata - the parent company for Jaguar, might expect to generate volumes in sales once this particular model is launched here. Till we get our hands on more details, you can check out the preview video from Jaguar about the XE -


​
Some of the experts speculate that the Jaguar XE will be priced at a starting price of £29,000 (approx. Rs. 23 L in India), but we should wait for an official word from the company. What are your thoughts on the new ravishing sedan in action? Share with us in comments.

​
Source: Autocar UK
@Rajni Jain • 18 May, 2014 If sources are to be believed then in the price range of <25 Lakh INR Jaguar XE may rule the market as BMW, Audi and Mercedes are much costlier then this.

Jaguar already has a brand name as premium car, The new Ingenium Engine and Aluminium-intensive architecture of the car makes it uniquely lightweight and should definitely force consumers to look for the car.
@Sarathkumar Chandrasekaran • 18 May, 2014 Yep.I completely agree to Rajni .
With this attractive price tag(if priced as same during launch), people May overlook on Jaguar over other luxury counterparts .With its high strength adhesive fixed aluminium cover make it even cool.
9.3k views

Motorola X To Roll Out 'Within Weeks' In India

Inspired by the tremendous success Moto G tasted in India, Motorola tweeted that it would roll out its flagship Moto X within few weeks in India and Australia. It seems...
6.2k views
Read More →
Archives

Collection of programming questions in java....?

hello friend's, I think during exam time we all need the collection of the questions that cover all the topics of the programming language. Not only during exam time it...
9.4k views
Read More →
Archives

What Is The Difference B/w Regulator And Stabilizer

What Is The Difference B/w Regulator And Stabilizer??
4.6k views
Read More →
Archives

So, everyone who took CDAC's common admission test C-CAT on 6th and 13th December 2015 have received the C-CAT Ranks on 29th December. All those who are applying online for...
5.5k views
Read More →
Archives

Was wondering why laptop manufacturers don't offer 4G or 3G connectivity built right into the machine itself. These days, most of the laptops have to rely on external dongles or...
9k views
Read More →
Channels
👨‍💻 Remote Jobs 🗞️ News 🚀 Founders Circuit 🗄️ Archives ✨ Newsletter 🕹️ Changelog
About · Privacy · Terms of Service · Contact Us · © 2005 - 2022 CrazyEngineers. All rights reserved.