@Ankita Katdare • 02 Jan, 2014 • 2 likes
With Intex Aqua Octa, Intex Technologies has kept its promise in bringing a smartphone with MediaTek MT6592 Octa core processor in India during the first week of January. The new phablet cum smartphone - Intex Aqua Octa features MediaTek's world's first true Octa-core mobile platform. The MT6592 SoC was introduced in November 2013 and has been popular ever since for having the eight CPU cores, each capable of clock speeds up to 2GHz, built on advanced 28nm HPM high-performance process. Thanks to the MediaTek scheduling algorithm, the process brings optimum temperature monitoring temperature and power consumption every single time it runs. The MediaTek MT6592 features a quad-core graphics engine, an advance video playback system supporting Ultra-HD 4Kx2K H.264 video playback and support for new video codecs such as H.265 and VP9, a 16-megapixel camera and a Full HD display.
All that power comes to Intex Aqua Octa through the 1.7 GHz processor.

Coming to the Aqua Octa specifications, we have a phone featuring 6-inch IPS display with 1280x720 pixel resolution running Android 4.2 Jelly Bean operating system. With Dual SIM (3G+2G) support, Intex Aqua Octa packs inside it a 2300 mAh battery that promises six hours of talk time and 180 hours of standby. On the rear end of the phone, you will find a 13 megapixel camera with LED Flash, while on the front side, there's a 5 megapixel snapper for making video calls back home or taking selfies. The phone as such gives a high resolution video playability and support various video formats such as 3GPP, 3GP, MP4 and AVI and can play 60 FPS video files. The phone extends support for FM Radio and gets a 3.5 mm audio jack for your earphones and speakers. All this is under a body that weighs just 180 grams. Last but not the least are the connectivity features - These include: 3G, Wi-Fi b/g/n, Bluetooth and AGPS. 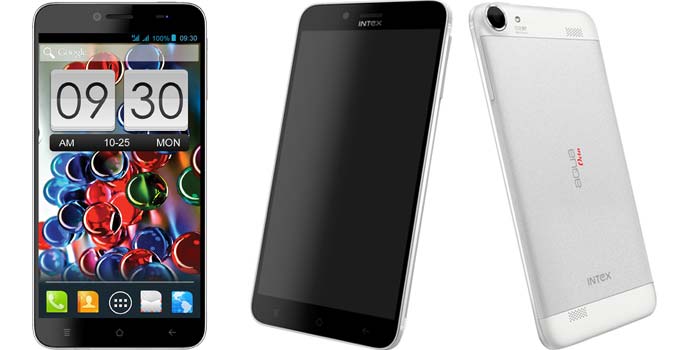 ​
The phone comes with a 16GB internal memory and 2 GB RAM. Speaking about the launch, Sanjay Kumar Kalirona, Business Head – Mobile, Intex Technologies (I) Ltd. said, "The launch of ‘Aqua Octa’ reinforces our brand’s promise to bring premium smart devices at the leading edge of technology, to improve the quality of life of people at large. With the True Octa Core processor, Intex achieves another industry first by bringing the fastest 6-inch Android smartphone ever for the technically savvy customer. The incredibly responsive touch screen and innovative user interface adds that 'plus one' that our customers have come to expect from every Intex device."

Coming to the availability details - the Intex Aqua Octa which is available in white and black colors, will be available across 40,000 plus retail outlets, more than 42 INTEX SQUARES (exclusive retail stores), several hypermarkets and other leading e-commerce portals from January 15. At first, the Intex Aqua Octa showed up on the official website and Snapdeal started selling it an official price in India tag of Rs 20,000. How do you like the features, tech specs and price of the all new smartphone Intex Aqua Octa? Share with us your thoughts in comments below.
4.6k views

HCL Technologies is currently developing one of its major development centers in Nagpur at MIHAN. HCL's executives has confirmed that they'll be recruiting about 2000 engineers - half of which...
5.4k views
Read More →
Archives

GSM and GPS interface with Arduino

i want any one to help me in my project . my project is to take infromatiom from gps module and send this information by gsm module to no. and...
4k views
Read More →
Archives

Indian phone brand Micromax has unveiled the all new Micromax Canvas Silver 5. Priced at Rs. 17,999, the phone is claiming to be the world's thinnest and lightest phone ever!...
18.2k views
Read More →
Archives

Hello mates, I was actually trying to find a project based on Microwave engineering as a part of my course work. And I have no clue where I could find...
4.2k views
Read More →
Archives

To all the engineers from India and around the world, we wish you a very happy engineers day! Every year, September 15th is celebrated as engineers day all over India...
6k views
Read More →
Channels
👨‍💻 Remote Jobs 🗞️ News 🚀 Founders Circuit 🗄️ Archives ✨ Newsletter 🕹️ Changelog
About · Privacy · Terms of Service · Contact Us · © 2005 - 2022 CrazyEngineers. All rights reserved.