Intex Aqua i4+ Priced At Rs. 7600 In India Is The New Android This Year End

@Ankita Katdare • 27 Dec, 2013 • 1 like
After a series of smartphone launches in 2013, Intex Technologies - the Indian smartphone brand is looking to end the year with another one. Today, Intex has unveiled a new smartphone called the Intex Aqua i4+ in its Aqua range of phones. The Intex Aqua i4+ is the successor to the company's previous model Aqua i4. Intex Aqua i4+ is likely to face stiff competition from other budget phones from Xolo and Micromax among others. Let us take a look at the various features and tech specs of this smartphone.

Powered by a 1.2GHz dual-core processor, the Intex Aqua i4+ features Android 4.2 Jelly Bean operating system and a 5-inch IPS display with 480x854 pixels (FWVGA) resolution. The phone is a Dual-SIM one with GSM+GSM and dual standby support. On the storage front, the phone talks of 512MB of RAM, a 4GB inbuilt storage that can be expanded up to 32GB with the help of a microSD card. On the rear end of the camera, you will find an 8-megapixel autofocus camera with LED flash as well as a 1.3-megapixel front-facing one. On the Intex Aqua i4+ tech specs sheet, we find that the phone cum phablet packs a 2000mAh battery inside it. 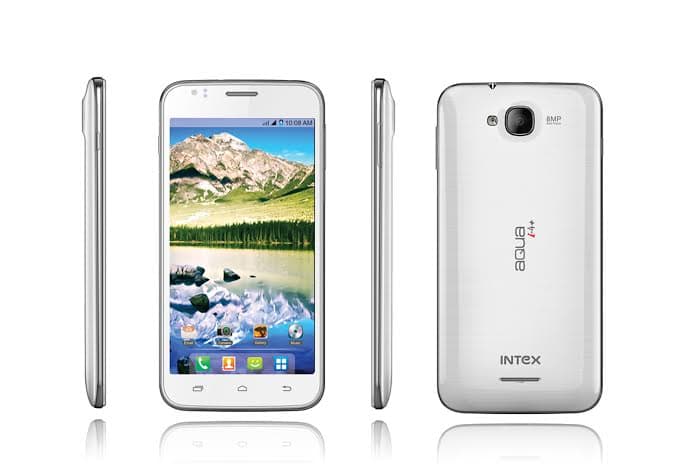 ​
Speaking about the launch, Sanjay Kumar Kalirona, Business Head- Mobile, Intex Technologies said, "Intex Aqua i4+ is yet another endeavour from Intex to meet the expectations of today's consumer in terms of design and performance. With its impressive specifications and features, Aqua i4+ promises to be a smart and powerful smartphone capable of providing smooth user-experience." Among the range of connectivity options that this phablet brings, there's Bluetooth, Wi-Fi, GPRS, EDGE, GPS/ AGPS and 3G. The Intex Aqua i4+ features a host of sensors that include motion sensor, light sensor and proximity sensor.

The predecessor of this phone i.e the - Intex Aqua i4 has tech specs that say - there's a 5 inch display with FWVGA resolution, a 1.2 GHz dual core processor and Android 4.2.2 Jelly Bean as the operating system. The phone sports an 8 megapixel rear camera with flash and 1.3 megapixel front facing camera and offers 3G, WiFi and Bluetooth 4.0 terms of connectivity options. The phone features a plethora of pre-loaded apps such as such as Matrabhasha, Intex life box, Intex Play and Hungama. Whereas the Intex Aqua i4+ phone features some pre-installed popular instant messaging apps such as WeChat and OLX along with 5 GB of free cloud storage through an Intex Cloud app. Available in Pearl Blue and Pearl White colors, Aqua i4+ will be available across 40,000 plus retail outlets, Inext Squares (exclusive retail stores), hypermarkets and e-commerce portals soon. The official price in India tag on the phone is Rs. 7,600. Among the range of Intex Aqua phones we covered, the prominent ones were Intex Aqua i4 and Aqua HD, then there was Intex Aqua N2 and Aqua i7 as well as the mid-budget Intex Aqua i6.

We think that for the price that it is offered at Intex Aqua i4+ could appeal to a lot of people. What do you think about the phone's features? Share with us in comments below.
@rohanrockxxx • 27 Dec, 2013 • 1 like this will be the last device they will produce i guess,as things will drastically change after moto g launches on 18th jab 😀
@Abhishek Rawal • 27 Dec, 2013 • 1 like I think Moto G won't drastically change anything.
The new era will rise only after Project Ara or Phonebloks will release their modulos & endoskeletons for users.
I am so eager to wait for that day, when normal smartphones will be replaced by endos & skeletons.
@rohanrockxxx • 27 Dec, 2013

Abhishek Rawal
I think Moto G won't drastically change anything.
The new era will rise only after Project Ara or Phonebloks will release their modulos & endoskeletons for users.
I am so eager to wait for that day, when normal smartphones will be replaced by endos & skeletons.

We were comparing 2 devices in the same price range bro 😀
Anyways Phoneblocks is under motorollas dev team,so yes we can expect something from them.
i am looking forward for the google glass 😀
@Abhishek Rawal • 27 Dec, 2013 MotoG which is priced US$179 is around INR 12000 (converted as per current rate), but I don't think Moto G will be anything less than INR 15,000.
Here, Intex offers it's device at range of INR 8000. I don't see how Moto G & Intex Aqua i4+ is in same price range.
@rohanrockxxx • 27 Dec, 2013

Price is not confirmed yet.i hope its around 10-12k.still a better option then buying intex for just 1 year working warranty(I DONT HAVE TO TALK ABOUT ITS AFTER-SALE SERVICE),with ics,cheap screen with a lagging processor 😔

xolo devices are better then Intex anytime compared in the cheap low budget range 😀
@rohanrockxxx • 27 Dec, 2013 not to forget the low ram,lol pathetic feature 😔
@Abhishek Rawal • 27 Dec, 2013 • 2 likes Let's wait for official announcement of Moto G price in India. But I am quite sure, that Indian market are so inclined towards Samsung,Apple,Nokia & Micromaxx that this awesome device will go unnoticed.

Moto is undoubtedly better than Intex, Xolo or anyother local Android devices, but i am talking about 'price' in this debate & I see no logic in comparing Aqua with G, since MotoG will not be under 15K. It'll be best deal if it will be priced under 15K, period!

What about Oppo devices in India ? I like CM more than Stock Android due to their awesome tweaks & features.
@Anil Jain • 28 Dec, 2013 All the low-medium budget phones like XOLO, Intex, micromax are releasing with dual sim and trying to lure consumers with big screen and heavy batteries. Do you think that this strategy is gonna work in any manner?

I personally believe that XOLO and intex are producing some better devices.

Here I second @Abhishek Rawal that indian market is heavily inclined towards Samsung, Nokia and now Micromax that any other device have to fight a lot to register the presence.

This could be debate able question.
Which local Indian company make better devices ? Xolo, Micromaxx, Intex or any other ?
Only the users of these devices can give better answer.
7.6k views

Hello friends, If you did not get proper placement in your colleges and want to get higher studies (preparation of GATE) or get Government jobs (like IES) and Public Sector...
9.8k views
Read More →
Archives

How to remove encryption utility?

We are having 250 GB Iomega external HDD which has an encryption utility which works only in windows and doesn't works in ubuntu or mac so we want to remove...
8.6k views
Read More →
Archives

Entry level segment in India is getting a brand new challenger with Renault Kwid making its grand appearance on the battlefield against the likes of Maruti Suzuki Ritz, Hyundai Eon,...
7.9k views
Read More →
Archives

DHOOM 3: Super MOTO Bikes: Can they be reality?