Ankit Mehta completed his B.Tech and M.Tech in Mechanical Engineering from IIT-Bombay in 2005. He has implemented several original ideas while at IIT and also led to the establishment of the roots of an Innovation Cell at IIT-Bombay. He also has a 6 months work experience at a leading sales and marketing consultancy.

Rahul Singh has completed his B.Tech in Mechanical Engineering and Ashish Bhat pursued B.Tech in Electrical Engineering - both again from IIT-Bombay. Amardeep Singh, a 2008 graduate from IIT Bombay, holds a dual degree in Aerospace Engineering. Whereas, Vipul Joshi has a MBA from University of Business and Finance, Switzerland.

In an exclusive interview with CrazyEngineers, Ankit talks about ideaForge, their team and experience of working in collaboration DRDO. He also shares his strengths, weaknesses and discusses about innovation and engineering. Read on!


From L to R - Ankit, Vipul, Ashish, Amardeep and Rahul.
​
1. Could you please tell our readers more about ideaForge? What inspired you to develop ideaForge?

Ankit: The company is in the business of Unmanned Systems (USs). It was founded by a team of IIT graduates, developing fully autonomous indigenous UAVs (Aerial USs) for surveillance, reconnaissance and imagery applications. Our products stream and record live aerial video on a ground control station. Our UAVs are being sold to defense, police forces and govt. agencies. We want to inspire the surge of Unmanned Systems and grab majority share in small UAV market of our country, where we currently are the only player to have made sales. We make the easiest to fly, longest in air UAV’s delivering the best video in their class globally. In 2009, we created the world’s smallest and lightest autopilot at 10gms along with the first indigenous small UAV.

ideaForge was started by bunch of IIT Bombay grads with the vision of giving wings to their ideas. Our team members individually and collectively participated and won in several Autonomous and other Robotics competitions, while studying at IIT Bombay. The founding team went on to represent India in ABU, ROBOCON’2005 in Beijing, China.

This passion for autonomous robotics did not go un-noticed and in the early days the company started receiving boot strapping projects in the form of creating UAV avionics from IIT Bombay, Aerospace Department. These initial projects and collaboration with IIT Bombay, led us to win MAV’2008 competition held jointly by Indian Army and DOD (USA) in AGRA for the best hovering platform. We shared the first prize with MIT, USA.

Our success in being able to make not just the avionics but also the capability to integrate the same with airframes, received a lot of accolades. We were pounded by a lot of inquiries from the Indian Defense Labs to assist them in creating micro and mini UAVs. Thus, we started our Unmanned Systems business due to overwhelming demand for our avionics and hovering platform from DRDO and Indian security agencies.

The inspiration to start ideaForge came from several internal motivations of the team such as the team itself. We firmly believed that it was winning team that had to work together from the word go to help us realize our dream of implementing our original ideas. We truly believed at that time that we will not be able to do justice to our energy and excitement for technology in any job or further studies opportunities that we had access to.

While working on several projects at IIT, we had broadly acknowledged the fact that we were able to get to 95% level in terms of technology implementation and performance, but that balance 5% that makes a technology a product was always missing. Repeatable performance of our technology/products in the hands of other people was a strong motivator for us to develop our skills in that category. Therefore, using our existing efforts in IIT we were keen on developing marketable products.

We felt truly privileged to have studied in an institute like IIT, where we learnt to open our thinking and experiment so much. There was a drive to deliver value in return to the society that had given us so much during our education in IIT.

There was also a brazen confidence that we wanted to choose the more difficult of the paths available to us, i.e. starting a hardware start-up in India and making it work for us.

2. How did the team (Rahul Singh, Ashish Bhat, Vipul Joshi, Amardeep Singh and you) come together? How important is working in a team for any startup?

Ankit:
The team came together while working on several projects in IIT Bombay. I got in touch with Ashish as I was looking for a team member who could solve our electronics blues while participating in a competition called ROBOCON. Rahul got in touch with me when he wanted use engines from the scrap bike and scooters left behind in IITB, to make a hovercraft. At that time I was heading the Innovation Cell at IITB. Amardeep was independently working on small UAV as a student and wanted to start his own company promoting the same, as there was a lot of synergy in what he wanted to do and what ideaForge was doing, we invited him to join our team. Vipul is a childhood friend of mine who remained in touch and joined us soon after finishing his MBA from Switzerland. Vipul was independently initially looking to start a e-waste management business, but upon detailed discussions with me and my team decided to come on board.


Working in a team with complimentary skill sets and roles is very critical. One man shows can only scale a business opportunity as much in my opinion, ones needs a team to be able to focus and grow the organization. The only reason ideaForge has been able to deliver some results is because of a good team.

3. ideaForge got technical support from DRDO and you have been working in collaboration since then. How fruitful has this been? How has it helped ideaForge?

Ankit:
Our association with DRDO has been very fruitful. It is a key reason for the success of our products in the market, due to the credibility that the association lends to our effort. It has helped ideaForge in gaining access to most of the UAV programs in the country. It has also helped us bootstrap our operations for several years now. 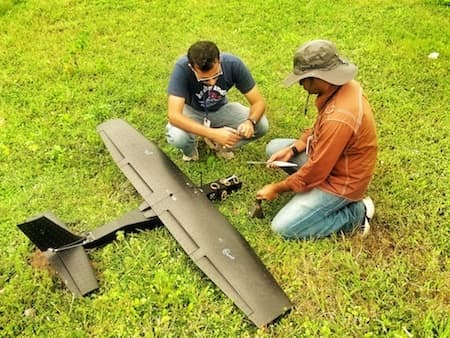 Ankit: The biggest strength of our team is the complimentary nature of our roles and each individuals competence in discharging it with efficacy. It frees everyone's time to focus on what they are very good at doing and thus ensuring that there are no gaps in the leadership for the organization as a whole. It also ensures that there are very little clashes between team members while they take decisions related to their fields.

The biggest weakness of the team can be at times when the individual stars tend to take their own direction on activities, thus sometimes diffusing the focus of the company and delaying results desired at a given time.

It is essential to keep the team and its activities focused towards the vision of the organization and having a culture and leadership to be able to guide it constantly towards a focused path.

5. What are the various products you've developed? Could you please tell our readers more about Netra? Is any product lined up in development phase?


​
We are working on developing UAV’s in several classes as they are defined by their size, endurance and range. We are also working on certain sub–system technologies that may revolutionize efficiencies of aerial platforms.

6. What is your vision at ideaForge? Is this your first business idea?

Ankit:
Our vision is to "Inspire the surge of Unmanned Systems"

This is not our first business idea, we started ideaForge by creating hand-cranked charging solutions for portable electronics.

7. How do you think your product can change the world? Do you believe that engineers and innovation can shape the world?

Ankit:
Our products will in the near and long term future revolutionize surveillance and reconnaissance in a manner that will enable our forces, commercial enterprises, etc to reduce their effort and spend on maintaining these activities. Our UAV's will become the leading change enablers in emergency response situations. They will also change the way material movement happens in the world.

8. What book would you recommend for every aspiring entrepreneur? What is your advice to engineers who want to become entrepreneurs?

Ankit: I would recommends all aspiring entrepreneurs to read Any Rand's novels Fountainhead and Atlas Shrugged.

My advice would be that do not take to entrepreneurship thinking that it is an in-vogue thing. Take to it only if you perceive in yourself that hunger to make a difference in a field and the perseverance to pull through the toughest times it may throw in path along the way. It is very important to start-up with the right fundamentals of having a great team, good idea and preparedness to do tons of hard work.
3.5k views

After launching the Coolpad Note 3 back in October 2015, the company has now come out with Coolpad Note 3 Lite for its Indian audience. And just like the Note...
5.8k views
Read More →
Archives

hello friend's Really it's nice to see that one of your friend comment on your post and automatically a red color notification will displayed on the header. . After concentrating...
3.3k views
Read More →
Archives

While placing order on Flipkart, I noticed that Flipkart no longer uses CCAveneue - one of the most preferred payment gateways in India (it allows transactions in Indian Rupees). However,...
3.3k views
Read More →
Archives