@Chaitanya Kukde • 05 Sep, 2014 • 2 likes
Moving fast in an attempt to catch up with the tablet-specialist ARM processors, Intel has launched the first of the Core M (codenamed Broadwell-Y) range of processors. This announcement came at the IFA event in Berlin, a show for consumer electronics and home appliances. Along with this, a host of devices featuring the Core M processor were also announced at the IFA. This range of processors is tailor-made for 2 in 1 devices, i.e. the devices which combine a tablet and a laptop.

Hoping that this processor will be the first of a family of processors that will transform the way mobile computing devices operate, Intel tested the processor against the processor of an average 4 year old PC and found that the Core M doubled the battery life of the device, which is Intel's biggest generation-over-generation battery life improvement. The Core M computes twice as fast and performs graphics computations upto seven times faster than a processor present in an average 4 year old PC. 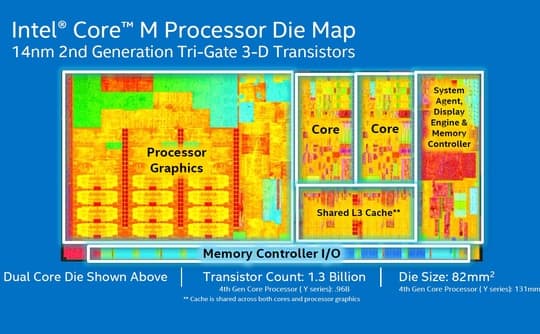 Again comparing to the previous generation, the new processor has a 50 percent less package size and gives off 60 percent lower heat. It operates at 4.5 Watts, whereas the 4th Gen Intel Core operates at 11.5 Watts. This could allow OEMs to design and produce sleek, fanless systems less than 9 mm thin. The devices that could feature the Intel Core M processor are:
The Core M versions will start from the 2.0 GHz Intel Core M-5Y10/5Y10a processors and the highest performing (and the last in the series) will be the 2.6 GHz Intel Core M-5Y70 processor which will also be equipped with Intel vPro technology for business 2 in 1s with built-in security features to help protect data, user identities and network access. Other features in the Core M series will be support for HQ audio, support for Intel Wireless Display 5.0, Intel's second-generation 802.11ac products and the series will evolve to support wireless docking with WiGig from Intel.

Samsung Electronics Co. Ltd. has launched new smart cameras in its WB series back in January. And today it has launched four from the series in India with Samsung WB35F,...
4.5k views
Read More →
Archives

105 famous people in one photo

How to get sponsorship for college event or tech fest? [Guide]