Kaustubh Katdare · Jul 26, 2013
Rank A1 - PRO
INSAT-3D, India's weather satellite which carries advance weather monitoring payloads has been successfully launched just a few hours ago at about 1:24 hrs (IST) with the Ariane-5 (VA214) launch vehicle from Kourou, French Guiana. The countdown for the launch lasted for about 11 hours and 30 minutes. The launch vehicle Ariane-5 lifted off right on the scheduled time and after a flight of about 32 minutes and 48 seconds, INSAT-3D satellite was placed in the elliptical Geosynchronous Transfer Orbit (GTO), very close to the intended position. The orbital parameters of the INSAT-3D as recorded are - 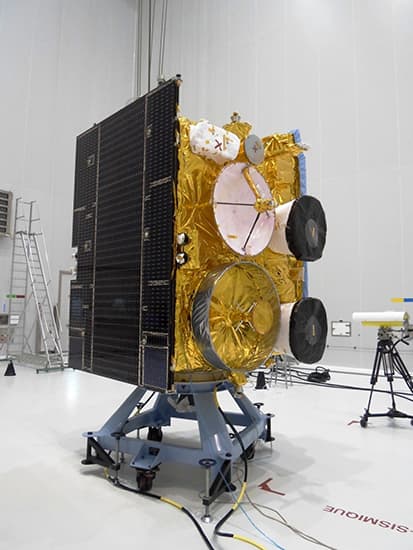 The ISRO engineering team will perform orbit raising maneuvers on the satellite. The INSAT-3D has been designed to use its ow propulsion system to put it in the 36,000 km high geostationary orbit. Once in its final place, the satellite will turn on meteorological payloads in the second week of August 2013 and will test them.

The INSAT-3D satellite is equipped with four payloads - imager, sounder, data relay transponder and satellite aided search & rescue. The imager will take pictures of the weather of the Earth and is more capable than KALPANA-1 and INSAT-3A, the other two geostationary satellites deployed in space by ISRO for weather services in the last 10 years.

The last payload, search and rescue picks up and relays alerts originating from the distress beacons of maritime, aviation and land based users and sends them to the mission control center. This system has been designed to speed up the search and rescue operations. ISRO has taken up the responsibility of end-to-end reception and processing of INSAT-3D data and the derivation of meteorological parameters with India Meteorological Department (IMD), New Delhi. An indigenously designed and developed INSAT-3D Meteorological Data Processing System (IMDPS) is installed and commissioned at IMD, New Delhi with a mirror site at Space Applications Centre, Bopal, Ahmedabad.