@Ankita Katdare • 18 Jul, 2015
Over the last few months, the US-based gadget brand InFocus has been steadily climbing the ranks on the Android smartphone charts in India. It launched several of its mid-budget smartphones over the course of last few months namely InFocus M330, M350, M530, M810 and the recent popular InFocus M2. Today, the company has announced the launch of the 4G LTE variant of the InFocus M2 handset now powered by a Qualcomm Snapdragon processor. Increasing the price of the older M2 by just 500 bucks, the new InFocus M2 4G is priced at Rs. 5,499.

The 1.2Ghz Qualcomm S400 Quad-Core A7 processor forms the core engine of the smartphone, whereas the Adreno 305 GPU stands for the graphics chip. The 1 GB RAM system memory chip on board is coupled with 8 GB internal memory (ROM) with microSD card extension supported up to 64 GB. The phone's 4.2 inch screen features a HD display with 355 ppi pixel density. The company boasts of its direct bonding screen that calls for brighter colours and anti-reflection JDI panel + LTPS low-temperature polysilicon screen imported from Japan. 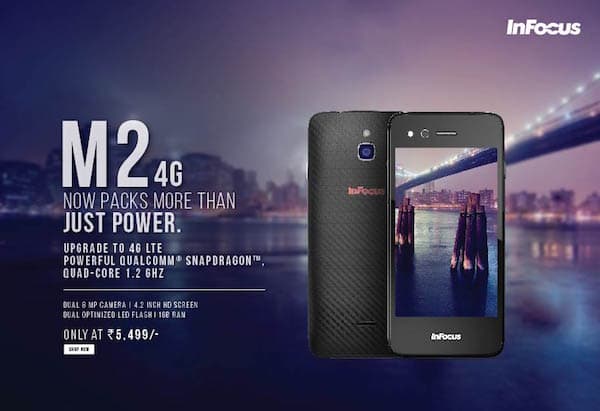 ​
On the exterior, the one feature to stand out is the phone's carbon fiber texture design manufactured using high-pressure transfer tech. The red logo on the rear end is pretty eye-catching too. Speaking of rear end, there's a no separate front and rear snappers. The phone comes with a single camera with 8 megapixel dual lenses with front and back AF, Smart LED fill light and F2.2 aperture. Interestingly, the round camera of its predecessor is replaced with refined square one giving it a different look.

Last but not the least, the phone comes with a 2010 mAh battery that should last the user the better part of the day. On the connectivity front, apart from 4G LTE, there's support for 3G, Wi-Fi 802.11 b/g/n, Bluetooth 4.0 + BLE and GPS. The InFocus M2 accommodates two micro SIM cards.

Basking in the glory of selling over 1.5 lakh units of the InFocus M2 smartphone, the company hopes that the M2 4G phone's handy design, good photo quality and a delightful price is what would charm the consumers.

Apart from these basic specifications, the company highlights Dual microphones, optical, proximity, G-force, magnetic and gyroscope among sensors, USB OTG support as well as the built-in InLife UI atop the Android operating system.

The Infocus M2 4G will be sold exclusively via Amazon.in in a flash sale on 24th July, 2015 at 2:00 PM. The company is expecting the phone to go out of stock in a very limited time and therefore has opened registrations on the site a couple of days back.

What are your thoughts about the new 4G-LTE powered InFocus 4G smartphone? Share with us in comments below.

Who are the cleanest people on Earth?

I've had my experience of losing about 600 mb of ubuntu .iso file while downloading from the Internet. So I'm now thinking can anyone explain how the 'resume download' works?...
5.2k views
Read More →
Archives

Raspberry Pi continues to be one of the most favoured DIY board around the world. I'd love to see all the interesting projects you are working on in your part...
8.8k views
Read More →
Archives

scope of testing as from fresher level

what is the scope of testing as a beginning from fresher level?
3.8k views
Read More →
Archives