@Ankita Katdare • 14 May, 2014
Huawei has launched 3 new phones - Huawei Ascend G6, Ascend G750 and Honor 3C in India today. The phones run on Android 4.2 Jelly Bean operating system and offer above average specifications. With different screen sizes and memory options, the phones are priced for different budget segments. For example, the Huawei Honor 3C is offered at a price of Rs. 14,999, whereas the Ascend G6 and Ascend G750 are priced at Rs. 16,999 and Rs. 24,999 respectively. The phones are available to be purchased on various online e-commerce portals in the Indian market. Let us take a look at the pictures, features, specs of each of these phones one by one.

Starting with Huawei Honor 3C - We have a phone that sports 5.0 inch screen with 1280 x 720 pixels display resolution. Running on the MTK6582 Cortex A7 quad core 1.3GHz processor, the Huawei Honor 3C packs inside it - 2GB RAM and 8GB ROM with 32GB microSD card support. There's an 8 megapixel camera on the rear with BSI sensor as well as LED Flash and a 5 megapixel camera on the front. This Dual SIM phone offers support for USB, Bluetooth, WiFi, GPS and FM Radio as well. A 2300mAh Battery runs this phone and offers it about 2 days of standby time. 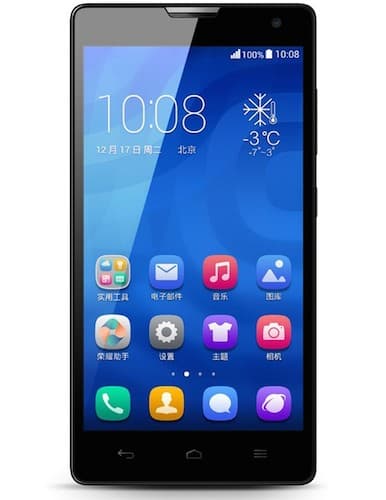 ​
The Huawei Ascend G6 offers a 4.5” qHD screen with 960 x 540 pixel resolution IPS display and 245 ppi density. Powered by 4 x 1.2GHz Qualcomm processor, the phone runs on Android Jelly Bean with EMUI 2.0 Lite. On the memory front, the Ascend G6 smartphone brings RAM - 1 GB, ROM - 8 GB and support for Micro SD Card up to 32 GB. Among the phone's connectivity options, you shall find - Wifi 802.11 b/g/n, BlueTooth 4.0, USB 2.0 and NFC. The Rear Camera is an 8 megapixel one with AF, BSI F2.0 and Flash. The one on the front is 5 megapixel. A 2000 mAh battery powers up this phone and gets it fully charged in about 3 hours. As you can see from the picture below, the Huawei Ascend G6 is released black with grey or gold and a white version with pink or gold highlights. 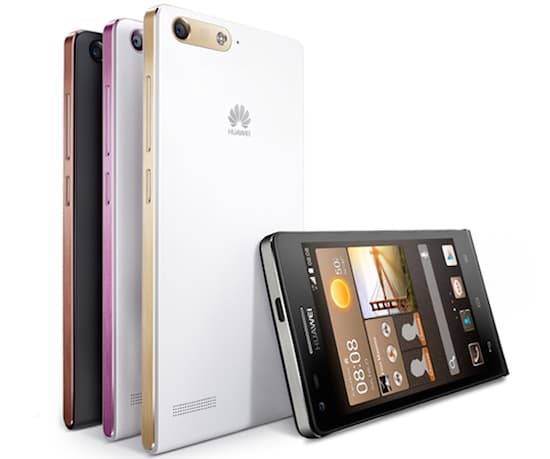 ​
Last, but not the least, we have Huawei Ascend G750 that runs on Android 4.2 Jelly Bean + Emotion UI 2.0. Powered by a 1.7GHz Octa-Core MTK and a Mali 450 GPU, the phone has a 5.5 inch IPS LCD touchscreen with 1280 x 720 pixel resolution. On the storage front, the Ascend G750 offers 2 GB RAM and 8 GB internal memory, of which about 6 GB is available. Thanks to external microSD card support the ROM is expandable up to 32 GB. This one is a Single SIM phone and offers Wi-Fi 802.11 b / g / n (2.4 GHz), Bluetooth 4.0 and DLNA among its connectivity options. There's a 13 megapixel camera with autofocus on the rear end and a 5 megapixel snapper with LED flash on the front. A Li-Polymer 3000 mAh battery powers up this phone.


​
The Huawei Ascend G6 was launched during the MWC 2014 this year alongside MediaPad X1 and M1. You may read about their specs and features comparison here. That's all about the important features and tech specs of these new smartphones from Huawei in India. How do you like their arrival in the country? Share your thoughts with us in comments below.
@Yogesh Borkar • 15 May, 2014 Huawei holds a strong brand position in global markets and hope it will be able to change the mobile market share in India.
@Rajni Jain • 15 May, 2014 • 1 like Huawei Ascend G6 is comparable to LG L90 smartphone. Only the difference is that LG L90 runs on android v4.4 kitkat OS while G6 runs on Android 4.2 jellybean.I will go for LG L90 with almost same price.
@Ankita Katdare • 15 May, 2014 @Rajni Jain That's some great input from your side. Thanks for sharing and keep them coming.
9.1k views

Who are the cleanest people on Earth?

Difference between ac and dc analysis and transient analysis?

Here's a draft of the official CrazyEngineers T-Shirt. The art has been created by @eternalthinker and rearranged by yours truly. Note that it's still a draft and everything's still on...
5.3k views
Read More →
Archives

HCL Technologies is currently developing one of its major development centers in Nagpur at MIHAN. HCL's executives has confirmed that they'll be recruiting about 2000 engineers - half of which...
6.4k views
Read More →
Archives