HTC One Max Specs & Features Detailed - Is The Price In India Justified At Rs. 56490?

@Ankita Katdare • 22 Nov, 2013
HTC, the Taiwanese smartphone manufacturer, has brought its much talked about smartphone - the HTC One Max in India today. At the launch, the company has shared the details about the phone's pricing. Let us take a look at the HTC One Max specifications and see if we think that the price and the features go hand-in-hand or not. The phone which could be called an elder brother to the HTC One, features a huge 5.9-inch screen that has 1080 pixel Full HD display. Powered by the 1.7GHz quad-core Qualcomm Snapdragon 600 processor, the HTC One Max is specially recognized for having a fingerprint scanner, situated on the rear end under the camera. This fingerprint scanner can be used for unlocking the phone as well as the users can assign different applications to various fingers. For example: users can configure the scanner to open the camera app when they use the left index finger and a browser with the right thumb.

Coming back to the HTC One Max's specs, we have a pretty lightweight handset at 217 grams and as far as the storage is concerned, there are two models available - a 16 GB one and a 32 GB one - both alongside the 2 GB RAM. The option of microSD card slot, can take the memory up to 64 GB. Deriving its power from a 3,300 mAh battery that delivers up to 25 hours of talk time, the smartphone runs on Android 4.3 and features UI improvements thanks to HTC's Sense. The phones supports micro SIM card for connectivity it offers support with 2G, 3G and 4G-LTE. Apart from these, the smartphone features a 3.5 mm stereo audio jack, support for NFC, Bluetooth 4.0 and Wi-Fi. 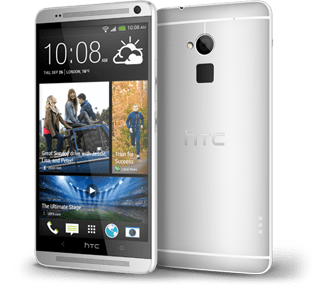 ​
Coming to the camera, which happens to be one of the premium features of this smartphone from the company, we have a HTC UltraPixel Camera with BSI sensor and HTC ImageChip 2f/2.0 aperture and 28 mm lens. The rear end camera supports 5 levels of flash automatically set by distance to subject. Users can do 1080 pixel Full HD video recording with HDR video. The front camera is a 2.1 megapixel decent one with 88° wide angle lens and HDR capability.

HTC also launched two accessories that go with the HTC One Max smartphone, namely - HTC Fetch and HTC Mini+. The HTC Fetch can be paired to your HTC smartphone through Bluetooth and is programmed to alert you whenever you go out of range. The Fetch is priced at Rs 2,399, while the Mini+, when paired with your HTC phone via Bluetooth, can be used to send text messages and make calls. HTC says this is useful for long calls as users may not always want to hold big phones for hours while talking. Another use of Mini+, HTC claims, is when users want to keep watching a video or playing music on the phone while talking.

So that's all about the specs of this smartphone. It is priced at Rs. 56,490 for the 16 GB variant in India. Here's a question to everyone - Do you think the price of the HTC One Max smartphone stands justified? Share your thoughts in comments below.
@Ankita Katdare • 22 Nov, 2013 Those who think that the phone is too large, check out the first look video.
HTC says that the HTC One Max is more screen size, more camera, more everything.

Acer One 10 2-in-1 Touchscreen Laptop Brings The Best Of Windows 8.1 At An Affordable Price

Acer India debuted their new creation Acer One 10 (S1001) as an Amazon India exclusive recently. This Windows 8.1 device works as a standalone tablet and when paired with its...
8.4k views
Read More →
Archives

Can somebody come out and give some ideas for final year project for physically challenged people.. I am not able to get any thing new. If any of u help...
14.7k views
Read More →
Archives

1. The passage given below is followed by questions based on its content. Read the passage & choose the best answer 4 the questions The Death Car It was cold...
6k views
Read More →
Archives