Honda India Launching New Scooter On June 12th. Would It Be The Activa-i?

@Ankita Katdare • 06 Jun, 2013
After Hero Honda, Kinetic Honda Motor Ltd and Honda Siel Cars India, Honda Motorcycles and Scooters India (HMSI) has been the Indian subsidiary of Honda Motor Company, Japan. The company is fast capturing the Indian automobile market both in two-wheeler and four-wheeler segment. It recently launched two bikes - Honda Dream Neo 110 and CB Trigger 150. Now, an image having invite that says - 'Ready to Fly?' (see image below) is being circulated across the web that says a new product will be announced by Honda on 12th of June, 2013. It was only earlier this year that HMSI revealed its plan to launch four new two wheelers every year in India.

Considering the fact that the two-wheeler segment has a huge market potential in India, Honda seems to be sticking to its plan and by March 2014, it aims to expand their annual capacity to 46 lakhs units. Capacities at all three HMSI plants at Manesar, Tapukara and Narasapur will be augmented to reach this target. The company’s third plant at Narasapur Industrial Area, near Bangalore, was inaugurated and initial capacity will be to the tune of 1.2 million units, while a third assembly line will be added by March 2014 which will increase capacities by 600,000 units. 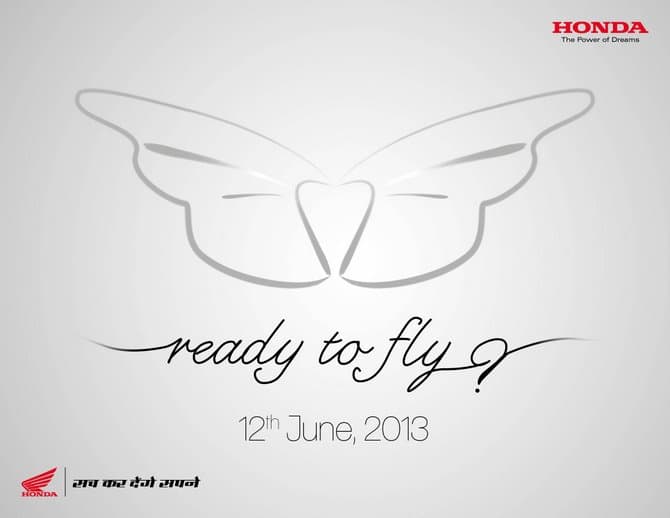 Now there's not much information for doing some guesswork about this new scooter that will launched on June 12th. But, according to a tweet, this new vehicle is a scooter called Activa-i. We are already aware that Honda's redesigned Activa is selling like hot cakes in India - This statistic has become clear from the fact that currently 1 lakh customers are awaiting delivery of the Activa in a variety of South Indian cities. And now, if certain news sources are to be believed, there's a chance that Activa-i will be in the 125cc segment and feature a 109cc HET four stroke engine. If Honda plans to take the design of the current Activa to the next level, we might be seeing Activa-i getting DRLs and LED tail lamp.

With so many production plants in place, we are just hoping that Honda ensures shorter waiting periods for customers. What are your expectations from the new Honda scooter? We look forward to your comments in replies below.
@Ankita Katdare • 06 Jun, 2013 If it actually is a launch, we could be getting the Honda CBR 400 or the CBR 500. There have been subtle hints about either of these bikes hitting our markets after their official launches in Japan and US. No one expected Honda to unveil the CBR 150R at the Auto Expo in 2012, but they did.

But seeing that it is a butterfly they're showing off and the really curvy font that they've used, it doesn't seem like a powerful bike. (Nothing against feminist expression) But chances are hight that it must be a new scooter.
@Ankita Katdare • 06 Jun, 2013 Yes. Chances of a scooter launch are definitely higher. I see that it could rival Suzuki Swish and Mahindra Rodeo once it hits the roads.

This year also saw this Japanese giant surpass Bajaj Auto to seize the second position in the world’s largest two wheeler market (Indian two wheeler market overtook that of China last year with an estimated annual demand of 40million units). It has to be said that parting ways with Hero has done a world of good for Honda.
@lovebox • 10 Jun, 2013 Well all guesses point to the Activa i. Hope to be right on this one.

AbraKaDabra
lovebox Is that really the official image of Activa-i?
It looks like a mash-up of Pleasure and TVS Streak.

Not sure if its the official image, but it the most likely one as I had heard from someone working with them that they are working on designs similar to the Aviator. Going by that, it does look like the one they are planning to launch.
Apologies in advance, if it does not turn out this way.
6.5k views

Oppo N1 Featuring Rotating Camera To Launch In India - Best For Your Next Selfie?

Just a couple of weeks back, we told you about ASUS's Teaser For Computex 2013. Though not a lot of fanfare, but ASUS did make its mark and created a...
3.8k views
Read More →
Archives

How good is M.Tech Mechatronics

I currently took admission in College of Engineering, Pune, Maharashtra, India for M.Tech Mechatronics. I would like to know the opportunities of doing this branch. Also if anyone could provide...
8.2k views
Read More →
Archives

With our cameras going full HD and the world moving over to 4K videos, it's no surprise that our digital data storage needs are going to grow exponentially in coming...
9.8k views
Read More →
Archives

The other day, I was at a local computer shop to buy LAN cable and I asked for a Cat6 one. The guy simply opened a box and asked how...
24.6k views
Read More →
Channels
👨‍💻 Remote Jobs 🗞️ News 🚀 Founders Circuit 🗄️ Archives ✨ Newsletter 🕹️ Changelog
About · Privacy · Terms of Service · Contact Us · © 2005 - 2022 CrazyEngineers. All rights reserved.