@Chaitanya Kukde • 05 Jul, 2014 • 2 likes
Keeping in mind an ever-growing class of 'mileage-oriented' bike commuters, Honda had launched the 'Dream' series in the budget bikes segment by launching the 'Dream Yuga' in January 2012. After the enormous success of Dream Yuga, Honda then launched Dream Neo in 2013 and has now launched the Dream CD 110 which is the third and probably the last bike in this series. The Dream CD 110 is priced Rs. 5000 below the Dream Neo and Rs. 7,000 below the Dream Yuga, making it Honda's most affordable two-wheeler in India.

Boasting the formulaic 110 cc engine used throughout the 'Dream' series, Honda has made no significant changes to the engine specs in this bike. The engine spews out a maximum power at 7,500 rpm and 8.63 Nm of torque at 5,500 rpm. Perhaps the most striking performance of this vehicle is in the mileage category, an impressive figure of 74 Kmpl, as reported in Honda's internal test rides but not yet verified by any external reviewer. Once again, the company's flagship Honda Eco Technology (HET) has been put to use to achieve this mileage. The engine specifications are exactly the same as its companion in this series, the Honda Dream Neo. 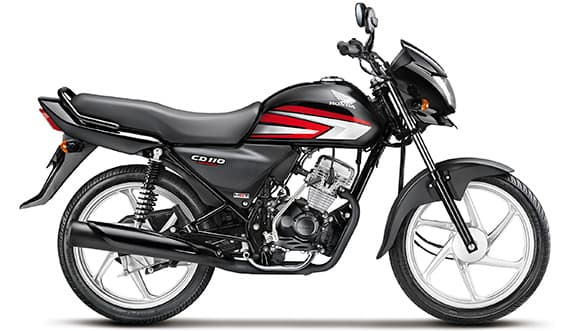 ​
CD 110 Dream will feature only a manual start. Body graphics, silver-coloured engine sleeve, silver toned alloy wheels and matching meter console make up the style quotient of the bike. Buyers will have an option of buying spoked wheels if not alloy ones. The bike also features tubeless tyres, maintenance free battery, viscous air filter as its plus points. Continuing the tradition of the Dream series, disc brakes won't be added to the bike and the safety of the CD 110 Dream will rely on traditional drum brakes, perhaps the only down point in the bike.

The Honda CD 110 Dream, a more economical version of the Dream Neo is priced at Rs. 41,100 ex-Delhi, making it the most inexpensive two-wheeler by Honda in the country. Honda will be starting dispatches across the country from mid-July and sales will start from August '14. CD 110 will be available in 3 colours- Black with Red stripe, Black with Blue Stripe and Black with Grey stripe and in the kick/drum/spoke variants.

Hero Honda's CD 100 had found a large Indian fanbase and some of them can also be seen running today. The nomenclature “CD” is a mnemonic for Honda’s mass motorcycles in many countries since 1966 while Dream evokes the legendary success of Honda’s first mass motorcycle “Dream D” launched in 1949 in Japan. Do you think the CD 110 Dream will live up to its name? Let us know in the comments.

Source: Overdrive India
@Sarathkumar Chandrasekaran • 05 Jul, 2014 Great news from Honda bike lovers. Honda has a strong reputation and at this price tag of 41K, Honda definitely poses threat to Hero, Suzuki, mahindra, Bajaj, etc. Absence of Electric start is only a main drawback which i consider over disc brake. I dont think disc brake would be necessary one for less cc bikes.
@Ankita Katdare • 05 Jul, 2014 Just remembered the time when we had covered the Honda Dream Neo bike.
https://www.crazyengineers.com/threa...d-will-it-be-on-young-indias-wish-list.67689/

Before this bike's arrival, the only bikes under the Rs. 45,000 price tag were -
Bajaj Platina, Honda Dream Neo, Bajaj Discover 100 and I guess.. TVS Star City.
I read an interesting comment about Honda's strategy somewhere today.
They started from 150cc Unicorn and ended in 110cc CD110.
This can be called exactly the reverse strategy of Hero-Honda which started with CD100 ss and ended at 150cc.
@Sarathkumar Chandrasekaran • 05 Jul, 2014 • 1 like

Ankita Katdare
Just remembered the time when we had covered the Honda Dream Neo bike.
https://www.crazyengineers.com/threa...d-will-it-be-on-young-indias-wish-list.67689/

Before this bike's arrival, the only bikes under the Rs. 45,000 price tag were -
Bajaj Platina, Honda Dream Neo, Bajaj Discover 100 and I guess.. TVS Star City.
I read an interesting comment about Honda's strategy somewhere today.
They started from 150cc Unicorn and ended in 110cc CD110.
This can be called exactly the reverse strategy of Hero-Honda which started with CD100 ss and ended at 150cc.

Yes i agree but i prefer a electric start facility over disc
@Chaitanya Kukde • 05 Jul, 2014

To each man his own 😁
@S Tiwari • 08 Jul, 2014 This launch of CD 110 by original Honda will certainly give Munjals owners of Hero Honda sleepless nights even today and days to come I am sure,as CD 100 is brand that was good for quality and mileage nearly 3 decades and Hero Honda discontinued that model and Honda grabbed it with Higher Power CD 110
@Bella Edward • 14 Dec, 2014 Good bike!but honda dream yuga is much better.
23.4k views

Hola folks! CrazyEngineers brings you a Quiz Contest on account of 'Engineers Day 2015'. Since thousands of you will be flocking the site on 15th September, 2015 - we thought...
4.4k views
Read More →
Archives

I'm doing btech in Electrical & Electronics. I want to know the core companies in this field which offer a handsome salary (around 6-8lakhs) for freshers. And also tell me...
6.6k views
Read More →
Archives