@Ankita Katdare • 20 Feb, 2014 • 2 likes
It was recognized that Holography could become the future of data storage with the capability to read-write huge amounts of data in a parallel way. The technology has been put in action by a research team from University of California, Riverside Bourns College of Engineering and Russian Academy of Science. The team has developed a new holographic memory device that shows unprecedented storage and processing power. Introduced in 1940s, the first holograms used electron microscopes and with time we advanced from optical holographic images because of laser and later went on to develop acoustic holograms as well as using microwave holography widely used in radar systems.

By replacing optical beams with spin waves, which have compatibility with conventional electronic devices and also the ability to operate at a much shorter wavelengths, the researchers have been able to develop smaller electronic devices with greater storage capacity. Moreover, using the combined advantages of wave-based information transfer with magnetic data storage, they have developed a magnonic holographic memory device by applying holographic techniques developed in optics to magnetic structures. The results in their experiments with this were successful. 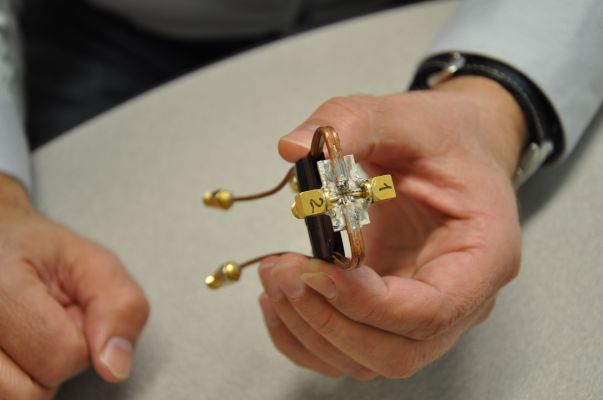 ​
Alexander Khitun, who is a lead researcher from UC Riverside on this project has published a paper “Magnonic Holographic Memory,” in the Applied Physics Letters journal, with co-authors Frederick Gertz, a graduate student who works with Khitun at UC Riverside, and A. Kozhevnikov and Y. Filimonov, both of the Russian Academy of Sciences. As per the experiments published in this paper, a pair of magnets (memory elements representation) were aligned in different positions on the magnetic waveguides. The experiments were conducted using a 2-bit magnonic holographic memory prototype device at room temperature.

Most people know the use of holography as a technique to build holograms (images) using laser, interference, diffraction, light intensity recording etc such that the image changes as the position and orientation of the view changes in exactly the same way as if the object were still present, thereby making the image appear three-dimensional. What do you think about the use of holograms in the enhancement of modern storage and processing devices? Share your thoughts with us in comments below.

The mid-range smartphone market in India has got a worthy addition in form of the Intex Aqua Ace. The Intex Aqua Ace offers all the things you want from a...
3.9k views
Read More →
Archives

GSM and GPS interface with Arduino

i want any one to help me in my project . my project is to take infromatiom from gps module and send this information by gsm module to no. and...
8.9k views
Read More →
Archives

what to be learn after core java