If you take a look at the motorcycle's specifications list, you will find a 57.3 x 57.8 mm Bore x Stroke and CV with CCVI Carburetor Controlled with Variable Ignition. The bike features Advanced Microprocessor Ignition System and supports self start as well as kick start. There's a multiplate wet clutch and tubular diamond type frame. Front suspension is telescopic hydraulic, whereas the rear suspension is rectangular swing arm with 5 step adjustable gas reservoir. The dimensions of the bike are as follows : Length - 2060mm, Width - 765mm, Height - 1145mm, Wheelbase - 1325 mm and Ground Clearance - 145 mm. The Hero Xtreme 2014 has a 12.1 litre fuel tank capacity and a Clear Lens, Multi Reflector Type lamp. 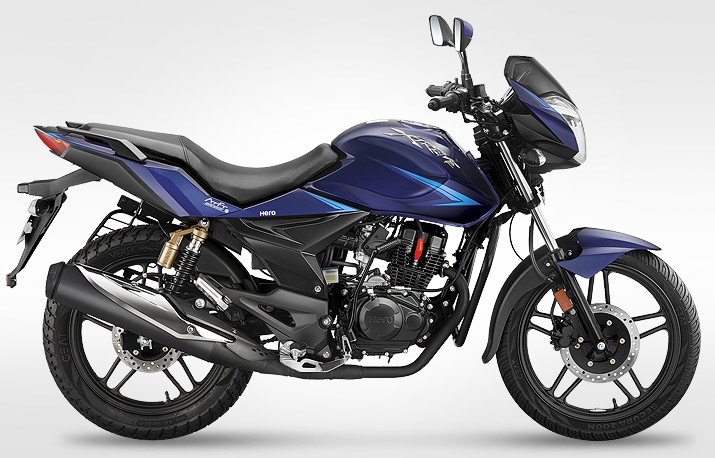 
​
Hero has launched the bike in two trims - a front-only disc version and double disc brake (both front & rear), priced at Rs. 68,725 and Rs. 71,725 respectively (ex-showroom Pune). The official release date of the bike is today i.e. 22nd April, 2014 and the bike is available on sale at company's showrooms across the country.

How do you like the looks, features and specs of the new 2014 Hero Xtreme in India as against to its price? Share with us in comments below.
@Ankita Katdare • 22 Apr, 2014 Tagging the people who might be interested in sharing their views on the newly launched bike in India
@Shrikant Bedekar @Pensu @Anoop Kumar @SarathKumar Chandrasekaran @lal @Kaustubh Katdare @Satya Swaroop Dash @zaveri @Ambarish Ganesh
@Sarathkumar Chandrasekaran • 22 Apr, 2014 • 1 like @Ankita Katdare
" The bike features
Advanced
Microprocessor Ignition
System" Is this one related to earlier released fuel efficient start stop system?
Hero has not done well in 150cc category because Bajaj and Yamaha were on roll with better bikes but we have to wait to see whether it was fit for race.
My opinion: Dont like the front part especially dome but rest is well designed.Specs look decent and we have to wait to see tge winner.
@Kaustubh Katdare • 22 Apr, 2014 Good looking buy, but nothing that'd make me drool. I really want to see a bike that gives me stunning looks, comfortable ride and zero maintenance. However, disk brakes on both front and rear tyres is a good thing. Wondering how does this bike compare with the Pulsar 200NS.
@Yogesh Borkar • 22 Apr, 2014 • 1 like The bikes aerodynamic and Sporty design looks awesome as compared to regular Hero designs, mobile charging facility and
wider tyres gives added advantage. I think Hero will capture market in the 150 CC category with Xtreme.
@Ankita Katdare • 22 Apr, 2014 That's great. Looks like the the Xtreme motorcycle is receiving quite neutral reviews from bike enthusiasts. 👀
Looking forward to more comments from members.
@Vikram S Bargah • 22 Apr, 2014 • 1 like Amendment: Its has 5 speed gear box.

With the above specification Hero moto corp tries to regain its slow moving 150 cc segment . Features like digital console are already available with other brands. It is going to be competing with much more popular Bajaj Pulsar 150 (which is still topping the chart)

P.S: Was expecting much more from HMC .
@Pensu • 22 Apr, 2014 • 1 like Nothing much impressive. Looks okay, the wider rear tire is a good move. But I don't think with FZ and Pulsar-150, they have much of a chance. Price is appealing, but there are better things available in market. Mobile charger is good advantage, but the digital console looks a little weird. Having a ton of features makes things messy, but may be, it will work for Hero!
@zaveri • 22 Apr, 2014 • 1 like The mobile charger thing appeals to me. the body looks some what like CBZ. The headlights are somewhat like that of Discover
@Ankita Katdare • 24 Apr, 2014 @zaveri You guessed it right. Earlier, the bike was known as 'CBZ Xtreme'.
In this model the company has let go of the term 'CBZ'.

Overall, it seems to me that Honda took away the design and makeover team along with them 😁😁
@Sarathkumar Chandrasekaran • 24 Apr, 2014 @Ankita Katdare Do you think Hero can sustain in 150cc segment?

Honda has always been the best in terms of their bikes and performance.Hero's solo performance hadn't impressed the market a lot.
@Ankita Katdare • 24 Apr, 2014 That's a good question.

According to a report on Economic Times (if the numbers are to be believed), just an year after Hero MotoCorp and Honda Motorcycle and Scooter India (HMSI) parted ways - Honda has beated Hero by a significant margin.

According to Siam (Society of Indian Automobile Manufacturers) data,
Hero’s sales in bikes with engine capacity between 125cc and 150cc declined by a steep 53% while HMSI’s volumes went up by 76%.

Hero Xtreme has a lot to catch up to its competitors.
@Anoop Mathew • 27 Apr, 2014 Fact is that, it's about the 'sides of the bike' that need to be appealing.

The CBZ Xtreme was a huge bike, and there's nothing crazy about it. Even the TVS Apache (which most people don't buy) looks much more aggressive that this variant.

Hero never really did anything to boost the styles. All the bikes look similar on the front. Why can't they come up with some innovative designs? Is there a rule to keep the front light as dumb-looking (from the side) as all other models? Wake up Hero!
@Ankita Katdare • 08 May, 2014 I can't agree more with @Anoop Mathew It is high time that they bring innovative designs in budget motorcycles in India. Why are we still on the same-old same-old looks?
@dhaval112 • 10 May, 2014 head cowl is badly designed. they stupidly reduced the wheelbase too.
@jaison rebello • 14 May, 2014 • 1 like Hmm nice article ...best thing wat i found in dis byk iz Charging port I needed This so badly coz i use my phone for Gmaps n navigation while city surfing n for long rides big problm was battry dieyin out in 2 -3 hrs n using power bank was painfull, Hope this trend continues with bikes with bigger Mills also . Abu d Byk not so gr8 1 in competion New rtr 160 white looks better ,gixxer n 200ns are far modern but definetely far better dan old CBZ with CHEEK Indicators Big masculine tank n monoshock could have been a welcome change though n u cannot call 110width tyres Wider ones headlight shud hv been more naked n agressive
@soumya k dey • 12 Jul, 2014 • 1 like Its only hero Xtreme.its grate bike,i bought o 7 jul alredy running 482 km.its so comfort,pickup,& tech spece
@Bella Edward • 14 Dec, 2014 Quite good in performance but low mileage :/
21.9k views

Hey guys... Some one please suggest me a Best Book for Manufacturing Science & Technology..... The BEST one to understand and for all competitive exams.....
9.5k views
Read More →
Archives

The Blue Whale challenge has already claimed multiple lives around the world and now, there's a 'Pink Whale' challenge. But there's nothing to worry about the Pink Whale, because it...
8.8k views
Read More →
Archives

can any1 send me aptitude paper of thoughtworks and the question that were asked in interviews
5.3k views
Read More →
Archives

The Tiger, the Man and God A man was being chased by a tiger. He ran as hard as he could until he was at the edge of a cliff...
39.1k views
Read More →
Archives