@Ankita Katdare • 03 Apr, 2015 • 1 like
Daily commuters via rickshaw, take a note! Hero Motocorp Ltd, the Indian motorcycle and scooter manufacturer based in New Delhi, has ventured into manufacturing auto-rickshaws for the crowded Indian roads. Named Raahii, these electric powered e-rickshaw is powered by a 1,000 W motor and Hero Electric claims that, on a single charge, it can run for a distance of 90 kms. Designed as per the ARAI guidelines, Raahi e-rickshaw has been manufactured using easy-to-repair components and coms with a 5A, 36MOSFET controller, a SMPS based charger and a 12V, 100 AH battery. Weighing about 190 kgs, the e-rickshaw is said to have a set of features that sets it apart from the rest. Let's take a look.

Most e-rickshaws in market today do not provide useful features for the driver. Hero Electric wants to take the comfort of the driver a notch higher and therefore it brings a reclined seat, spacious legroom, floor mats, an internal L.E.D. light and a USB mobile charger for both the drivers and the passengers. 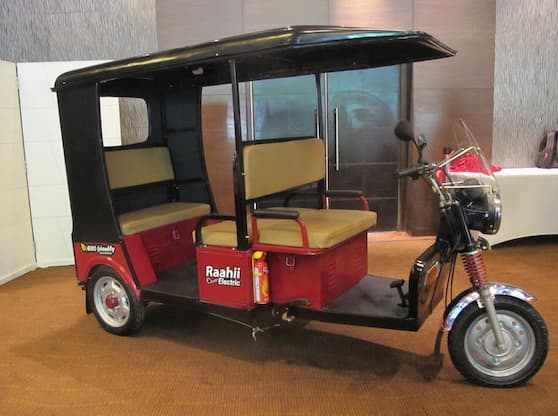 Image Credit: Motoroids​
One of the major problems in Indian rickshaws is that they come with welding done at the joints, which are not always executed properly. You must have seen the welding appearing crooked at the arm rests and even the roof. Not only do these look poor, but also suffer the problem of rusting. Hero's e-rickshaw 'Raahii' comes with a solution for anti-rust body with a nut and bolt under cover chassis (Epoxy Resin) and 3mm thick L-Plate gussets at the joints. Moreover, this e-rickshaw comes with a double coated paint (25-30 microns thick) not only on the surface, but the front & rear of wheels and under chassis parts.

With the additional space in the legroom and comfortable seats, Raahii hopes to become the preferred ride of thousands of daily commuters. While the company is gearing up to sell the e-rickshaw through more than 120 Hero Electric dealerships, it also has plans to launch an upgraded version of Raahii rickshaw. Moreover, the company also wants to head south and capture the market in the southern states of India.

What are your thoughts on the new e-rickshaw by Hero Electric? Share with us in comments below.
7.4k views

Oppo India has recently revealed the Oppo F3S Smartphone in a press meet on Thursday. The device comes with the much rumored dual selfie camera and also plays host to...
6.6k views
Read More →
Archives

What is the function of encoder in servomotor?

I heard that servomotor uses an encoder? Whats the function of encoder in servomotor?? I am working on one of the machine which is used for tabbering and stringing of...
9.4k views
Read More →
Archives

Just created a whatsapp image that you can share with your friends and fellow engineers. Instead of just forward 'Happy Engineers Day', let's educate people about the reason.
5.6k views
Read More →
Archives

Do Certificates Matter In Campus Placements?

hello moderator, sir i m pursuing btech in it field. Now i m in 3rd year.Can u suggest me whether certificate matters in the incampus or offcampus placements? I have...
9.8k views
Read More →
Archives

How to fix Whatsapp "Failed. Out of memory. Please try again later." error?

WhatsApp has been showing the nasty "Failed. Out of memory. Please try again later." error message whenever I send multiple photos to a group or any of my content. After...
31.2k views
Read More →
Channels
👨‍💻 Remote Jobs 🗞️ News 🚀 Founders Circuit 🗄️ Archives ✨ Newsletter 🕹️ Changelog
About · Privacy · Terms of Service · Contact Us · © 2005 - 2022 CrazyEngineers. All rights reserved.